On the Fat Athlete 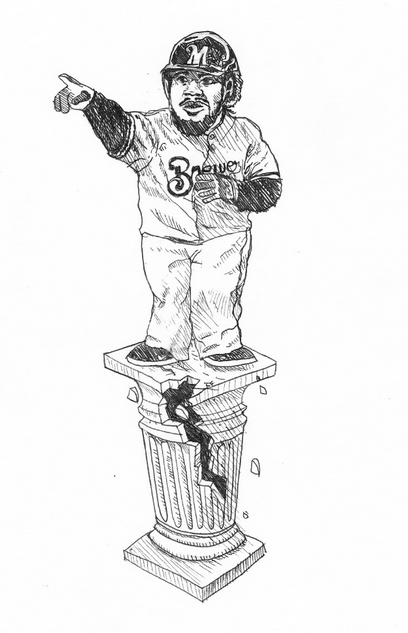 “There are two different shapes, one for fitness, one for throwing the ball.” – Hyun-Jin Ryu, SP, Los Angeles Dodgers

Some athletes are just perfect. Melding physical ability and mental execution, they make the superhuman look mundane. Their movements are beautiful, graceful, effortless. Every sport has a few figures like this—LeBron James, Mike Trout, Adrian Peterson. These men, watched primarily by other men from their sofas, reify the ideal masculine form: broad shoulders, muscular chests, lightning-quick agility that belies a large frame. At any given time in the sports cultural arena, however, there are a handful of professional athletes whose bodies are indisputably imperfect—rounds of fat disguising muscle, spilling out of sleeves into shapes that resemble the average American couch potato’s form far more than they resemble that of the athletic elite. The fat athlete, always already male, aids in the creation of the American male sports viewer as a subject—he keeps us watching, a reminder that we’re not as far away from our idol figures as it seems. When we watch a fat athlete, we see ourselves.

We typically slap the fatness label on our most visible figures. Behind the walls of a doctor’s office, you’re “overweight”; in the pages of The New York Post, you’re “fat.” It’s a term loaded with disabling potential: to be fat is to not be fit. Most figures in popular culture have power sapped by the label of fatness—Oprah, for example, battles it constantly, as a slim figure seems necessary for a daytime talk show host to mirror what her demographic desires. But in athletics, the main demographic—males in front of large screens—desires both the elite athletes and the visibly unathletic.

Major sports embrace many imperfections (some in athleticism, others in skill), often disguising shortcomings by calling players “specialists.” Basketball general managers focus on players who can shoot three pointers and defend the perimeter, skills that complement the elite scorers and shot blockers. Football teams feature an entire offensive line responsible for protecting the quarterback, yet the players arenever intended to touch the ball.

Baseball, however, presents an exception. Rather than suggesting that player specialize, baseball builds in plenty of slack for its non-elite athletes: hitting a ball over the fence earns a leisurely trot around the bases, pitchers rarely have to run, and the American League features a designated hitter, who sits on the bench when he’s not at bat. Elite athleticism can be a huge advantage for a player, but lacking peak physical capabilities rarely prevents superstardom. In football and basketball, one weak link will break the chain, but in baseball, players are isolated enough so that one physically incompetent athlete minimally influences the way the rest of the team plays. Writers label the rare, once-in-a-generation baseball talents “five-tool players” for their ability to hit for power, hit for average, run, field, and throw, but everybody else has acknowledged shortcomings. In baseball, fat is not an exclusionary term.

The list of prominent fat baseball players—past and present—is impressive. David Wells, 6’3” and 250 pounds, won 20 games for Toronto in 2007. Mo Vaughn, 6’1” and 275 pounds, took home the American League MVP in 1995. Tony Gwynn, 6’0” and 225 pounds, holds the San Diego Padres record for stolen bases. And of course, Babe Ruth, arguably the game’s greatest slugger, had more than a bit of a beer belly.

The inherent contradiction of a professional athlete attempting to overcome his own lack of athleticism fuels some of baseball’s most compelling moments. In 2003, Blue Jays catcher Greg Myers barely made it around the bases after a botched play in the outfield led to an improbable inside-the-park homer. After scoring the run, he lay down in the dugout, winded. His teammates left an oxygen mask, a can of red bull, and an IV by his locker after the game. In 2007, Milwaukee Brewers first baseman Prince Fielder—listed generously at 275 pounds—lifted a pop up to straightaway center field that should have been an easy out. The centerfielder lost the ball in the domed stadium’s lights and the ball dropped. Fielder picked up his pace, breaking from a run into an all-out sprint. What should have been a simple prerequisite for a professional baseball player—the ability to run the bases successfully and all at once—became a study in contrast: legs developing horizontal momentum and beginning to move independently of an upper-body that gyrated vertically, grinding around the bases until the tension exploded outward in one unwieldy lunge for home plate. Fielder was unable to stop himself, running straight from home into the Brewers dugout, nearly tripping on the top stairs. Fielder became the 3rd heaviest player ever* to score an inside-the-park homer, and found himself the butt of many jokes—even though Fielder traveled 360 feet of basepath in 16.1 seconds, an average of about 15 miles per hour and a major athletic feat for a man of his girth. At 5’11” and 275 pounds, Fielder has a body mass index of 38.4, qualifying him as clinically obese.

In baseball, the challenge of player vs. body is commonplace enough that broadcasters tend to give masking euphemisms to overweight players. When a baseball player overflows in his uniform, he’s “husky,” “burly,” or “a big guy.” Any ESPN broadcast of a game CC Sabathia pitches is sure to contain at least two of those phrases. The euphemisms come from affinity, a vested interest in seeing the un-athletic succeed. In other sports, that’s not always the case. Large basketball players are “fat,” “soft-bodied,” or simply “out of shape.” Basketball’s up-and-down pace makes it far tougher to disguise exhaustion, and attitudes towards those who can’t keep up are rarely forgiving. Coach Greg Popovich of the San Antonio Spurs joked that one of his players, Boris Diaw, whose frame resembles a 6’10” body pillow, had “never been in shape.” As the New York Knicks were eliminated from the 2012 playoffs by the Miami Heat, ex-player and broadcaster Reggie Miller suggested that Knicks star Carmelo Anthony would “have to be in better shape next year” for the Knicks to succeed. Anthony’s trainer vehemently denied the accusation: “He’s not a fat ass, man. He’s a world-class athlete.”

Broadcasters aren’t the only ones using larger athletes as pointed examples. Deadspin kept a list of prominent baseball weight gains and their bogus explanations at the beginning of the 2012 season. Bleacher Report has published numerous slideshows of fat athletes. Four days after Prince Fielder’s improbable trip around the bases, The Onion joked, “Prince Fielder Dies of Inside-The-Park Home Run.” Large athletes also work particularly well for advertisers seeking a connection with the typical couch-bound male viewer. Shaq appeared in ads for Buick based on his status as a “size authority,” selling the luxury and comfort of a car interior that moves mechanically like a la-z-boy.  Donovan McNabb and his also-large mother sold Chunky Campbell’s Soup, appearing at construction sites and in living rooms to deliver a hearty meal to men in deep states of work and leisure.

The fat athlete is one of the great American characters: there’s something impossibly endearing about watching people who look like normal schlubs accomplish great things. We set them up by demeaning their physique—suggesting, as ESPN’s John Hollinger did, that Boris Diaw ate Chris Paul—or by imposing upon them a nickname that mocks their cuddly nature—Pablo Sandoval is “the Panda,” Juan Uribe is “the Uribear.” This systematic lowering of expectations makes the payoff of success even greater. Diaw will make a surprisingly graceful finish at the rim and earn extensive praise from the broadcast crew, Uribe and Sandoval will make diving plays at third base that prevent extra base hits.

In couch culture obsessed with the male body image, there’s an element of magic to those who can match the super-bodied without their super bodies. When we talk about LeBron James, we talk about the superhuman, the way he drives from the perimeter to the hoop under such control that he hardly appears to move at all. When we talk about Prince Fielder, what we admire is the humanity, all the work and strain that go into simple mechanics. The fat athlete tethers fan, television, and sport together; he’s a figure of extreme identification and relief for any male on the sofa. When Juan Uribe takes a particularly bad swing, so bad that he falls first backwards, then over onto his knees and stomach, weight shifting unexpectedly as the bat flies out of his hands, it enables the couch potato to look down at his body and think, “hey, it’s not totally impossible for that to be me.”

*Kyle Blanks of the San Diego Padres holds the record at 285 pounds, but he’s a full six inches taller than Fielder and hardly appears overweight.

TRISTAN RODMAN B’15 was a fat athlete once, but it was in elementary school and maybe not so compelling.