Mayor Elorza's plan to privatize the Providence water supply board 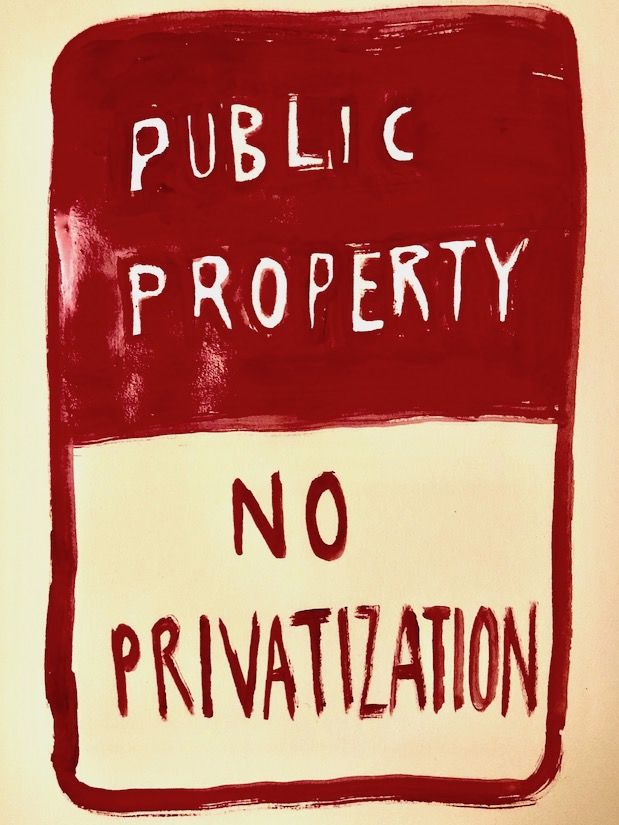 The story of the Scituate Reservoir holds its own in the annals of Rhode Island history. A gruesome tale of eminent domain and the state’s monopoly on the use of force, it began in 1915 when the Rhode Island General Assembly approved the state’s largest public works project in history: a plan to flatten and flood five villages in the town of Scituate in order to build a reservoir to provide clean water for Providence residents.

Water for the City of Providence and nearby cities had previously been provided by the Pawtuxet River. However, due to a growing population and the widening radius of water customers, it had become apparent to city and state officials that the current water system was not sustainable. When word of the plan to build the reservoir — which would displace 1,195 buildings including homes, stores, mills, and churches — reached Scituate, townspeople resisted, to no avail. According to local historian Ray Wolf’s account, a few farmers took their own lives in despair. The land was flooded, and the population of Scituate decreased by 24 percent between the 1920 and 1930 censuses as residents moved elsewhere.

The most memorable part of the story for local historians is the fact that most citizens of the now “lost villages of Scituate” were not aware of the General Assembly’s plans until they were nearly finalized. The vote to flood the Scituate residents’ homes and separate their communities—to provide water for people they didn’t know—was made without the input of those who had the most to lose.

Today the Scituate Reservoir provides water for 60 percent of the population of Rhode Island and contains about 39.7 billion gallons of water (or, as the Providence Water website explains, “60,221 Olympic-sized swimming pools,” which clarifies very little for those trying to picture the reservoir). Amid concerns over Providence’s budget deficit and unfunded pension burden, Providence Mayor Jorge Elorza, who was sworn in for a second term on January 7th, has proposed selling or leasing the Providence Water Supply Board (PWSB), which delivers water from the reservoir to consumers in Providence and nearby towns.

Privatizing (or “monetizing,” as Elorza prefers to call it) the water delivery system will allow Providence to earn an estimated $400 million, at the expense of ratepayers who will inevtiably face rate hikes, and PWSB customers who don’t live in Providence and will thus be bearing the cost of a different municipality's budgetary woes. Critics of Elorza’s plan argue that the inevitable rate hikes and health risks that would follow privatization will disproportionately impact the poorest customers, placing the pension burden on those with the least means.

Addressing budgetary concerns has been at the top of Elorza’s agenda as mayor. Last month, speaking to a crowd that showed up for his inauguration on the steps of City Hall in frigid temperatures, “Four years ago, the talk of bankruptcy was still in the air and there was a real fear of the city going under. Now, we’ve stabilized our finances and are shifting the conversation to our long-term health. We’ve paid off the deficit, improved our credit rating, created a rainy day fund and are now in the strongest financial position we’ve had in decades. It’s safe to say that four years ago, no one thought this was possible. But together, we did it!” In 2012, Providence faced a $110 million deficit and was on the brink of bankruptcy. Mayor Elorza’s predecessor, Angel Taveras, reduced the deficit by closing schools, raising property taxes, cutting benefits for the city’s union employees and retirees, and encouraging non-profits such as Brown University to make “payments” in lieu of property taxes (from which non-profits are exempt). As a result of Mayor Taveras’ slashing, Mayor Elorza faced only a $13.4 million cumulative deficit when he took office. However, long-term liabilities including pensions, remained unfunded.

A handful of activists showed up to the inauguration holding signs opposing Elorza’s plans for privatization. Angel Lopez, treasurer of Climate Action RI, said in a statement, “Selling or leasing our water is not a solution to the city's pension problem.  Ratepayers and residents should expect rate hikes and poor water quality instead.” Lopez is also a member of a small coalition that has formed to organize against Elorza’s plan, but the coalition has not yet made any public statements.

On January 9, two days after Elorza’s inauguration, three water companies entered requests for qualifications (RFQs), including Boston-based Poseidon Water; Veolia, the world’s largest water service supplier; and Suez North America, a French company. However, the city will need approval from the state General Assembly before it can lease the PWSB. If the General Assembly passes a bill authorizing the sale, the city will make a request for proposals/bids (RFP) for companies to submit bids.

Water is distinct from other public utilities across the United States. Unlike electricity, natural gas, internet, and telecommunications, water (and sewage) have largely been municipally controlled since the turn of the 20th century. Most other utilities are owned by private companies (for example, natural gas and electricity are delivered to most Rhode Islanders by multinational National Grid) and regulated by the state. This has not always been the case: during the 19th century, private water delivery was more common than public water delivery. However, most municipalities shifted towards public delivery of water services in the early 20th century. Most economists and historians agree that the technical and administrative simplicity of water systems, the need for a reliable water system for public health and putting out fires, and the disruptiveness of construction of water mains all contributed to the shift.

Even though Providence owns the Scituate Reservoir, it is disputed who owns the water delivery system. “There are real legal questions over who owns the water system,” State Treasurer Seth Magaziner said in an interview on The Public’s Radio last week. Magaziner believes that ratepayers from all of the municipalities where the water is delivered have an ownership stake, because they have paid for the water system's upgrades. That means that any profits made from leasing or selling the water supply would have to be returned to ratepayers. (Former Mayor Taveras also maintained this stance.)

Monetizing the system would allow the company or body that delivers water to earn a profit from ratepayers, which is not currently allowed under state law. Activists and environmental coalitions across the state have pointed to research showing that water privatization almost always increases water rates, because private companies supplying water need to raise rates to run a profit.

The Washington Post reported last year that, “although there is no reliable data to compare the service or safety records of public and private utilities, studies show that in most cases, the tab rises when for-profit companies are involved.” Public Citizen, a public interest advocacy group and think tank, has published research in opposition to water privatization, arguing that privatization leads to rate increases, undermines water quality, and decreases access to water for a state or municipality’s poorest citizens.

The threat of increased shutoffs for water customers and risks to safety posed by privatization has inspired a vocal response to the Mayor's proposal (especially after the state energy monopoly National Grid shut off the natural gas in nearly 7,000 homes on January 21, forcing people to evacuate to hotels to escape the cold). J Michael Denney, visiting political science professor at the University of Massachusetts, Boston, wrote in a letter published in the Providence Journal in December: “The goal of water supply is clean healthy water for all city residents, not closing budget gaps.” However, Providence would not be the first city to monetize its water supply in order to fund a budget gap. Other cities across the United States have done so either to fund a deficit or to make updates to crumbling water systems that the city cannot afford. However, someone still has to pay: “Water customers still foot the bill,” reported the Washington Post in the same article, because customers pay for improvements to infrastructure or budget gaps through higher rates.

However, the urgency of Providence’s unfunded pension obligations weighs heavily on Elorza. “The Providence pension system is, in my view, the biggest financial challenge that the state of Rhode Island faces,” Magaziner told The Public's Radio. Only about a third of the city’s estimated $1 billion pension obligation is currently funded: Under Rhode Island’s state standard, a pension system under 60 percent funded is in “critical condition.” However, funding pensions by monetizing the water supply puts the financial burden on those who can least afford it. When rates almost inevitably increase, the impact will be felt hardest by the lowest-income Providence Water customers, already squeezed out by other utility bills and a lack of affordable housing in the city.

Regardless of the financial problems Providence faces, many residents are unwilling to accept water privatization as a solution. In an op-ed penned for Uprise RI, Providence resident Gillian Kiley wrote, “We cannot solve decades of financial mismanagement and political pandering by putting water, critical to our health, economy and future, at risk. We cannot trust that a private entity will protect Rhode Islanders’ interests, but we know there is a market incentive to raise rates and cut management costs.” Emily Crowell, spokesperson for Mayor Elorza’s office, responded to this claim by pointing out in an email to the Independent that in 2017, water rates for Providence Water customers increased 8.5 percent (even though the system was managed publicly).

This fall, Baltimore became the first large city in the United States to vote to ban water privatization when 77 percent of voters cast ballots in support of a measure that would prevent the city from selling or leasing its water supply, in response to various proposals that the city privatize its water supply to repair its crumbling infrastructure. In 2016, the Northampton, Massachusetts city council passed an ordinance banning water privatization. In Northampton, there had not been a proposal to privatize on the table, but the ordinance was passed as a preventative measure.

Mayor Elorza maintains that he is concerned about the long-term financial health of the city. Crowell explained that the Mayor’s office has “reviewed our borrowing capacity and practices,” “pursued legislation to increase the hotel tax,” and “proposed non-profit taxation bills” to increase city revenue. In Governor Gina Raimondo’s budget announced last week, the Governor included a proposal for legislation which would allow cities to tax “non-mission essential property” owned by non-profits (such as property that maintains a revenue stream), which would allow Providence to gain property tax revenue from its universities and hospitals (which are exempt from property taxes as non-profits, but have voluntarily made small payments to the City in past years). Elorza has also pursued cost-cutting measures, including modifying health plans “for new employees in our teacher and city union contracts to generate cost savings for the city.”

However, Elorza faces opposition from city council members, mayors of neighboring towns, the State Treasurer, environmental protection organizations, and residents over his plan. For a resource as vital as water, placing its control in the hands of a private company puts residents at risk. There are, of course, other ways to fund the pensions. Rhode Island College Professor Mikaila Mariel Lemonik Arthur penned in an op-ed for Uprise RI last spring: “As a Providence resident, I would rather see those of us who can afford it pay our fair share—not for our most vital resource to be pulled out from under us.” Arthur called for higher property taxes on high-value homes as one way to fund the pensions.

Providence’s pension problem is urgent and needs to be solved, but monetizing the water supply will leave PWSB with higher rates and less accountability to the public interest. Elorza’s office and supporters of the proposal need to prepare for resistance to their proposed legislation upon arrival at the state house this spring.

JULIA ROCK B'19 swims to class.