This article is the fifth installment of a month-long series, “Through the Muck,” tackling climate change in Rhode Island. 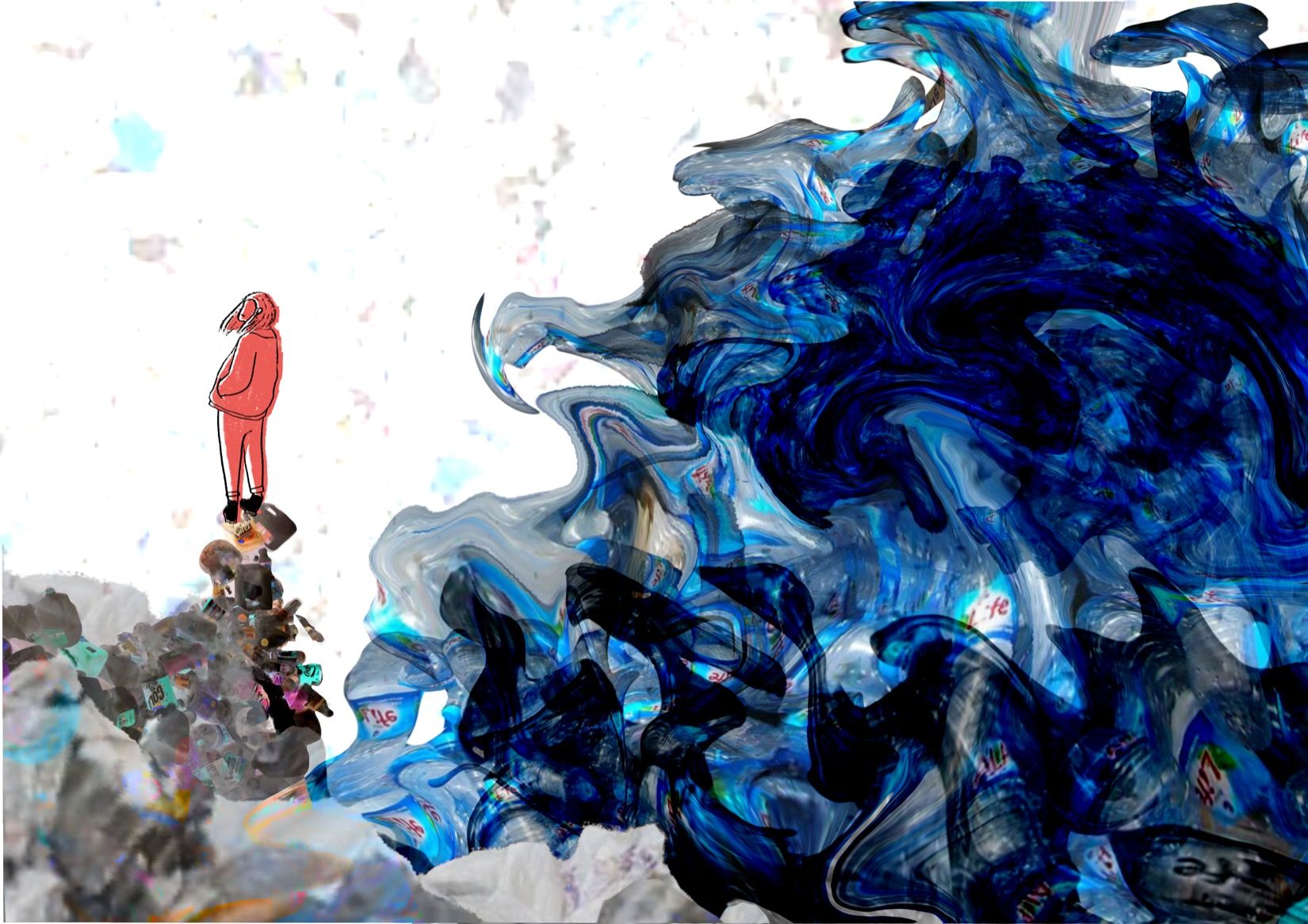 Climate change is an event: a natural disaster in progress. Of all the unsettling facts packed into the problem, the worst is that each of us individually contributes to it in some relative way. As participants in the electric, hyper–frenetic global economy that cements this impending ecological disaster, we step into the role of “harmless torturers.” In a philosophical thought experiment posed by Derek Parfit, these “harmless torturers” are anything but harmless.

The experiment goes something like this: a subject sits in an isolated chamber facing 100 observation towers. In each observation tower a random individual is asked to press a button. This single interaction delivers an inconsequentially small, electric shock to the subject. But when all 100 individuals in their respective towers press down at the same time, the combined magnitude of this unified action delivers excruciating pain to the subject.

Connect this to the problem of climate change, and it’s fairly easy to see that every day, in the name of sustaining ourselves as individuals, we press a similar button. Even if we are conscious or righteous enough to press it softly, being members of a collective global economy, we are the sole source of the problem.

If you extend the metaphor to consider who represents the “subject,” the idea is even more ethically perverse. When we really unpack who suffers from and who contributes to climate change, there is a clear inequality between the populations that produce the most carbon emissions and the populations who actually suffer from its effect.

We can clearly implicate the greater apparatus which drives us to these decisions as morally unsound. But what should we say of the individual users existing within it? How much should we hold ourselves responsible for the climate crisis?

According to Nathaniel Rich in “Losing Earth,” an in-depth history of how the international community failed to cut carbon emissions in the late 1980s, the only thing that stood between the world and avoiding ecological disaster was “ourselves.” Unlike other stories grappling with the scope and complexity of our climate crisis, “Losing Earth,” which ran in New York Times Magazine this August, is designed to absorb its audience emotionally. Rich writes a complex history of science, ecology, and politics as a character-driven plot his readers can identify with.

The article stresses its connection to the present. Paired with images of our permanently altered world—melting glaciers, flooded cities, algae-infested lakes—we see the damaged landscape of our present causally linked to the dramatic human narative unfolding on the page. This connection between past and present founds the controversial thesis of “Losing Earth,” which instead of implicating specific politicians, economic factors, and corporations, takes aim at at a transcendent human psychology that links past characters to present readers. The effect Rich wants to have is clear: he wants his audience to not repeat the short-sighted mistakes of his characters. This is the age-old task of tragedy: to absorb its audience and implicate them in a painfully affective moral lesson.

But to what extent should we take the blame—how far should we go in identifying ourselves with the tragic characters in Rich’s story? Many authors and thinkers disagree with Rich’s characterization of a universal human responsibility. Responding to “Losing Earth” days later in the Intercept, Naomi Klein made a valuable intervention, asking: how can we simply blame human nature when these monumental decisions took place over a decade known for the resolute expansion of global capitalism? Klein argues that in the year the environmental initiative failed, the United States was in the process of stringing the world together into a single, unregulated, laissez-faire market. “The Berlin Wall was about to fall,” she writes, “an event that would be successfully seized upon by right-wing ideologues in the US as proof of ‘the end of history’ and taken as license to export the Reagan-Thatcher recipe of privatization, deregulation, and austerity to every corner of the globe.”

At the present moment, America’s ability to confront global warming is blocked by the interlocking interests of the political establishment and and its corporate allies. In “Capitalism Killed our Climate Moment, Not Human Nature,” Klein attacks the American government at large for protecting the global economy. And while the ideology of deregulation and the spread of the free market may have been invented by conservatives, many Democrats have gone on to implement these ideals. Bill Clinton, succeeding H.W. Bush, signed NAFTA into effect.

As a member of the American consumer force—someone who pushes the torture button every now and then when he needs to charge his computer, or drive to the supermarket—I decided to interview Kate Schapira, a professor and environmental activist at Brown University who gives climate anxiety counseling in public spaces across New England. Unsurprisingly, my interview quickly turned into a therapy session.

Schapira: Let’s say you felt the throb that you’re talking about—of attention, and instead of it passing you lived in it. You were like, ok I’m feeling that feeling, I know that it means something; I’m going to try and live in it until it provokes me to do something.

the Indy: For me it’s very small things—it’s like—ok—what’s the most sustainable decision.

Schapira: Right, you and a lot of other people. And that is, I believe, not an accident. I think that it is useful, in the sense that it [making “sustainable” consumer decisions] keeps reminding you that you are part of a system of beings and that living systems, economic systems, all converge on you. And so, when you make a move of some sort it reverberates along the spider web, but there also is a very strong idea of individual action, success, and failure which is also isolating: that the only things that you can do are things that affect only you…. I think it has a lot to do with certain aspects of American mythology that you rise and fall on your own merits; that you are not imbedded in other systems; that your success or failure is yours alone.

Schapira’s point is that, too often, people respond to climate change in a way that isolates them. The existential crisis of climate change reveals to people a similar system to the supposedly-harmless torture apparatus Derek Parfit describes. In a sudden anxious moment of lucidity, they see how the immorality of the big picture funnels down to a micro-scale for millions of individuals. They envision a complex web of systems, networks, and economies converging on them, and suddenly invest moral significance in recycling their plastic or purchasing a hybrid car. Such individual-oriented decisions, however, reinforce the greater economic apparatus that perpetuates climate change. This is action in the face of anxiety, but it is not honest action, it isn’t the desperate and immediate response an apocalyptic future should inspire. We learn to push the harmless torture button a little lighter, but in doing so, we forget to look up from our control panels. We lose the bigger picture and fail to confront it. We do math, establish ourselves as insignificant, and once again retreat into the micro-world of individualism. In this way, to read the word “ourselves” in Rich’s thesis is dangerous. The ethical imperative climate change demands should only be thought of in terms of mass, collective action. The sooner we abandon our weight as individuals, the sooner we may begin restructuring our psychologies and the systems and networks that organize us as an unsustainable collective. In spite of this, “Losing Earth” is still a valuable piece of writing, insofar as it elicits an emotional response in its audience. The way “Losing Earth” shows its audience a more accessible history is the way in which we should  work to document the climate crisis. The fact that New York Times Magazine put forward a tragic novel disguised as history, not only reveals the controversy behind Rich’s work, but shows how desperately we need to emotionally attach ourselves to the climate crisis.

When counseling, Kate asks people to really sit with their anxiety and hopelessness. Day to day, we replace emotional reflection with meaningless individual decisions. When we sit and let ourselves sustain our despair and anxiety, we move outside ourselves and see the bigger picture. Only then can we more rationally act on our emotions, moving to confront and heal a global collective that is beyond our ego.  In the history of storytelling, catharsis has always served to do just this, and for that reason we need more tragic history. We need more articles like “Losing Earth.”

MILES GUGGENHEIM B’20 buries his climate angst at the bottom of a clearly marked bin.