WHY AM I LONELY FOR LONESOME LOVE?

Emotion and spectacle in Mitski’s Be the Cowboy 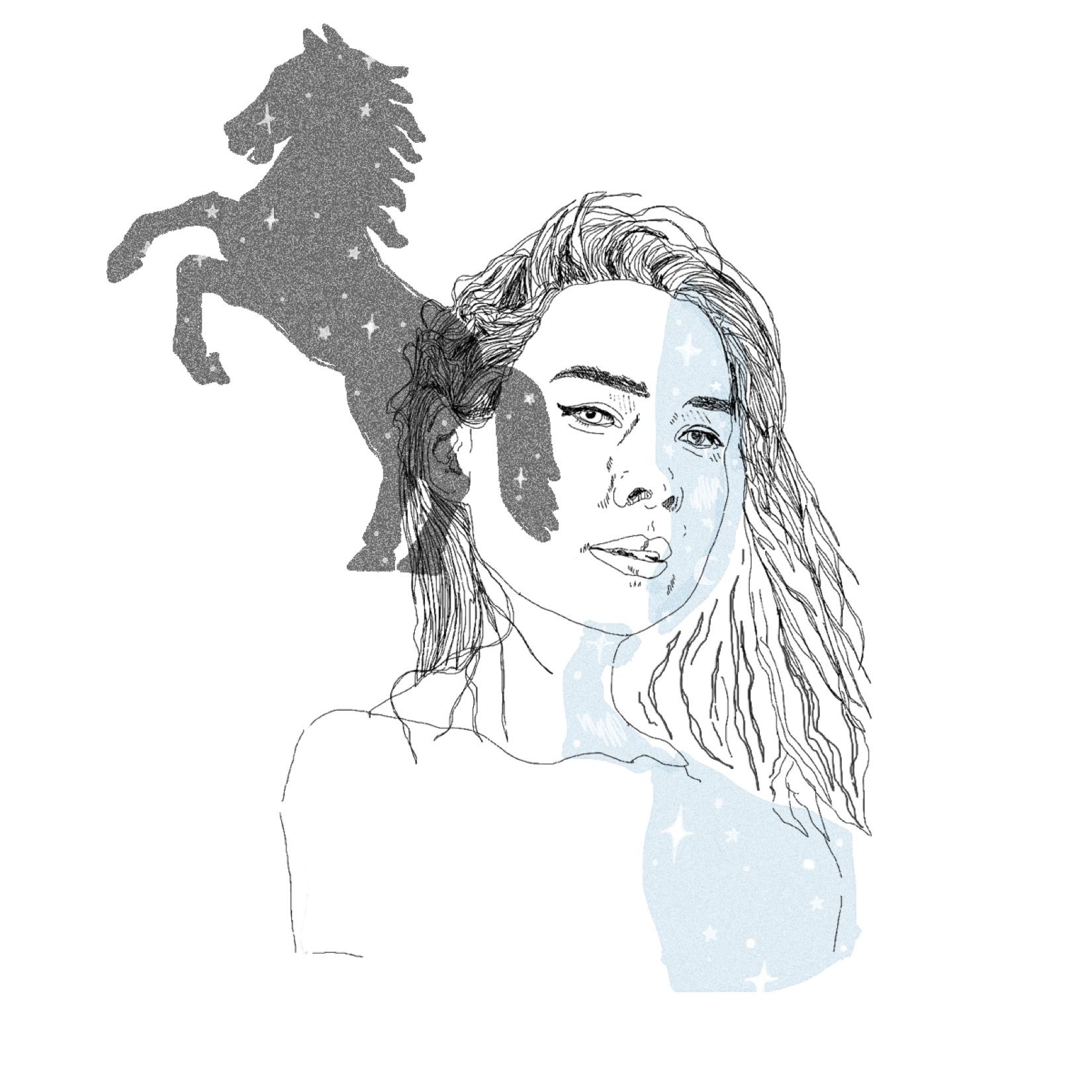 I remember a particular moment from my first night on Brown's campus this September when my entire body was enveloped by a state of pure panic. I didn’t move. I didn’t make a sound. I just felt the laughably simple emotion of helplessness reducing me to a state of overly-alert nothingness. Not a single person in this town cared for me, and the expanse of my loneliness and fear became a darkness that manifested in my dreams while somehow spilling over into my reality. In the dizzying heat of the late summer, I found myself maneuvering through a vat of isolation unlike one I had ever experienced before with the clinging optimism that the pain would pass, or perhaps even morph into self-reflective growth. So what did I do? I opened a window and put on Mitski Miyawaki’s new album, one that dips into every facet of the human vulnerability that emerges from isolation, yearning, and fear of deficiency.

Be the Cowboy, Mitski’s fifth studio album, challenges us to revise our thoughts about ‘sad music.’ Music that bemoans and laughs at the woes that come with having an unrequited crush doesn’t have to be juvenile. In the song “Nobody,” Mitski croons about her lonesomeness, while dragging the listener through disco-esque waves of irresistibly fun musical flourish. Superimposed onto an intensely upbeat backdrop, she cries “Nobody, nobody, nobody” in a pattern that mirrors a feverish breakdown she herself experienced when she found herself in a state of complete isolation from human contact. As Mitski told music website Genius, “I am too proud to be hysterical to other people but the chorus ‘Nobody’ was literally me in a semi-fugue state on my hands and knees on the floor just crying and just repeating the word, ‘nobody,’ and then I don’t know. I was like, ‘Let me use this pain and exploit it for my money.'” It’s her ability to transform raw emotion into spectacle that charms us into welcoming our own vulnerabilities. In lines like “Cause nobody butters me up like you/And nobody fucks me like me,” from “Lonesome Love,” Mitski showcases self-conscious, navel-gazey lyrics that carry the capacity for comedic self-deprecation —lock, stock, and barrel.

Mitski’s Be the Cowboy exposes the grotesquely romantic qualities of loneliness and imperfection. Unlike Mitski’s previous albums, such as Bury Me at Makeout Creek, which created a violent orchestra of distorted sound, Be the Cowboy has a sonic clarity that allows for her voice to shudder and crack with a genuineness that reaches out and implicates the listener as a witness to her woe. Upon playing the album, we adopt the role of active participants in Mitski’s own lamentation; her desires for human contact and validation become just as much ours as they are hers. Every track employs an almost jarring lyrical literalism (her lyrics read almost as a diary entry), making the listening experience all the more intimate, while paradoxically providing a sense of haziness (created by her use of haunting sound elements) that only makes the distinction between Mistki’s art and reality all the foggier. Mitksi’s vulnerability is empowering; she allows us to see the depths of her self-destructive emotions, and allows us to move on. By turning her emotion into a spectacle for coping, Mitski enables us to recognize our own anguish, laugh at it, and overcome. This is how we become the cowboy.

Be the Cowboy wouldn’t exist without loss, and Mitski’s own elevation of music over her emotions. The first track, “Geyser,” opens with a haunting cascade of organ pipes, over which Mitski’s pleading voice seems to call from a distance, like the life you’ve surely left behind. “You’re my number one/ You’re the one I want,” she chants eerily as the sonic space begins to glitch and morph. Instead of decoding this complex imagery, however, Mitski revels in its ambiguity: “I think this is one of my vaguest songs,” she said. “Usually my songs have a narrative of some sort. But this song is all feeling.” The choice to begin the album with “Geyser,” in all of its haziness, is a direct commentary on the cohesiveness of the album as a whole—a statement of its artistic merit as a work that required significant loss in its very existence. Brilliantly echoing its own title, the song begins to ramp up, finally bursting into a frenzied declaration, “Though I’m a geyser/ Bubbling from below/ Hear it call, hear it call/ Hear it call to me.” This vivid image of the geyser emanating frames Mitski as an almost divine source of creative energy. But for Mitski, her creative process not only gives her energy but depletes her. She nods to the sacrifice required by her career, but chooses to continue, as she “can’t imagine doing anything else.”

Explorations of love, loss, and loneliness can be trite, but Mitski turns the idea of emotion on its head by reconciling the all-too-familiar confines of solitude and the humor to be found within frantic desperation. In “Me and My Husband,” Mitski fleetingly imagines a stable life, symbolized by a heteronormative marriage, while also mocking this desire. “But me and my husband/ We are doing better,” she affirms, “It’s always been just him and me together.” In the obvious naivete of the song, Mitski underscores a pitiful voice with imagery of 50s Americana. The listener can imagine Mitski as just another Stepford wife, baking a pie to the sing-song echo of “Honey, I’m home!” Creating this character of the ideal husband, poking fun at the institution of marriage, Mitski sings

“And I’m the idiot with the painted face/ In the corner, taking up space/ But when he walks in, I am loved, I am loved.”

There is no husband, and even if there was, there wouldn’t be any love; Mitski’s enunciation of the word “love” cracks, becomes desperate. Through the supposed hilarity, and an upbeat sonic background, she tempts us to indulge in the delicious coupling of comedy and tragedy.

By the end of the album, Mitski beckons us to look back on lost pasts while simultaneously pushing us to accept the growth that comes with inevitable change. In “Old Friend,” Mitksi welcomes the twinge of nostalgia that comes with the revisiting of paths untaken, begging, “Meet me at Blue Diner/ I’ll take anything you want to give me, baby.” While “Old Friend” invites us to sit in a diner booth with Mitski and fall into an unending wistfulness, “Two Slow Dancers” asks us to push past this nostalgia, filling us with the realization that we must move forward. “It would be a hundred times easier/ If we were young again/ But as it is/ And it is/ To think that we could stay the same,” Mitski sings, bringing about bitter yet profound acceptance of helplessness to the passage of time. We can never remain stagnant, and, in Mitski’s words, we all “have to go home and go back to [our] lives.”

Mitski’s portrayal of insecurity, vulnerability, and desolation are haunting because they are so painfully familiar. However, we must be careful in watering down the value of Be the Cowboy to a collection of “depression anthems.” Save your tears. “Yes, it’s personal,” Mitski said to Pitchfork, “But that’s so gendered. There’s no feeling of, ‘Oh, maybe she’s a songwriter and she wrote this as a piece of art.” Although it’s true that the achingly lovelorn tracks on the album expose her unraveling, spiraling emotions, Mitski’s overarching reclamation of vulnerability is nothing but empowering. She nods to the validity of fully feeling the depths of self-destructive emotions, and openly uses those same emotions as a tool to create something even deeper.

Mitski revels in the unashamed evocation of the types of feelings we oftentimes bury, allowing for an even greater overcoming. When prompted about the album’s title, Mitski stated that it draws from her admiration for an “artist [she] really loved who used to have such a cowboy swagger.” She reflected on this admiration, and reckoned, “I could just be my own cowboy.” Hank Williams, a famous cowboy, once wistfully and sorrowfully crooned, “I’m so lonely I could cry.” Mitski challenges the iconic man of “Lovesick Blues” in a bullfight of emotions, not in a gendered ‘who’s more cowboy’-ness, but rather to actually feel, to cry. She lassos us off the edge of feeling, to in fact feel deeply and completely.