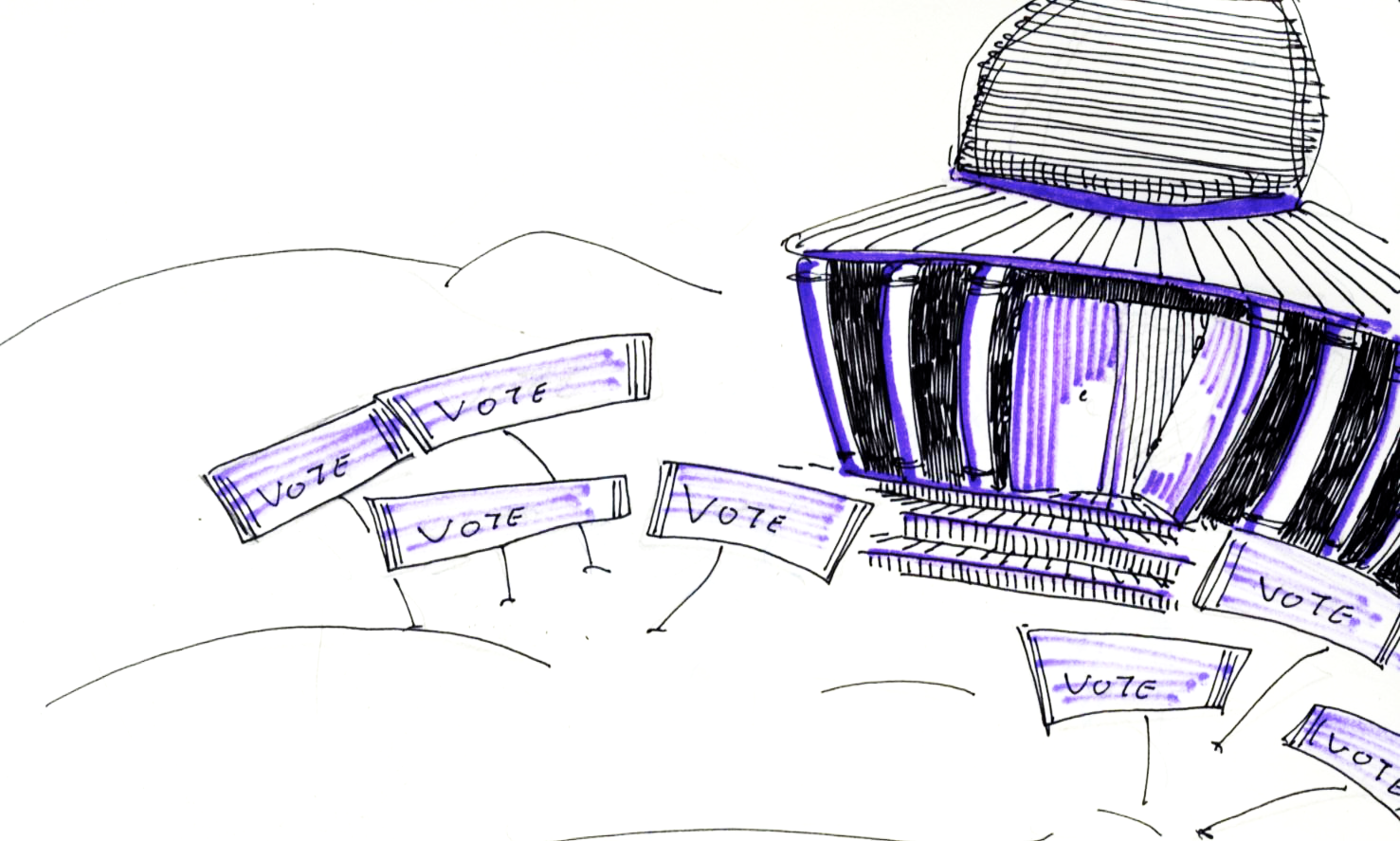 Here we thread together national stories, revealed not through House or Senate races, but  through ballot measures and referendums, speaking to the battles being fought nationwide over criminal justice reform, voting rights, and reproductive justice.

There is not one criminal justice system in the United States, but many state and local level institutions and policies that, moving together over the past half-century, have built the largest carceral state in the world. On Tuesday, activists and advocates continued the fight to dismantle mass incarceration in their states and communities.

In Florida, voters passed Amendment 4, restoring voting rights to 1.4 million Floridians convicted as felons and disenfranchised, even after they completed their sentences, by the state’s constitution. According to data from the Sentencing Project, in 2016 about 9.2 percent of the voting-age population could not vote, including 17.9 percent of African Americans. Amendment 4 still excludes those convicted of murder or felony sex offenses. Only two other states, Kentucky and Iowa, still bar felons from voting after serving their sentences. On the flip side, only two states (Maine and Vermont) let people vote from prison.

In Colorado, Amendment A removed 142-year-old language from the state constitution allowing prison labor without pay. Colorado’s constitution previously contained a version of the text of the 13th Amendment to the US constitution banning chattel slavery “except as a punishment for a crime whereof the party shall have been duly convicted.” Jumoke Emery, a lead organizer with Abolish Slavery Colorado, reported on Monday that flyers for Amendment A were burned on his front porch. “It’s the equivalent of an 1820s cross burning in my front lawn,” he told the Denver Post. Amendment A echoes the demands of incarcerated workers in this year’s nationwide prison strike. Hourly wages for prison labor remain under $1 an hour in Colorado and many other states, according to the Prison Policy Initiative.

Across the nation at the local level, criminal legal reformers focused their energies on district attorneys, who have been singled out as key drivers of mass incarceration. Progressive DAs ran this election cycle on a platform of rejecting prosecutorial dogma—a culture of tough-on-crime sentencing—to deconstruct the machinery of the carceral state from the inside. Wesley Bell became the first Black prosecutor of St. Louis County after unseating Robert McCulloh, known for failing to prosecute the police officer who killed Michael Brown in Ferguson in 2014. Bell promises to never seek the death penalty, eliminate cash bail, and oppose new mandatory minimums. Activist-journalist Shaun King’s Real Justice PAC endorsed Bell and a slew of other candidates. In Boston, Rachael Rollins became the first black woman DA of Suffolk County by pushing to not prosecute low-level nonviolent crimes. In Texas, Joe Gonzales (San Antonio) and John Creuzot (Dallas) also joined the small, but growing ranks of reformer prosecutors nationwide working to remake the institution they represent.

The struggle to derail reproductive justice will always play out on a state level. The right to abortion and reproductive health care access have been issues at the heart of political battles all year, and deeply influenced Tuesday’s midterms. Judge Kavanaugh’s confirmation unearthed grave concerns over the future of Roe v. Wade, stoked by his anti-woman voting record and President Trump’s insistence on nominating a pro-life champion. To vote for Kavanaugh, in many voter’s minds, was to threaten the right to abortion. It came as no surprise then, that reproductive justice was at the center of some of the hardest fought races in conservative America. Throughout the campaign season, Democrats like Missouri’s Senator McCaskill and North Dakota’s Senator Heitkamp were targeted repeatedly and aggressively by their opponents for their support of late-term abortion, even as they tried to remain mum on the subject entirely. At the end of the night, both women were defeated by staunch pro-life Republicans. Though most of the attention on reproductive rights this Tuesday was focused on specific candidates like McCaskill and Heitkamp, abortion also found its way onto state level ballots, producing immediate consequences that most overlooked entirely.

Since 2017, state legislatures all over the country have passed over 60 distinct anti-abortion measures, restricting access to funding, shutting down clinics, or imposing term limits on the procedure. State level policies have always been the tool with which Roe v. Wade opponents could still make headway, and the policies always hurt low-income women first and worst. This year, three states had explicit abortion measures on the ballots. Oregon, West Virginia and Alabama asked voters to choose sides on constitutional amendments and funding restrictions, initiatives that ranged from largely symbolic to immediately consequential.

Alabama saw the proposal of an amendment to the constitution that would end all abortion access. Amendment 2 would “recognize and support the sanctity of unborn life and the rights of unborn children, including the right to life.” It was largely intended to act as a trigger law, waiting dormant until the moment the Supreme Court might decide to overturn Roe v. Wade. If they did, the amendment could make abortion illegal in the state the moment it was overturned. With 59 percent, Alabama voted in favor of this amendment.

In West Virginia, if a person on Medicaid wanted an abortion procedure, Amendment 1 would force them to pay. The ballot initiative, titled the No Right to Abortion in Constitution Measure, proposed restrictions on taxpayer dollars to Medicaid-funded abortions. The Amendment reads, “Nothing in this Constitution secures of protects a right to abortion or requires the funding of abortion.” West Virginians voted in favor of this amendment as well, passing it with 52 percent.

In Oregon, abortion rights saw one significant victory when voters struck down Measure 106, which would have walked back some of the most comprehensive pro-choice legislation in the country. In 2017, Governor Kate Brown signed the Reproductive Health Equity Act, making abortion, contraception, and all other reproductive health care free for Oregon residents. When this passed last year, Oregon became the 17th state to allow state money to go to abortion procedures. Measure 106 would have weakened this, restricting public funds for abortion. This was the first ballot initiative related to abortion brought to Oregonians for over the decade, the last one shot down in 2006. On Tuesday, 66 percent of voters said no to Measure 106.

Voter suppression was a crucial issue in this midterm, as in many of the elections that have preceded it. Republican-driven measures have included voter ID laws in North Dakota that increasingly excluded Native Americans from exercising their right to vote. In Georgia, voter suppression at the hands of Republican gubernatorial candidate (and Secretary of State) Brian Kemp might have severely impacted the election—which remains contested—as polling stations in predominantly-Black Randolf County were closed in August, and 53,000 voter registrations were put on hold earlier this month.

This was part of a larger trend since the 2010 election. From that point, according to the Brennan Center for Justice, 24 states have put stricter voter regulations in place, including cutting back on early voting, more restrictive voter ID laws, and making it harder for citizens to register, among others. The obstruction of voter rights is part of a much greater, shameful history of racialized disenfranchisement.

In the upside, the midterm results have also expanded voting rights in the states of Michigan, Maryland, Colorado, Nevada, Florida and Missouri through different measures. In Nevada, question 5 was passed with a 60 percent of the vote, allowing for Automatic Voter Registration at the DMV. In Michigan, Proposal 3 added eight voting policies to the Michigan Constitution, including straight-ticket voting, automatic voter registration, same-day voter registration, and no-excuse absentee voting. While other policies included in the proposal were effectively in place, its approval added the security of a constitutional guarantee for the expansion of voting access in the state. In Maryland, measure 3, seeking to allow individuals to register at a polling place on election day, was approved by 67 percent. In the words of Political Science professor Juliet Hooker during a recent Midterm panel at Brown University, “this shows how intentions to impose minoritarian rule can be fought at the state level.”

Finally, in the name of karmic justice, conservative Kris Kobach lost the race for governor of Kansas to progressive Laura Kelly. Kobach has been at the forefront of Republican efforts to restrict voter rights, when he sought to require, in addition to photo-IDs, for people to prove their citizenship when registering to vote. Kelly defeated him last night with 47.8 pecent of the vote. And for that, we celebrate.