Life and Death in Nebraska 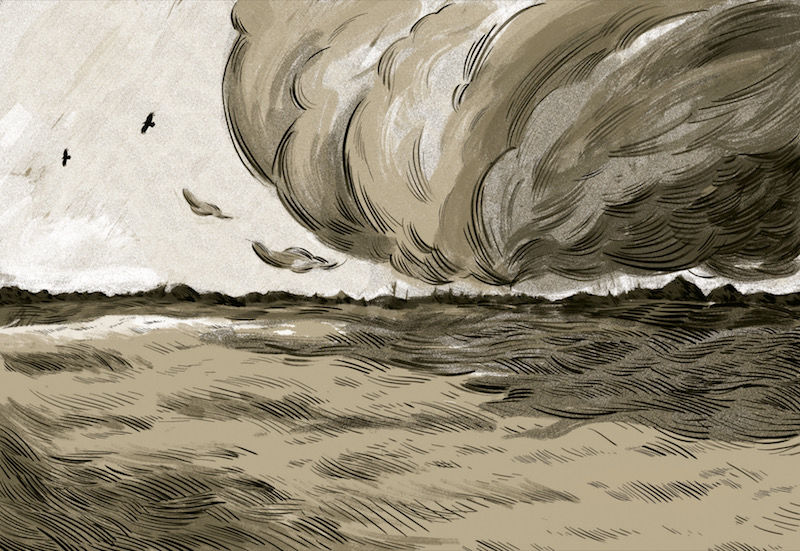 On the night of September 1, 1994, local news anchors Loretta Caroll and John Mason reported live from the Nebraska State Penitentiary. The execution of death row inmate Harold Lamont Otey was imminent. Vowing his innocence, Otey had spent much of his time on death row appealing and re-appealing his death sentence. With all judicial reviews exhausted, and barring a last-minute pardon from Governor Ben Nelson, Otey was scheduled for execution at midnight.

Never before in Nebraskan history had a death row inmate faced execution via the electric chair. The controversy drew the attention of both pro-death penalty and anti-death penalty activists. Thousands of people gathered outside the prison walls. State patrol officers were forced to erect a double fence to separate the rival factions. Deb Ward, reporting from within the crowd, caught a shouting match between a protester and a supporter:

Protester: “None of you are about productivity. You’re all about killing others. You think killing is going to solve everything. You kill Otey, crime goes down. Well it doesn’t.”

Supporter: “Why don’t you sit on his lap?”

Protester: “Why? You want me dead too. That’s wonderful. This gentleman over here wants me to die for saying something. That’s absolutely wonderful.”

At 12:01AM, four 2,400-volt jolts of electricity surged through Harold Lamont Otey. He was pronounced dead at 12:33AM. To supporters and opponents of the death penalty alike, the execution of Harold Lamont Otey set a defining precedent: Nebraska state officials would go to any length to apply whatever punishment the courts decided.

A similar controversy followed when, six month ago, the Nebraska Department of Correctional Services scheduled Carey Dean Moore's execution for this past August 2018. Like Otey, Carey Dean Moore was scheduled to be executed via a controversial method. Never before in the United States, let alone in Nebraska, had a prisoner faced a death penalty utilizing fentanyl as the primary drug in the lethal injection. Nearly forty times more potent than heroin, fentanyl has been directly linked to thousands of overdoses in the national epidemic of prescription opiate abuse. Fentanyl-related overdose deaths have increased by nearly 600 percent from 2014 to 2016 in 24 of the United States’ largest cities. As a result, the festering tension between death penalty and anti-death penalty activists erupted into a war: lawsuits by the ACLU, dissent by Pope Francis, campaigns by the Nebraska Catholic Church, legal action by pharmaceutical companies, and ads by Americans for Prosperity all descended upon Nebraska. The entire state was seized in a gridlock. Despite the unparalleled amount of opposition, Moore died via lethal injection the morning of August 14, 2018.

There is powerful internal strife over the issue of the modern death penalty in Nebraska, a force which seems to tear at the state’s seams whenever news of the death penalty’s application arrives. Moore’s execution exposes the clash of two traditions of justice in Nebraska that, when linked with state officials’ committed pursuit of the death penalty, produces an unceasing tumult of matters of life and death in middle America.

The two disagreeing attitudes about the death penalty align with two opposing ideologies: vigilante justice  and due process. Vigilante justice is defined by extrajudicial actions often taken under the auspice of ‘protecting local communities,’ while due process is defined by judicial caution in order to insulate the rights of citizens from displays of excessive governmental power. Broadly speaking, the vigilante is more likely to support the death penalty, perceiving it to be a powerful tool of protection against dangerous criminals. The due process advocate is more likely to oppose the death penalty, seeing it as an abuse of power.

American vigilante justice has roots in the practice of lynching. In The Contradictions of American Capital Punishment, legal scholar Franklin Zimring used data from the Tuskegee Institute to identify 14 states with historically high rates of lynchings. The vast majority of these states were located in the sparsely populated Southern United States, with a few scattered in the American Midwest. Using modern execution statistics, Zimring found these states, while collectively comprising only 35 percent of the population, accounted for 85 percent of the first 695 executions after 1976.

The American due process system has descended from the anti-authoritarian principles upon which the nation was founded. The judicial traditions of high burdens of proof and presumptions of innocence, enshrined in law, spread to areas of high urban development in the densely-populated Northeastern and Western states. Zimring found this group of states only accounted for three percent of the first 695 executions after 1976.

Vigilante justice, in the form of lynching, was utilized by early Nebraskans to purportedly ‘protect property’ and ‘discourage theft.’ Racial animus, enflamed by false and grossly exaggerated news reports, motivated a significant percentage of these lynchings. While never exceeding one percent of the population, African Americans represent eight percent of the total amount of deaths in these early lynchings.

Instances of lynching in Nebraska fell significantly towards the beginning of the 20th century. Lynching met its end as the police extended their reach into smaller towns and the recently-expanded court system took over cases of capital punishment. Nearly 60 people were lynched in Nebraska between 1858 and 1919, while 24 were executed according to due process.

Nebraska, uniquely positioned between Southern and Western states, is the nexus in the clash between the vigilante and due process system. Nebraska ranks 23rd out of states with the highest lynching rates. The racism of lynching carries over into the modern death penalty: African-Americans account for 4 percent of Nebraska’s population, while they account for 25 percent percent of prisoners currently sentenced for execution. In addition to correlating historical rates of lynching with the death penalty, Zimring points to statistics showing correlations between historically high-lynching states and modern states with lax gun policies, high rates of self-defense killing, punitive prison sentences, and open-carry firearm laws; Nebraska qualifies in almost every category. Accordingly, the state has moderately greater support for vigilante values than due process values.

As Nebraska state officials began to ‘modernize’ their death penalty protocols, they revived rhetoric of the vigilante tradition by emphasizing capital punishment’s supposed ability to provide ‘closure’ to the family of the victim. In the mid-1980s, the addition of the victim impact statement into the courts transformed death penalty proceedings. The prosecution became free to use the evidence of the suffering of the victims’ families to advocate for the death penalty’s use. The vigilante argument that the criminal’s death would provide closure to the victim’s family became increasingly popular. Prior to 1993, only one news story combined the term “closure” with “death penalty.” By 2001, 500 news stories had used the terms “closure” and “death penalty” together.

Despite the prevelance of vigilante justice ideology in Nebraska, the state’s high levels of Catholicism and dense pockets of liberals in its largest cities have evened the ground in the death penalty battle. Consequently, no resolution to the conflict is likely without a significant reduction of power in one of the two value systems. The stakes are high. Delays in executions by death penalty opponents are now framed as deferred justice for the victims, while the intrusion of punitive vigilante justice in the court system has galvanized anti-death penalty advocates. However, the execution of Carey Dean Moore increased complications for both sides of the issue.

State officials have shown eagerness to carry out execution protocol regardless of potential danger. Carey Dean Moore’s death made Nebraska the first state to use fentanyl in an execution. Fentanyl’s unprecedented use and its potential to cause immense pain when mixed with other substances drew accusations that Nebraska was engaging in cruel and unusual punishment. However, standard methods of execution, even without the addition of fentanyl, risk causing acute and needless suffering. Seven percent of all executions via lethal injection have been botched. The College Hill Independent spoke with Eric Berger, a professor who studies the death penalty at the University of Nebraska College of Law, about the dangers of lethal injection protocol and Nebraska’s use of fentanyl in its most recent execution.

Unfortunately, this is not an abstract possibility, as botched lethal injections occur with alarming frequency in the United States. The most infamous case happened in 2014, with the execution of Clayton D. Lockett, in Oaklahoma. The potassium chloride was mistakenly administered before the anesthetic rendered him unconscious. After the potassium chloride was injected, witnesses saw Lockett writhing in pain on the gurney, dying nearly thirty minutes after the injection.

“The states have been under siege,” Berger went on to say. “In recent years, drug companies have made it harder for states to get the drugs that they need for the lethal injection protocols.”

The pharmaceutical companies that produce these drugs take immediate legal action against their use in an execution. For the companies, often located in places such as Canada and Europe that have banned the use of capital punishment, affiliation with the death penalty would be a public relations scandal. Nebraska has incurred countless and expensive lawsuits from pharmaceutical companies overseas. As a result, state officials have lost access to crucial drugs needed in the injection protocol. Nebraska turned to fentanyl as a last resort.

When asked whether Nebraska would continue using fentanyl, Berger replied “My guess is Nebraska’s decision on that will be driven by whether or not they can get another drug. But, if not, I think it would stick with the fentanyl, because to change the protocol it has to have another administrative procedure and redraw the entire protocol.”

As states lose their access to lethal injection drugs, they turn to dangerous and untested methods to carry out death sentences. Oklahoma recently announced that it plans to employ nitrogen gas in its executions, while Ohio switched to using large doses of pentobarbital. Mississippi and Alabama have also recently signed into law injection protocols that use untested drugs. Little concern has been displayed by state officials for the potential suffering these drugs may cause.

“A lot of states,” Berger concluded “probably including Nebraska, without more information I can’t be sure, are throwing together execution protocols... without a lot of care for whether they would cause suffering and without expertise on how to do it safely. These protocols raise serious humanitarian and constitutional problems.”

JULIAN FOX B'20 thinks there are no appropriate drugs for lethal injection.