The Urban Landscape Re-imagined in Wood 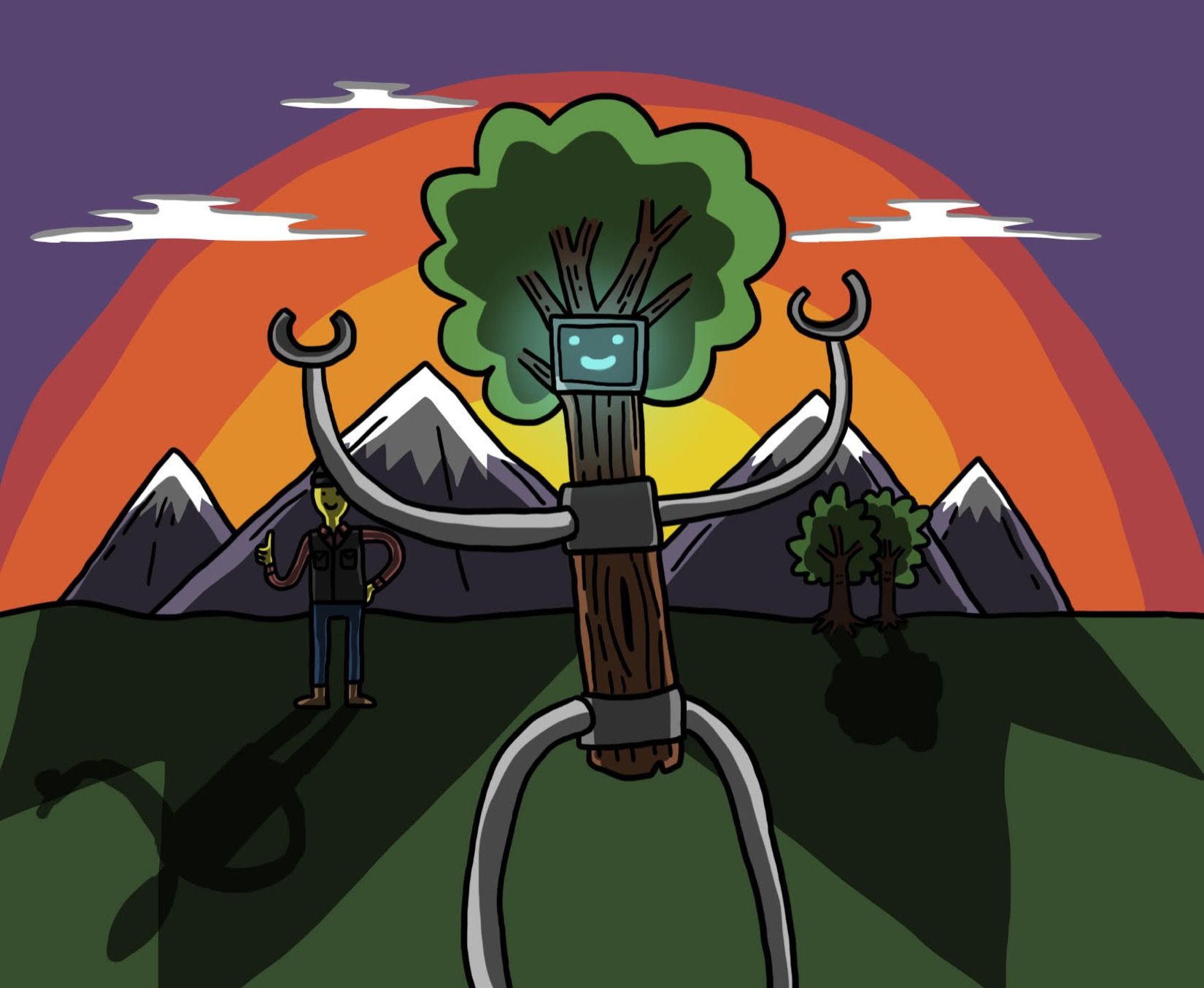 It is a rare and special occasion when a truly novel building material is made widely available for commercial use. The last time this occurred was at the turn of the twentieth century, when large-scale steel and concrete manufacturing revolutionized the global building industry. Now, a century later, architects and engineers are finding a renewed interest in one of our most ancient building materials: wood.

At the microscopic level, wood resembles a dense network of straws held together within an organic matrix. When a force is applied perpendicular to the direction, or grain, of these straws, they come apart much like the end of a paintbrush or a bundle of hay might. If a force is applied parallel to the grain, all the straws work in tandem to resist snapping along their longer axis. For millennia, this was the basic rule of building with wood: structural load must always be applied parallel to the grain.

This ostensibly simple rule contains within it a host of conditions that have historically limited the use of wood in modern buildings. As wood is only capable of withstanding load along the axis in which it grows, the maximum dimensions of wooden structural elements have been restricted to the size of the largest trees; a wooden column could only ever be as tall as the tree from which it was harvested, and wooden beams only as deep as a tree’s diameter. This limitation is further complicated by natural variations in the quality of wood. The occurrence of knots, the age of the tree, and its rate of growth all drastically increase or diminish the strength of the lumber produced from it. The relative lack of control that architects and engineers have over the material made it unsuitable for use in buildings taller than a few stories.

However, recent breakthroughs in synthetic resin technology have enabled engineers to overcome these natural limitations. It is now possible to fabricate wooden structural elements whose size and strength are comparable to those made of steel and concrete. This man-made wood, commonly called engineered lumber, consists of pieces of dimensioned lumber glued together in configurations designed to maximize the structural qualities of wood. Wooden beams and columns once hewn from forest giants can now be made from many small pieces of lumber, while walls and floor slabs can be made to resist multi-directional loads by cross-layering panels of wood perpendicular to one another. These large engineered lumber products, collectively called mass timber, dramatically increase both the strength and efficiency of wood construction and signal the possibility of building with wood at an unprecedented scale.

Mass timber has also become the model material for architects and engineers concerned with developing more environmentally sustainable building practices. Building construction and energy use account for more than a third of global energy consumption and nearly a quarter of global greenhouse gas (GHG) emissions. As urban populations around the world are projected to reach a staggering 6.4 billion residents by 2050 and the global building surface area is set to double, proponents of mass timber construction point to wood’s ability to sequester carbon as a means of offsetting the GHG normally emitted during the manufacturing, transportation, and assembly of construction materials. Growing trees absorb carbon dioxide from the atmosphere, and once the wood is harvested and used in construction, the carbon absorbed over the tree’s lifetime is locked away and isolated from the atmosphere.

The difference in total GHG emissions between mass timber construction and conventional steel and concrete construction is difficult to quantify, but the growing consensus is that there are real environmental benefits to substituting steel and concrete with mass timber. A 2007 study funded by the US Forest Service concluded that “net GHG emissions associated with wood-based houses were 20–50 percent lower than those associated with thermally comparable houses employing steelor concrete-based building systems.” This is supported by a 2017 study conducted by researchers at the University of Bath and Harbin Institute of Technology comparing the energy efficiency of four-to-seventeen-story residential buildings made from reinforced concrete (RC) and cross-laminated timber (CLT). The study estimated that net energy consumption and net carbon emissions were between 9.9 and 13.2 percent lower when using CLT as opposed to RC.

It is clear that the AISC and NRMCA’s resistance to market competition colors much of their criticism of mass timber construction, particularly mass timber’s ability to withstand fire. The attacks are often comically reductive. Two weeks ago, the advocacy arm of the NRMCA, Build With Strength, released a video of workers attempting to burn a block of concrete with a blowtorch to demonstrate the material’s resistance to heat. The AISC, on the other hand, summarizes their criticism of mass timber in this way: “Wood burns, even though the wood industry and the Department of Agriculture want you to believe it only ‘chars.’” Though technically true, the AISC neglects to mention that charring is the very process that enables mass timber to resist fire. After initial combustion, the charred exterior of thick engineered lumber products insulates and protects the unburnt wood within. In fact, untreated mass timber performs measurably better in two-hour fire tests than untreated steel, which quickly loses its rigidity when exposed to high temperatures.

The steel and concrete industry’s skepticism of the environmental benefits of mass timber is substantially more difficult to dismiss. Chief among the criticisms is the mass timber industry’s assumption that all trees felled for the manufacturing of engineered lumber products are sustainably harvested. Without this essential precondition, the effects of deforestation negate any short-term reduction in GHG emissions by undermining the potential for forests to absorb carbon dioxide in the future. While more effective forest management policies have begun to reverse deforestation in the US, only a one percent increase in total forested land was recorded between 2007 and 2011, and the effects of climate change threaten even this small achievement. Wildfires, rapidly changing ecologies, disease, and outbreaks of parasitic insects kill millions of hectares of forests each year, and though the wood industry often harvests dead trees in order to sequester their carbon before it is released through decomposition, deforestation continues to be a serious concern.

Calculating the benefits of carbon sequestration is further complicated by what is perhaps the most basic criticism of the building industry as a whole: the environmental impact of demolishing old buildings and erecting new ones far outweighs even the most sustainable techniques. The amount of energy expended and the volume of GHG emitted during demolition, in addition to the release of any carbon previously sequestered by now discarded lumber, handily tip the scales against the sheer volume of carbon sequestered by new mass timber construction. Though it should be reiterated that steel and concrete construction, which are more energy-intensive and GHG-emissive, do not have the added benefit of carbon sequestration, we should keep in mind that the greenest building is still the one that is never built.

Large engineered lumber products dramatically increase the strength and efficiency of wood construction and signal the possibility of building with wood at an unprecedented scale.

While the competing industries are locked in a debate over their respective environmental impacts, mass timber advocates are steadily gaining ground in the US by means of a separate line of argument: economic incentive. Mass timber construction advocacy groups such as ThinkWood, the American Wood Council, and the Binational Softwood Lumber Council have made the potential for job creation in the American and Canadian economies a major component of their arguments for increased investment in mass timber construction. Citing a study from the USDA, ThinkWood has argued that sustainable logging practices will provide a stable source of employment for rural communities in the decades to come and that engineered lumber production will make up a substantial portion of the projected five percent growth for employment opportunities in renewable natural resource industries between 2015 and 2020.

Other agencies are not so optimistic. While the Bureau of Labor Statistics projects a modest growth of 7.2 percent in jobs related to forest management between 2016 and 2026, it expects the logging sector to contract by 21.4 percent. Veneer, plywood, and engineered wood product manufacturing are expected to remain relatively stable, with a net job loss of 0.4 percent, but the Department of Labor does not seem to share the wood industry’s expectations for reliable growth in jobs related to mass timber production. Nonetheless, the wood industry has enjoyed a series of decisive victories in the arenas of domestic and international policy since 2015. In spite of the steel and concrete industry’s protests, the International Code Council (ICC) added engineered lumber products to the IBC in 2015, and is expected to further standardize them in 2018 upon the acceptance of code change proposal G108-18. The proposed code change would update previous definitions of Type IV (heavy timber) construction to include engineered wood products, and would create three new subcategories specifically for mass timber construction.

While trade groups are focused on defending their market shares from one another, engineers and material scientists are finding new and clever ways of building with mass timber, steel, and concrete.

In late June of 2018, a bipartisan coalition in the House of Representatives narrowly passed the Agricultural and Nutrition Act of 2018, which includes the research section of the Timber Innovation Act of 2017. The Senate, meanwhile, has placed its own version of the farm bill, the Agricultural Improvement Act of 2018, on the legislative calendar, and is set to debate it later this year. If passed, the Senate’s bill would secure further grant funding for research into mass timber construction.

While trade groups are focused on defending their market shares from one another, engineers and material scientists are finding new and clever ways of building with mass timber, steel, and concrete. In fact, the steel and concrete industries may actually stand to benefit from further investment in mass timber construction. Research into cutting-edge hybrid construction techniques utilizing all three major building materials in complementary configurations could secure a market share for each industry. The John W. Olver Design Building at the University of Massachusetts Amherst has been celebrated by the wood industry as the first academic building in the United States incorporating mass timber construction, but the most innovative aspects of its structural system are the wood-steel hybrid truss supporting the green roof and its wood-concrete composite floor slabs. Engineers at the University’s Building and Construction Technology department, whose research provided the basis for the wood-concrete composite deployed in the building, argue that the appropriate use of a wide range of materials allows for flexible construction methods and generally higher material strength and stiffness.