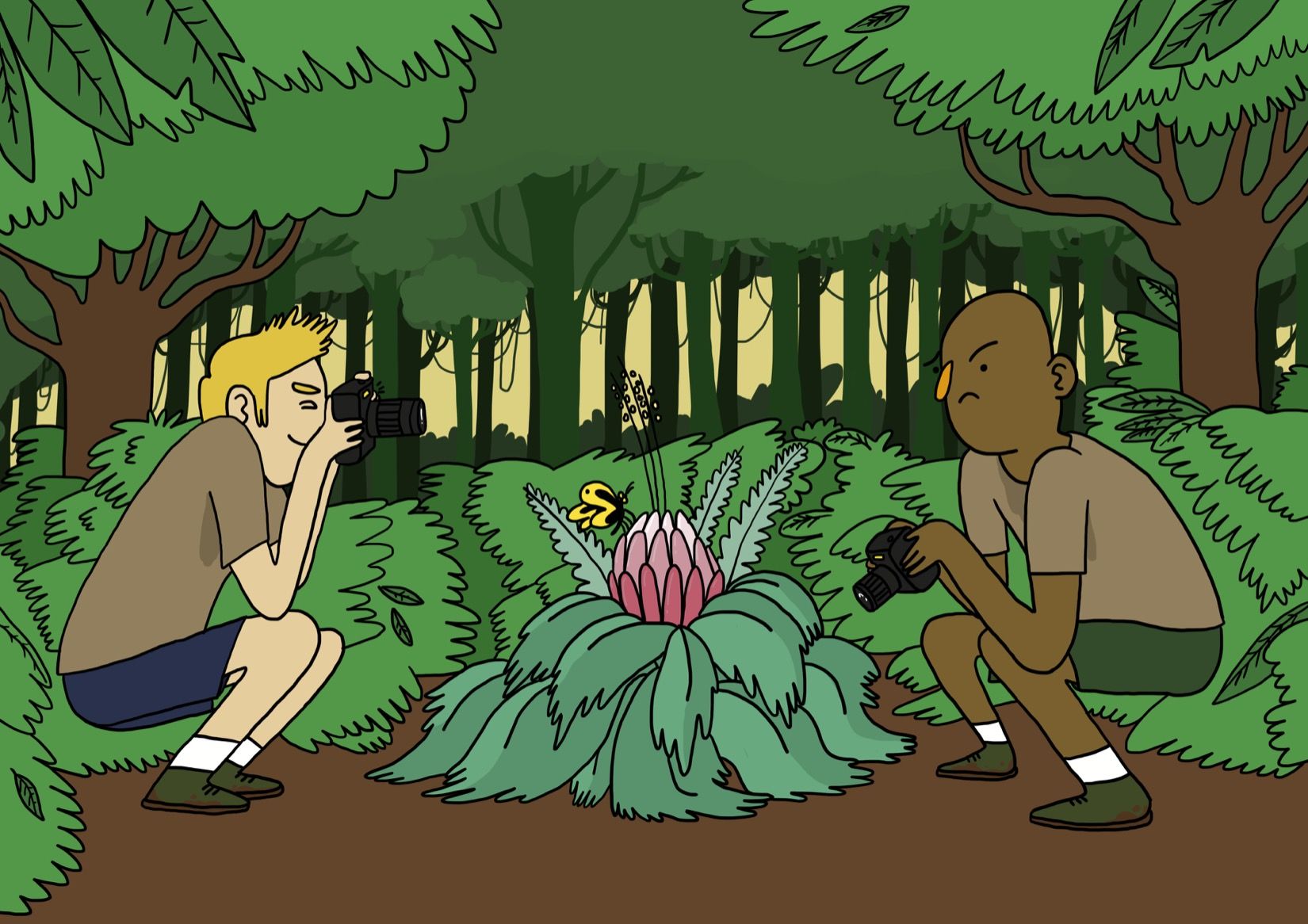 This April, National Geographic published an issue dedicated entirely to the subject of race. On the cover was a photograph of Marcia and Millie Biggs, who first went viral in 2007 when NatGeo called them “million to one” biological anomalies. Below their portrait is the line: “Black and White. These twin sisters make us rethink everything we know about race.” Together, the image and text present Marcia and Millie as a symbol for a post-racial future without taking into account the fetishization that can follow this kind of representation.

National Geographic’s decision to publish an issue that tackles the subject of race is peculiar for a magazine that for so long published both explicitly and implicitly racist content. The magazine editors are aware of this contradiction. So much so that an apology from the current editor-and-chief, Susan Goldberg, is included in the issue. The apology outlines the ways in which National Geographic has historically turned a blind eye to racial injustice in America, all the while exoticizing countless communities abroad. The apology is far from thorough. Even Goldberg admits that it represents a first step, as it fails to adequately address the magazine’s legacy of racist image production.

National Geographic presents itself as a popular science and educational organization, but its most powerful tool is arguably the magazine’s artistic reputation: it is a publication that seeks, first and foremost, to dazzle its readers with beautiful images. In an interview at Brown’s Watson Institute, Professor of Anthropology Catherine Lutz commented, “In the past, [the magazine] represented many white middle class readers’ wish to see themselves as open to the world, first through colonialism, then through tourism and cosmopolitanism. I think it still serves that role of implicitly telling Americans who they are in relation to the rest of the world.” Lutz co-authored the 1993 book Reading National Geographic with Jane Collins.

Though science is a discipline rooted in empiricism, it interacts substantially with the subjective realm of art. Our contemporary world is filled with various examples of this overlap—Planet Earth documentary series, Natural History Museums, and the MIT Visual Arts Center. Equally, early developments in modern science were deeply tied to visual culture.

Visual information, more so than numerical data, has been used throughout history to make arguments both about humans’ relationships to other humans and to the non-human world. The Renaissance brought about an increased interest in the documentation of the natural world and the creation of thousands of images—geographical maps, botanical sketches, and anatomical illustrations, among others. Early scientists relied heavily on visual tools to explicate their findings and to increase the value of their books—illustrated books could be sold for higher prices. Illustrations of plants and animals were also included to demonstrate greater intellectual authority, as the viewer would assume the illustration was done ad vivo (from life), and therefore was more accurate even than a textual description.

In this period, wonder and exploitation operated hand in hand.  Nature, widely considered to be the extension of God, was seen as perfect, designed to bewilder its witnesses. But as the Renaissance overlapped with the colonization of the Americas and Africa, God’s world was also stratified: creation existed in a hierarchy that visual artists then replicated. These images reflected their authors’ European biases. Colonized people were often depicted as closer to nature while Europeans were likened to celestial figures. Artifacts  from this period are visible to this day, such as the painting “Discovery of the Mississipi by de Soto,” by William H. Powell, which still hangs in the United States Capital building. In it, De Soto is perched high on his white horse and painted in the brightest colors. The Native Americans, in contrast, are cowering close to the ground without clothing or protection.

National Geographic hired the historian of photography John Edwin Mason to analyze and critique the magazine’s own archives for its Race Issue. A professor from University of Virginia specializing in African history and the history of photography, Mason’s commentary is firm and unforgiving, “Until the 1970s, National Geographic all but ignored people of color who lived in the United States, rarely acknowledging them beyond laborers or domestic workers. Meanwhile, it pictured ‘natives’ elsewhere as exotics, famously and frequently unclothed, happy hunters, noble savages—every type of cliché.” Though technically impressive, much of the photography encouraged a colonial gaze. For example, National Geographic’s coverage of the apartheid in South Africa is almost entirely void of Black South African perspectives. “The only black people are doing exotic dances…[or are] servants or workers,” Mason writes. “It’s bizarre, actually, to consider what the editors, writers, and photographers had to consciously not see.”

As Mason’s analysis makes clear, photography exists in more of a liminal space between objective and subjective practice than science does. The audience that consumes photographs at once thinks of them as irrefutable evidence, a captured moment of reality, and as artwork, more closely linked to emotion than to fixed meaning. Photography is interesting precisely because it so effectively captures what links science and art to each other. A photograph is at once objective and subjective, fixed and curated, timeless and contextual. Because of this, photographers often are not held responsible in the same way writers are for the content they produce. Perhaps the technology of the camera places its user at a greater distance—it is the camera that captured the image, the lens that bent the light, not the hand of the photographer.

The extensive writings by photographer-writers, such as Susan Sontag and more recently by Teju Cole, have helped problematize the relationship between photography and objectivity. Both Sontag and Cole regard photography as a series of choices that tell the viewer more about the photographer than their photographed subjects. These choices—composition, color, angle of vision—come together into a kind of argument the photographer is fashioning around their muse.

Take, for example, the cover photo of Marcia and Millie Biggs, which neatly captures the April issue’s overarching argument, mainly that race has no genetic basis. What else could explain these twins, whose coordinated outfits, yet contrasting skin and hair highlight the paradox between their audience’s understanding of siblings and race? Siblings, after all, are intimately connected and share private spaces whereas Black and white people are thought to have different ancestries and inhabit separate private and public spaces. The photograph fails in its false optimism: American society has not transcended race, it remains a problem in its history and in the fabric of its present. Though the rest of the magazine addresses these issues, the cover suggests a raceless future, exploiting the twins for shock value.

In her article for the New Yorker, “The National Geographic Twins and the Falsehood of our Post-Racial Future,” Doreen St. Félix argues that the cover at once debunks and reinforces scientific racism: “The issue’s abstract says that ‘race is a human invention,’ and that skin color has misguidedly been used as a ‘proxy’ for race. And yet the magazine cover undermines all of these correctives. ‘Black and white,’ it reads, under the portrait of the twins.” There are plenty of people in the United States who continue to believe races bear meaningful genetic differences.

Of primary concern for St. Félix is the fetishization of interracial children: “Multiraciality ought not to be the vessel for social hope.” And so even in an issue that attempts so carefully to address its racist history, even though it includes several articles analyzing the political and social repercussions of American racial injustice, the start to this conversation is a photograph of interracial twins. So much of empiricism is rooted in the act of observing, of eyeing a subject closely. The photograph of the twins not only makes them a vessel for social hope, but of scientific inquiry. That is another thing about the photograph: most of the discourse takes place between the photographer and the audience.

Take a photograph and place it in a scientific magazine, and it immediately becomes difficult to separate fact from fiction. Since the sciences are still commonly perceived as objective disciplines, a photograph labeled as scientific could be seen as even more objective—just showing the world ‘as it is’—thus making embedded racism more insidious, and potentially harder to delineate. Knowing this, how can we, as consumers of science media, train ourselves to separate fact from fiction? The kind of analysis Cole and Sontag practice, which Mason also applies in his work with National Geographic archives, calls on one to acquire a more nuanced visual literacy—to find the human hand lingering at the edge of the frame.