Means to a Beginning 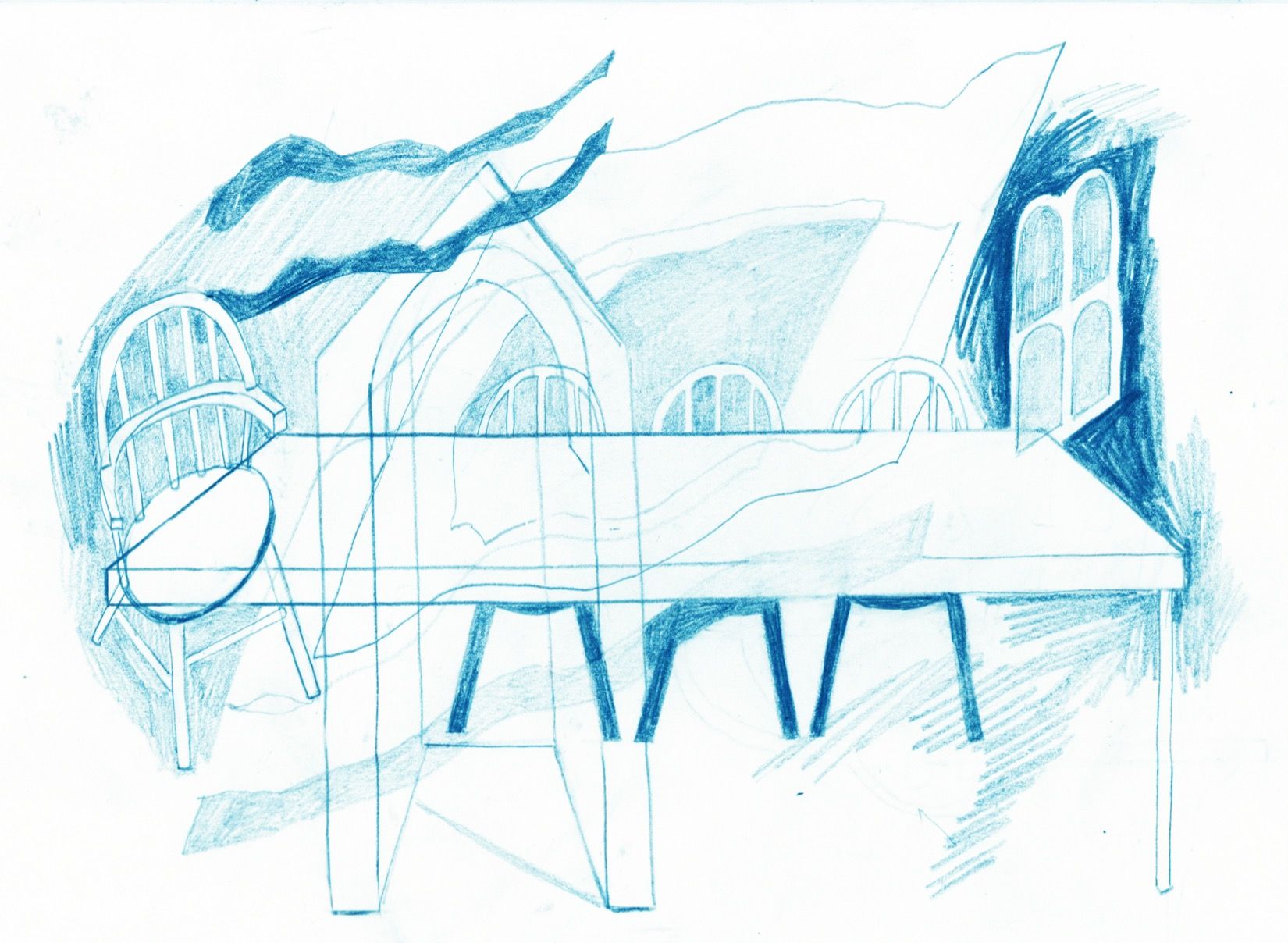 On Thursday, March 8, the Brown Middle East Studies department hosted a panel discussion titled “Permission to Speak: Boycott and Politics of Solidarity” as part of the Critical Conversations series. The goal of the event was to allow five contributors from the book Assuming Boycott: Resistance, Agency, and Cultural Production, Kareem Estefan, Ariella Azoulay, Laura Raicovich, Nasser Abourahme, and Sherene Seikaly, to speak freely before a public audience at Brown University about the politics of the Boycott, Divestment, Sanction (BDS) movement in the context of the Palestinian struggle for statehood. BDS is a Palestinian-led campaign that promotes various forms of boycott against the State of Israel in order to pressure the government to comply with international law standards. The speakers invited to this panel represented a range of disparate backgrounds—from professions in academia to artistic production, and from identities that represent Israel, Palestine, and various Arab countries.

The content of the panelists’ discussion, specifically the breadth of issues, extended beyond the scope of the call for BDS and even the conflict with Israel. Rather, the panelists chose to speak on the greater contemporary issues regarding Palestine, of which the call for BDS only represents a small part. Abourahme, for instance, pushed back on Palestinian return to what is now Israeli land as it is presently conceived as “restoration” of pre-1948 boundaries and suggested instead to think about return as the revival of the possibility of a Palestinian future. Additionally, a significant amount of the panel’s first part was spent discussing boycotts in disparate contexts outside of the Israeli-Palestinian conflict, specifically regarding their efficacy in the contemporary art world in, for instance, declining to host art installations from Israeli artists complicit with their state’s crimes. Kareem Estefan and Laura Raicovich both addressed the implementation of boycotts as a means of decolonizing institutions, museums, and other spaces of expression. Estefan also referred to the cultural boycott against apartheid in South Africa directed at art or music that supported the regime. The book Assuming Boycott discusses boycotts from around the world, from South Africa to Cuba, not just BDS singularly. The conversation, both in the richness of its scope and the diversity of the panelists’ perspectives, offered value for all members of the University community, regardless of their ideological orientation or their individual stake in the Israeli-Palestinian conflict. Effectively, it served as a crash course on cultural boycotts––Estefan memorably proclaimed them as beginnings, not ends to activism––and as the conversation moved toward the intricacies of BDS and the Palestinian case, the panel remained candid and open as an educational space. Although the panelists held personal views on the BDS movement—which is commonplace, expected, and perhaps even necessary for rigorous university settings—the panel did not come to a political consensus on the efficacy and implications of BDS, much less the greater Palestinian-Israeli conflict. The agenda of the panel was unquestionably an academic one.

Jared Samilow, a member of Brown Students for Israel, a student group that encourages conversation about the right of a Jewish state to exist, took great issue with the aforementioned event, crafting a condemnatory op-ed in the Brown Daily Herald entitled “Academic Boycotts are Bad for the Academy.” Samilow’s arguments revolve around multiple flawed assumptions. To begin, he equates academic discussion on boycott of Israeli academic institutions to university-sponsored pro-boycott propaganda, assuming that simply because Beshara Doumani, the Director of Middle East Studies at Brown, and the five panelists exhibit personal support for the academic boycott of Israel that aims to boycott Israeli universities complicit with the crimes of the state, the discussion was a university-approved sponsorship of such an action. Samilow argues, from the very beginning of the article, that academic freedom should be prioritized at the cost of Palestinian-Israeli politics. What Samilow misses, however, is that this conflict is less a political issue than a humanitarian one. There are no two equal sides but an oppressor and an oppressed; Samilow advances the inviolability of freedom of expression even at the cost of human lives, a position that finds its roots in Western political thought.

While boycotting Israeli institutions may seem the most apparent way in which academic freedom is deliberately restricted, limiting campus conversation on the academic boycott of Israel and BDS is just the same. One of Samilow’s critiques of the panel was that the conversation lacked ideological diversity, demonstrated most evidently through the lack of Israeli voices. Professor Ariella Azoulay, however, spoke from her background as an Israeli citizen. She explained to the Independent, “I am not counted by the author as an Israeli scholar.” By openly discrediting Azoulay’s voice as unworthy of representing an Israeli perspective, Samilow exemplifies dangerous, anti-democratic ideology that seeks to diminish dissenting voices within the Israeli nation. Azoulay experiences this ignorance often as a result of the Hasbara propaganda regime of fear, which “decides who is Israeli and who is not, in a way that Israeli scholars are only those who act as spokespeople of the state,” according to Azoulay. Hasbara is a public diplomacy tool used by the State of Israel to spread a positive image of itself abroad. This silencing of specific Israeli and Jewish voices is not an isolated occurrence; another Jewish professor at DePaul University, Norman Finkelstein, whose parents survived concentration camps during the Holocaust, was denied tenure and later denied entry into Israel due to his work condemning the Israeli state.

It should be noted, too, that Critical Conversations actually does work towards expanding “diversity of thought” or “ideological diversity” to otherwise marginalized Palestinian and Israeli voices—just not the hegemonic sort envisioned by Samilow and his ideological counterparts. The production of knowledge about Palestine and Israel is fundamentally skewed—arguing that a panel like Critical Conversations must present a balanced conversation or equal representation of the two sides ignores the disparity between Palestinian academia and Israeli. For Palestine, the sole source of academia exists within the diaspora, which is significantly less powerful than the plethora of Israeli academic institutions that wield immense knowledge power in Israel and the United States. The Institute for Palestinian Studies, the oldest leading source of scholarship about Palestinian affairs and National Archive for Palestine, has its main offices and library in Beirut, while other central hubs for Palestinian studies are located at Columbia University and the School of Oriental and African Studies at the University of London. Academic activity within the occupied Palestinian territories is largely inhibited by the Israeli state, whose total control over the everyday functions of Palestinian universities, such as the mobility of faculty and students, hampers any productivity.  The problem for Palestinians goes beyond just one regarding the production of knowledge to that of access to education, since residents of the occupied territories are also often barred from Israeli universities.

This imbalance in knowledge production translates to an imbalance in power as well; events such as Critical Conversations present the opportunity of elevating voices otherwise marginalized. To criticize the dominance of viewpoints sympathetic to the Palestinian cause at a single event demonstrates ignorance and a failure to understand the need for marginalized voices to receive representation and space. And to say that Doumani, a tenured professor who specializes in the social history of Palestinians, cannot host academic events that analyze Palestinian political identity has problematic implications for academic freedom at Brown and other college campuses.

Last March, a similar condemnation of academic discussion occurred when a talk by a Jewish survivor of the Holocaust about the mistreatment of Palestinians at the University of Manchester was censored and labelled as anti-Semitic by university administrators after being lobbied to do so by the Israeli ambassador. In another instance, following supposed lobbying by pro-Israel organization StandWithUs, University of Cambridge threatened to cancel an event about BDS altogether last November due to concerns over neutrality that arose from the event chair being Palestinian. Finally, a talk scheduled for next month at Arizona State University by Hatem Bazian, a chair of American Muslims for Palestine, about BDS almost faced cancellation when he refused to sign a contract from the university stating that his talk would not engage in boycott of Israel.

Despite claiming to be a bastion of acceptance and left-leaning thought, Brown also harbors funding and representation imbalance between Israel and the rest of the Middle East. One need look no further than the disparity between the sprawling, well-endowed Hillel House, which receives funding from Hillel International, and the Brown Muslim Students’ Center, housed in a dark basement room of an aging freshman dorm, to get a feel for this problematic dynamic. Though all students are entitled to a place of community worship for their respective faith, Hillel has become quite politicized in recent years due to large amounts of funding from Israel that tie it directly to Zionism and, in the process, undermine the communal space for Jews of all orientations vis-à-vis Zionism. Brown also established the Israel Fund in 2016, which it hopes will soon reach its $10 million endowment goal, in conjunction with the Watson Institute for International Affairs and with the purpose of promoting research and opportunities in Israel and the Middle East. Recent revelations about the creation of the Israel Fund without any involvement or input from the Middle East Studies department, as well as the fund’s role in financing a 2017 Wintersession course to travel to and to study Israel/Palestine, have underscored the blatantly political—rather than academic—nature of this endeavor in addition to its history of deceiving students. One cannot help but wonder the reasons for the discernible absence of a Brown Palestinian Studies Department, a Brown Palestine Fund, and tenured professors from Palestinian institutions.

While lobbying by foreign governments or contracts banning boycott have yet to surface at Brown, organizations like CAMERA and Canary Mission are present among student and professor affiliates; these groups are known to blacklist students and professors who utter anything remotely critical of the state of Israel or Zionist settler-colonialism as anti-Semites. They have the capacity to wrongfully erase perspectives critical of the Israeli state and remove individuals from their careers through networks that engage in undeniable academic censorship, leaving students and professors who harbor any empathy for the Palestinian struggle afraid that their careers could end if they so much as speak freely and openly express their sentiments. When Raicovich, one of the five speakers on the panel and previous Director of the Queens Museum, declined to host the Israeli mission to the UN’s re-enactment of the 1947 Palestine partition vote at the museum due to the trauma experienced by Palestinians by this event, she later faced accusations of anti-Semitism and eventually resigned from her role. Estefan, another speaker on the panel, told the Indy, “Several of my friends and colleagues, whether of Arab, Jewish, or other backgrounds, have been subject to these bogus ad hominem attacks. But what we are calling for, when we advocate BDS, is in fact co-resistance: the coming together of people of conscience against the ethno-nationalist divisions imposed by Israel and the political bodies that legitimate its colonial policies, to envision an egalitarian, peaceful co-existence with Palestinian self-determination.”

It goes without saying that the March 8 Critical Conversations Panel was crucial in efforts to level the playing field for University discussions regarding the Israel-Palestine conflict that persistently biases the Israeli perspective. When engaging with frameworks of settler-colonial oppression designed to value only certain voices, one cannot overstate the importance of providing a space for discussing the promises of academic boycott. The BDS movement constitutes First Amendment-protected free speech in the United States—as argued by the ACLU—but has nonetheless been declared illegal in 24 states and many additional localities. The privileges afforded by a liberal education include the active practice of processing different views to form individual opinions—a privilege that, one must remember, is absent from larger discussions about the Palestinian-Israeli conflict.