Petra Collins and the problem with the female gaze 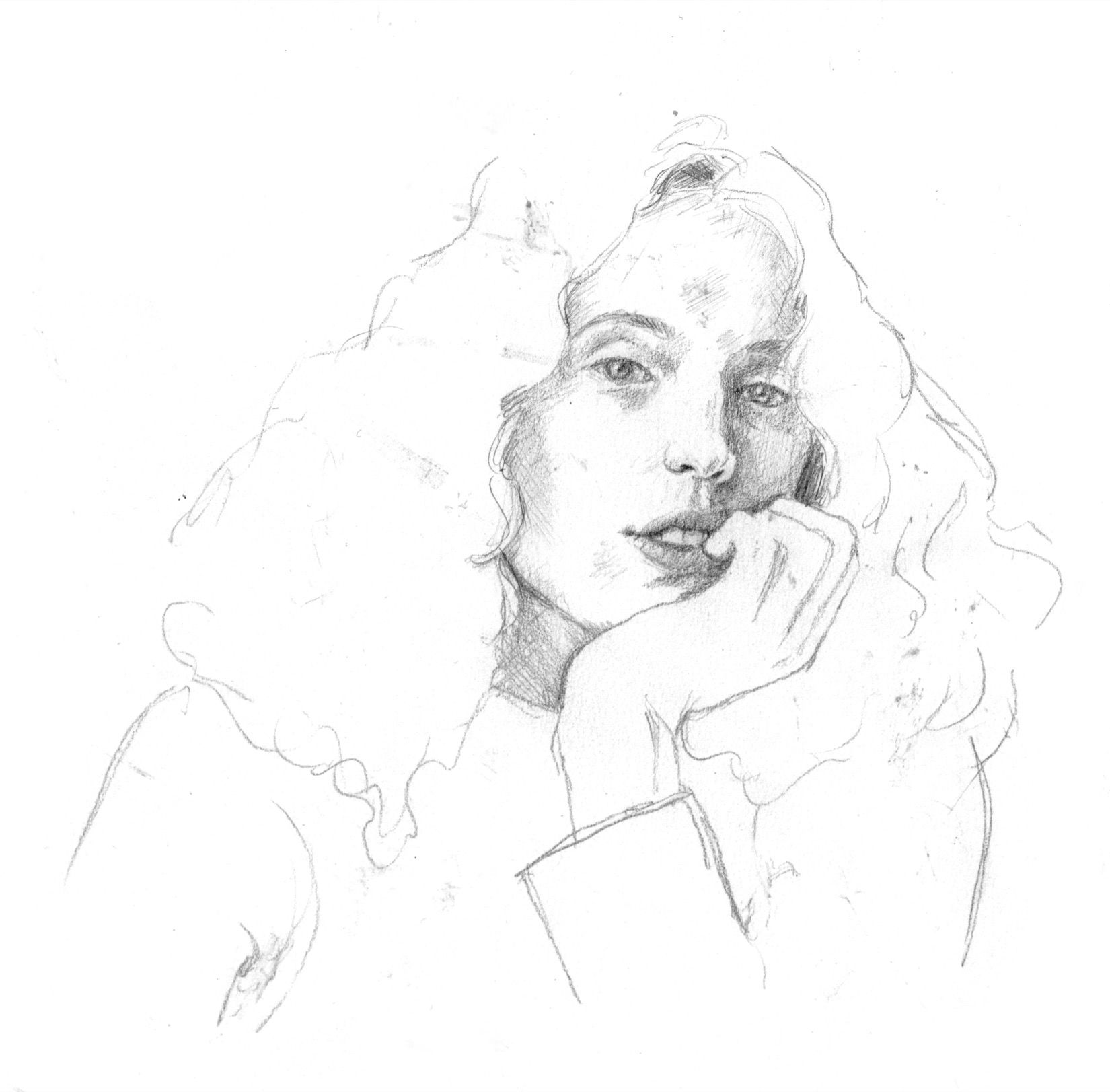 Two women press their cheeks together, with dark hair falling in their faces and lips parted to reveal the radiant white tips of their top front teeth. The girl on the right is looking at the camera, the other gazing down. The look on both of their faces evokes the classic suggestive, come-hither look of a covergirl on a men’s magazine, but Instagram’s square frame zooms in on the point of contact between their skin, cutting off the rest of their bodies and the outer sides of their heads—there’s nothing to leer at. A ray of sunlight seems to be casting through the mesh of their conjoined hair and a soft yellow glow illuminates the glossy peach-colored makeup on their eyelids and lips. The image seems to be capturing a fantasy, but what that fantasy actually is feels unclear. Elements of the image suggest sexual tension, but the photograph’s subjects don’t really acknowledge one another, making an erotic interpretation both tempting and just far enough beyond reach to feel out of line. They are physically close, but nothing about their relationship is indicated by the image.

This image is typical of the work of Petra Collins, the Canadian photographer and artist. Most of the subjects of Collins’ photographs are cisgender women, in seemingly relaxed or unguarded poses. When there is more than one woman, they are often touching or holding each other closely. Sometimes the intimacy between women in Collins’ photos is platonic, sometimes more explicitly romantic or sexual, but most often it’s indeterminate enough to elude a queer label. By far the most distinguishing visual feature of these images is the frequent use of colored lights to wash her subjects in an ethereal blue, purple, or pink glow. In any case, the palette skews towards soft pastel shades, the quality of the image always somewhat faded or blurred. Looking at a Petra Collins photograph or watching one of her videos is like looking at the world through foggy, pink sunglasses.

At 25 years old, Collins has already achieved remarkable success, with her work being displayed at major galleries and museums around the world. Her work has been featured in major fashion magazines including Vogue, Dazed & Confused, and i-D. She’s directed a music video for Selena Gomez, and more recently a video for Cardi B’s single “Bartier Cardi.” Perhaps most significantly, she has over 700,000 followers on Instagram. Clearly, there’s a widespread popular appeal to her dreamy aesthetic beyond the insular art and fashion worlds.

Many publications, including the New Yorker, have called Petra Collins’ work emblematic of the ‘female gaze,’ in contrast to the male gaze that has been predominant in centuries of Western art. The idea of the hegemonic male gaze is perhaps most famously summarized by the art historian John Berger in his 1972 BBC series Ways of Seeing: “You painted a naked woman because you enjoyed looking at her, put a mirror in her hand and you called the painting ‘Vanity,’ thus morally condemning the woman whose nakedness you had depicted for your own pleasure.” Under the male gaze, there is no woman without the implied man looking at her and dictating how she gets to be seen.

What the female gaze entails isn’t as defined, though it can loosely be understood to mean the absence of the ‘male gaze,’ with women instead deciding how their bodies are presented. Petra Collins’ first solo show, Discharge, mostly featured photographs of her friends that she had taken starting at age 15, during her middle-class upbringing in Toronto. Many of these images had been originally featured on the online teen girl magazine Rookie. In an interview about the show, Collins explained to the Cut, “I try to create images of things that aren’t necessarily spoken about, or what we would want to see—not the clean version of teenage girlhood that we usually receive. We’re taught that women have to live these weird double lives, like once you get your period and once you start growing hair, you have to immediately hide it.” When it’s women rather than men doing the ‘gazing,’ there’s less of an urge to hide the unsexy parts of womanhood.

Many of the images in Discharge do convey a special intimacy: three girls smoking weed on a bed with distant looks on their faces; a girl resting her head on a table, looking wearily off to the side; another girl looking down at her phone at a party, seemingly ready to escape. Everyone looks good, but no one is being made to look sexy or perform for some imagined male audience.

Another indicator of Petra Collins’ conception of the female gaze can be found in her insistent preoccupation with bodies as harboring feminist power. In a 2013 HuffPost article, Collins recounts how her Instagram account was deleted, because of a photo that showed a closeup of her hips in a bikini, pubic hair peeking out from its edges, bathed in green lighting and sparkles in typical Petra Collins fashion. Of the incident, Collins wrote, “Through this removal, I really felt how strong of a distrust and hate we have towards female bodies. The deletion of my account felt like a physical act, like the public coming at me with a razor, sticking their finger down my throat, forcing me to cover up, forcing me to succumb to society’s image of beauty.”

Collins’ language here suggests that her act of presenting her body in this way is a sort of defiance. The language is in keeping with what curator Aria Dean calls “selfie feminism,” in an essay in The New Inquiry, which she defines as the idea “that the control afforded through the act of self-imaging is invaluable; nothing less, in fact, than the primary feminist tool for resistance.” Dean adds, “the claim follows a logic in which circulation of personal narratives through Instagram and other social media platforms is supposed to provide points of identification for all women, everywhere.” Dean critiques this assumption of a universal womanhood, with particular regard to its racial politics: “Intuitively, the selfie still feels valuable, but the compounded male, white, and colonialist gazes that work so hard to blur Black women and femmes into oblivion have too much force behind them to leave me with enough agency both to politicize a topless mirror selfie and to believe in that politicization one-hundred percent.” For Black women, trans women, nonbinary individuals, and all others who have been “blurred into oblivion” to varying degrees, simply being visible seems like a shallow goal.

In this vein, there’s something suspect about a thin, conventionally attractive, white, and cisgender woman like Petra Collins positioning the display of her pubic hair as such a vicious battleground of the patriarchy. It’s true that social media websites arbitrarily delete or flag content in ways that betray deeper prejudices, but Collins’ article went viral and her Instagram account was restored. It’s difficult to believe that her account’s revival and the attention she gained in the process accomplished anything for anyone besides Petra Collins.

Still, Petra Collins’ work is undeniably pleasing to look at. The new “Bartier Cardi” video showcases rising stars Petra Collins and Cardi B at their finest. Rows of sculpted and glistening men obediently chant Cardi B’s name, the rapper in red lingerie and Swarovski-encrusted corsets raps into her fiancé’s face, and a duo of beautiful women fasten 21 Savage’s neck in a leather collar—all awash in those blurred, soft shades of blue and violet and pink and green. “Bartier Cardi” seamlessly blends the acerbic qualities of Cardi B’s music and persona with Collins’ trademark aesthetic of soft femininity. In an interview with the VICE blog Garage, Collins explained that her main concern in directing the video was “wanting every single woman in every scene to be like, a goddess.”

In a sense, what Collins has done here is flip the male gaze entirely: women are goddesses, with all the power and control, and it’s the men who are objectified and gawked at. It’s proof that she very much has her finger on the pop cultural pulse, which has embraced a feminism that celebrates strong, singular female icons like Cardi B. It can’t be stressed enough that watching “Bartier Cardi” is incredibly satisfying to the deep cultural craving to see women wield any sort of power, even in a three-minute music video. But beyond that, there’s little political meaning in turning Cardi B, who is already famous and widely admired, into a goddess. There are no “points of identification” to be found in making someone who is already seen as beautiful even more beautiful. That isn’t to detract from the significance of Cardi B’s success or the fact that the label of feminism is now something that’s aspired to rather than rejected, but to rightfully designate the feminism present in this sort of work as purely aesthetic.

This is a persistent theme in Collins’ photography and videos, from her recent, more polished work for Cardi B and campaigns for Gucci, to her oldest work in Discharge. The title of that show is meant to evoke an unsanitized depiction of the body, but one of its featured images shows an impossibly clean red lace bikini discarded on the floor. Her subjects may never be outrageously sexualized or exploitative, her images never crafted to please men in a straightforward way, but they don’t do much for women or nonbinary people either—that would require more reckoning with her subjects as people, more confrontation with traditional notions of beauty and femininity, and a less undiscerning celebration of power. Many people in the world never get to be beautiful, but in Petra Collins’ visual universe, no one ever gets to be ugly.

JANE ARGODALE B’18 is searching for good selfie lighting at this very moment.