A review of the 2018 RISD Faculty Exhibition 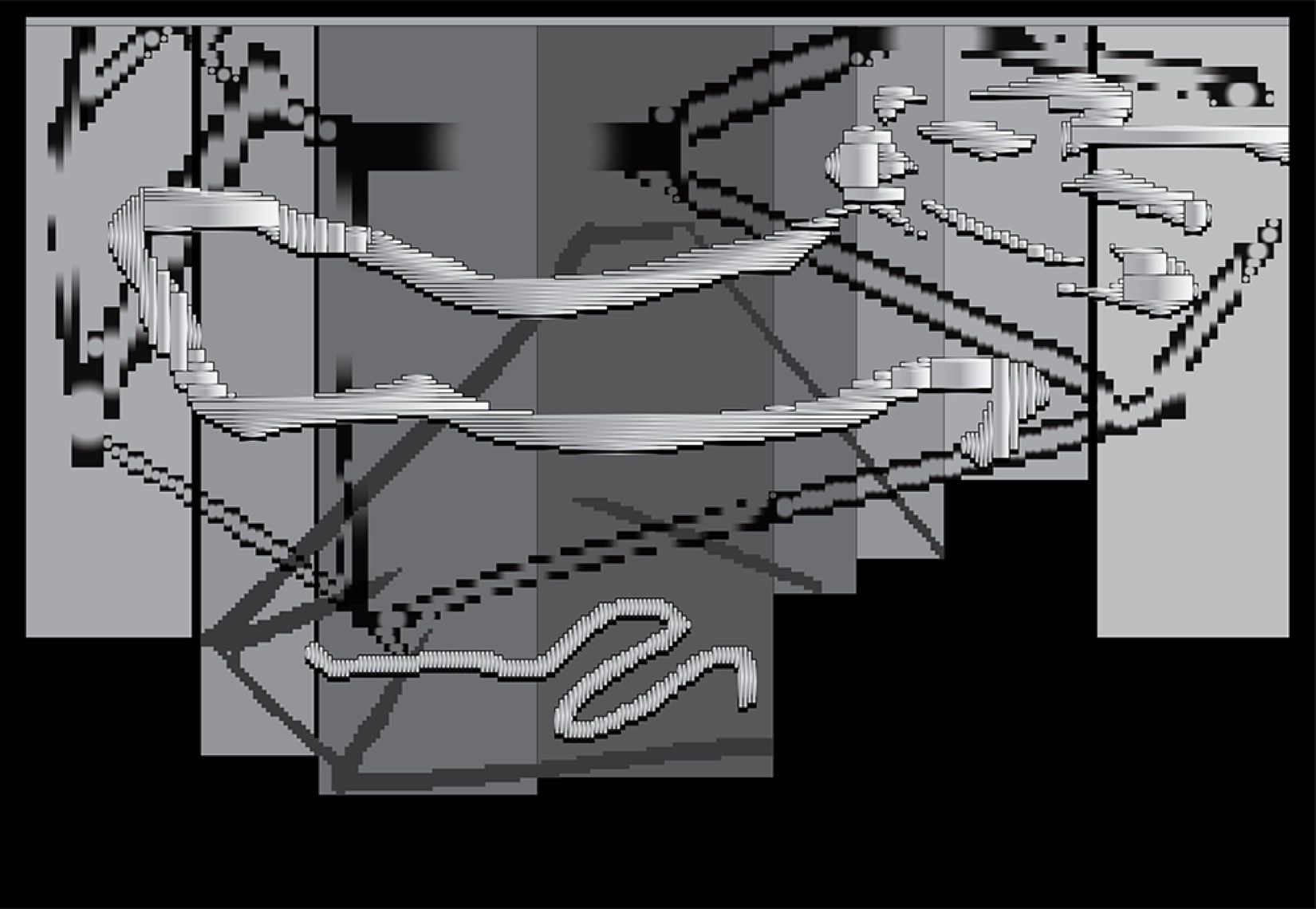 One time, during the bizarre event that is my primary studio course at RISD, we spent two hours thinking hard, in groups, about the nature of our discipline. The question was: What is graphic design? It reminds me of other profoundly vague questions I have been asked to consider in the past, such as: What is literature? Or: What is translation? But this time, when my group and I went on to collaboratively read the text of a diagram we’d created to answer the question at hand, our teacher remarked that many of our responses circled around permission. Who permits whom to do what? What kinds of work do the conventionally accepted parameters of our discipline permit us to make? Are you permitted to fight your boss, your teacher, or your superior when you think they’re fundamentally wrong? The 2018 RISD Faculty Exhibition at the RISD Museum asks, to me, similar questions of what disciplines are and how we enforce them.

This show is the latest installment in a long-running series that used to be called the RISD Faculty Biennial, though the last time it was held was in 2015. All active RISD faculty are invited to submit their work, done either individually or in collaboration, either previously finished or specially-made for this exhibition.

And here’s what it comes down to: the Faculty Show strikes me not as bad, but as weird and untimely, which together might amount to the same thing as being bad. I admit to being very uncharitable with this assessment. A significant qualifier, probably the primary reason for the incoherency of the exhibition, is that the Faculty Show is unjuried, meaning space is made for any piece a current faculty member submits. The work that made it into the gallery now stands in curious arrangements. Hung on one wall is a pristine, transcendently crafted wooden rake, directly across from a seemingly unrelated textile filled with large, dark blocks.  There is a massive painting of a white cat whose eyes have seen every sin you have ever committed, rendered by Illustration faculty Jamie Murphy Hlynsky. The god-cat is in approximately the same space as what looks like a large net encrusted with salt crystals hanging from a frame, a piece you later learn was 3D printed by Foundations teacher Kai Franz. In the gallery downstairs there is a fluttering, abstract graphite animation by Amy Kravitz, and diagonally behind the gallery monitor’s desk there is a sculpture by Tanya Crane titled User Friendly Black.

I sat in the monitor’s desk one afternoon, a Friday span of four hours, during which sixty-two people passed through the gallery. I was there to cover the shift of another student gallery worker, one of many such monitors on the work-study payroll at RISD. Sitting in the Faculty Show that afternoon, I was very close to User Friendly Black as visitors had what was presumably their first encounter with the sculpture. It depicts what appears to be a Black person’s buttocks covered in powdery white handprints.

“Look at this! How funny,” said one visitor in Chinese, taking a picture of the sculpture mounted to the wall.

I did not say anything to this visitor, and my complicity could be called violence. This visitor’s passive antiblackness was representative of the general spirit of bemused, racist confusion apparent in some visitors’ interactions with User Friendly Black. Another example:  two elderly, well-dressed white men walked by, and they stopped in front the piece for a long time.

“She likes big butts and she cannot lie,” one said, contemplatively.

“What a strange window,” said the other, in an apparently non-sequitur response, looking completely past me through the window next to the monitor’s desk.

They then moved to the next piece, a very smooth mahogany cabinet by furniture faculty member George Gordon. After regarding it with conspicuous curiosity for about a minute, one of them turned to me, allowing his eyes to focus on my person, and asked:

“Excuse me, sir, could you open this for us?”

“I’m very sorry, I’m afraid the sign says ‘Do Not Touch’” I replied, in my best tone of official, ingratiating apology.

Let us pause here for a moment and return to my review of this exhibition as such. I am not here to toll a massive bell of gloom and yell “Is this what we have come to?” when I know that we have been here, were here, and that any surprise I may have felt was not at all constructive. Specifically, I am not trying to express surprise that other marginalized people would out themselves as harboring antiblackness. I am also not writing this review to solicit empathy for myself and this bizarre experience that I had; I am writing it to say that the structure of this exhibition does not do any favors for the few pieces on display that attempt to engage critically with the museum-going public.

When work is arranged to literally fit in the space and not for topical coherency, what suffers most are the pieces that attempt to enact critique. The positioning of Tanya Crane’s sculpture next to a cabinet exhibiting Shaker levels of visual utilitarianism is to make both objects seem foreign to the space. Furthermore, it shunts Crane’s sculpture further into the dusty corner reserved for “political work”. User Friendly Black is an object that seeks to critique and make physical the right that white and other non-Black people feel to interacting, often nonconsensually, with Black people who make their bodies visible in the public realm. User Friendly Black is certainly a well-crafted object, but it utilizes its craftsmanship to such a different end than a functional mahogany cabinet. One approach is not necessarily better than the other, but it to reduces both to put them literally—and more or less randomly—adjacent to one another.

To look at the pieces that were submitted, one might think that to have recognizable opinions were a quality foreign to artwork. One would think that most art, a solid half of the exhibition, existed mainly as evidence of the artist’s particular process. Without any critical apparatus, any coherent take, the very few pieces in this show that present any sort of opinion are unmoored from the possibility of interpretation. In this show, the visitor moves haphazardly between media and subjects, apparently at random. And while the advent of new, interdisciplinary curatorial practices in other museums has potential to revitalize gallery exhibitions, such is not the case here.

The mood of general disparagement I saw directed at User Friendly Black in a single afternoon indicates to me that people do not really view it as art. To the casual viewer, the large cylinder made of re-forged glass dust is recognizable as an art object and thus not to be mocked, but the sculpture that implicates its viewer is to be derided as explicit and confrontational. The conceptual atmosphere of the show is one of overwhelming silence; or rather, of solitary muttering so intense that it amounts to an unintelligible, atmospheric hum.

Walking through the galleries, the overwhelming feeling one gets is that there is just a lot going on at RISD. That there are a lot of people doing a lot of things down here at the art school. The takeaway from the show is as simple and vague as that, and as a collection it does not seem to illustrate an approach or represent a style. It is work that was pulled together from a group of professional artists who all spend some amount of their time teaching at the same institution, and that truly is the end of the concept. You thought it might be cooler or deeper than that, but it really isn’t. What’s more, to further disparage the show’s vague thesis, it is not even a lot of different people doing different things: the show is barely at gender parity, and very few faculty of color seem to have submitted to the show as well. Either that or, as is the case in the Graphic Design department, there are only two faculty members of color in the whole department. What one understands is that most RISD faculty remain dedicated to the workshop, to the manifesto of process as a practice, but that all this rumination on working ultimately breaks apart into disparate and fragmentary musings.

This is not, however, a wholehearted takedown of the entire show. If I have not already overreached whatever right I have to an opinion, total dismissal would also be totally out of line for a student like me. In my day-to-day experience of being in school, I find that most teachers are deeply invested in advancing the concerns of their students, and that teaching and learning are processes of exchange. I have had many fortifying and generous experiences, and I find that a more thorough look at the work of individual teachers often yields a more complex and compelling portrait of the artist and their concerns. And, if you can recover from conceptual whiplash quickly enough to look, there is a visible proportion of work in the Faculty Show that is engaging and meaningful—there is some work about something. The organization of the show is such that the work with opinions are situated in the same space—in dissonant visual chorus with—work that is about nothing at all. The idea of just “showing what we have” and the organizing principle of “just trying to fit every piece into the available space”—these two requirements are unflattering concepts around which to organize a show representing the concerns of current RISD faculty.

But here, let’s finish the story. A white man had just called me “sir.”

“No problem, don’t worry about it,” I cooed in my most generous and conspiratorial voice.

The pair of white men proceeded around the exhibit, in and out of my sight. After a very thorough look at everything on display, they came by my desk again on the way out.

“Again, I’m so sorry,” one of them whispered to me before he left the gallery.

This weekend marks the final two days of the 2018 RISD Faculty Exhibition.

Eliza Chen B/RISD’19 still recommends you see the show, if only to have your soul exposed before the painting titled Snowball.