Björk’s Utopia, and ours 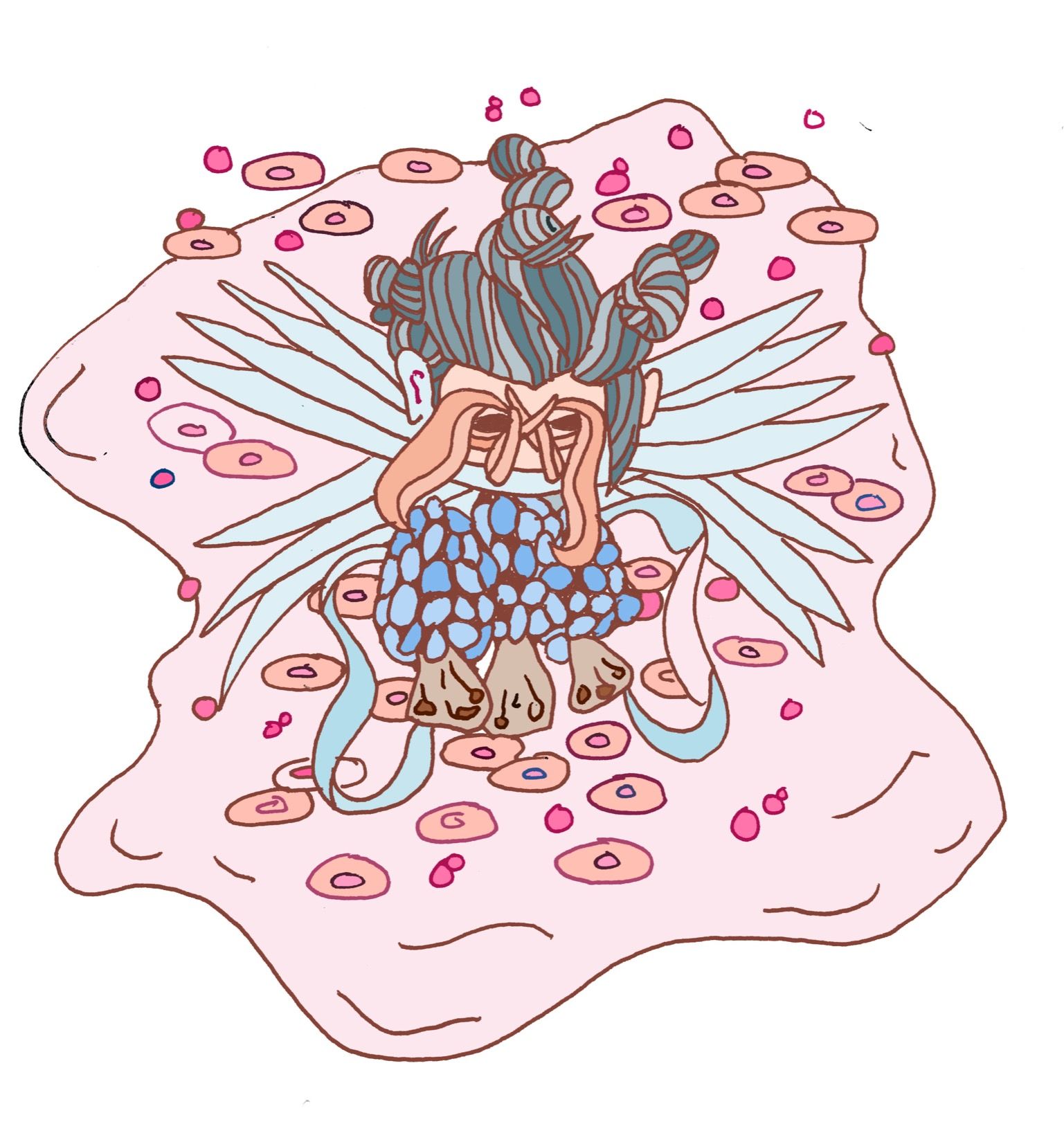 It’s November 2017, and I’m shuffling through wintry New England weather, the chill biting through my half-zipped parka. I am aware of my body’s amazing strength and complexity, the intricate cellular homeostasis maintaining a stable body temperature. Does it know, I wonder? Do my cells know that they struggle in a world that is hostile to them? That they, and by extension we, are complicit in and victims of a system that enacts violence and divides us from our fellow living beings? What to say to this apocalyptic vision? I say nothing. In response, I slip on my headphones and start playing Björk’s newest album, Utopia.

Icelandic musician Björk Guðmundsdóttir is 52 years old. Some would assume she’d run her course as a pop artist, with the releases of her greatest hits behind her. Her latest album, Utopia, however, sounds like the work of an artist spilling her guts out in youthful exuberance, still fresh and eager to experiment. It’s a 71-minute odyssey through woodwinds, birdsong, vibrant synth, uneasy and looping polyphony entering in and out of sync. Woven under, through, and above it all is Björk’s inimitable voice in all its eccentric glory. It is the yin to her last album Vulnicura’s yang, which chronicled an emotional journey following her divorce with her husband, artist Matthew Barney. Utopia, by constrast, is her self-described ‘Tinder album,’ and it wears its lovelorn longing on its sleeve. It’s an album of love for bodies, worlds, and femininity reasserted. It’s a response, a restoration, a refuge.

Utopia attempts to do many things, not all of which succeed, but what resonates the most with me is its marriage of sounds and lyricism in service of one idea: to behold the world in all its splendor and misery is a kind of utopian seeing. We’re all busy trying to articulate ever more obtuse and obfuscating theories to explain the world, or otherwise diving deeper and deeper into a chasm of post-post-ironic internet content. At their most toxic, both of these theories seem to be an advanced form of escapism. That isn’t to say that we don’t need nuanced thinking or should flee from the digital like unabashed primitivists, but there needs to be an earnestness involved; in the end, what does anything people say matter if they don’t sound like they give a shit at all? In this album, Björk’s attempt to evoke utopia is wilful, playful, naive, all deliberately. Björk’s utopia is an individual one, emerging from the bottom up rather than being imposed from above. It relies on each of us to create our own vision; we have to see before we become. And the world Björk wants us to see is one that’s flush with life, one that challenges the idea of people as isolated bodies and proposes instead containers of multitudes that collaborate for the greater good.

Björk brings us into her utopia not with a shout, but a sigh. The album’s opener, “Arisen My Senses,” introduces the sounds of woodwinds and synth, as well as Björk’s multi-layered vocals, that create the soundscape in songs to follow. In sound and form, it suggests a harmony between the natural world and the human, where neither instrumentation nor voice takes precedence. Instead, they weave around each other, coexisting. It sounds like thawing, the end of the song fading out like icebergs calving, the end of the volcanic winter of Vulnicura. Warm harp and spring flute are buoyed up by Veneuzelan electronic producer Arca’s technicolor synthesizer wash. Björk’s voice itself occupies the canopy of the song, a chorus of Björks harmonizing with themselves. They repeat phrases of the main verse, enunciating them differently, stressing different vowels. Often, the dominant line shifts from one Björk to another, panning from left to right in time with Arca’s multilayered rhythm. Halfway through, she sings of “weaving a mixtape,” a line that recurs amid wordless vocalizations, describing the album itself. It’s as though each iteration of Björk competes with the others, all working to complete a harmony, although they twist off into their own ends. I see in this a certain multiplicity of the self, the way we are composed of so much that is not us, the ‘we’ in the ‘I’. Both on a biological level, in the bacteria that sustain us and contribute to our body mass, and on a social level, in the relationships we have with our loved ones which constitute our identity as a person in a world.

The songs follow a meandering path through loss, love, and the transition between the two. When listening to Utopia, I don’t think about the healing process from Björk's divorce, although that process was evidently crucial to the conception and structure of the album; I think instead of a forest of alien, primal, gentle flora and fauna through which Björk treads, singing without filter, and of a comingling of beings intertwined, as in the title track, “Bird species never seen or heard before/The first flute carved from the first fauna.” It channels past and future, challenging us to recognize the present as the juncture between the two. We are not trapped in some eternal present, but live in our memories as well as in our dreams of the future, and in that sense, we can hold utopia inside us. There is no theory here, no plan for utopian society, but there is an impression of what it might mean to live utopically, the lived experience of bliss.

The liquid, ugly, beautiful electronic textures provided by Arca literalize this time slippage in songs that frequently meander close to and past the five-minute mark. I listen and I imagine my body liquefying the way a caterpillar completely disintegrates inside a chrysalis, completely rearranging its body to become a butterfly. The goo it becomes mostly consists of imaginal cells, undifferentiated like stem cells, able to develop into most other types of cells to suit its needs. At times, Utopia sounds like the inside of such a chrysalis, and I can feel myself being transformed into something other, something in line with my telos. At its best, Utopia evokes this queer sensation of becoming-being. Prostheses for love. A biodigital nature, a future-present not of clean Apple-white chrome, but of slippery, chromatic, warm, pulsating assemblages of the organic and inorganic, the technological and natural. I imagine Björk reborn from the body of the slug in the music video for “Arisen My Senses,” becoming something attuned to the nonhuman, just another voice in the chorus.

Some might consider Utopia an album that is more enjoyable to think about than listen to. It is long, digressive, short on immediate pleasure. What I would give for the lush ecology of “Arisen My Senses” to thread its way through the album more, thickening those sparser moments of only voice, flute, and harp, although they offer an elegant beauty of their own. Some lines verge on the comical; Björk’s story of meeting men that resemble her husband and feeling like she is “literally five minutes away from falling in love” being a particular example of the album’s occasional banality. But it doesn’t fall flat. Instead, it just exemplifies the way Björk’s music is so free of pretension, so optimistically naïve, while also so deeply unconventional, is in fact unconventional because it is so unafraid to be simultaneously blunt and oblique. In a time of division and endless sectarianism, it’s refreshing for something to embody contradiction so gleefully. A proper response to the postmodern crisis requires a willingness to confront the truth head-on and duck out of its way, weave a path through it. The album opens up that space between reality and not-quite fantasy, a space that merges the oft-confused etymologies of ‘utopia’: the good place, and no place at all.

Utopia is a sonic archive of a world that exists, shimmering, alongside our own. A world without violent borders that divide peoples, states, humans and nonhumans, a world that recognizes the human-nonhuman ecology that supersedes any hermetically sealed systems humans try to enforce. It is a utopia that’s already here, not elsewhere. I can’t help but be reminded by China Miéville when he says that “We are already in utopia. It just isn’t ours.” He speaks of injustices and the machinations of systems that subjugate entire categories of humans and nonhumans. The title track speaks of a “huge toxic tumor bulging under the ground here,” a tumor of harmful human practices that damage our connection to our own bodies, to one another, and to those beyond us. We’ve called into being something too complex for any of us to comprehend by ourselves. It’s too big. Utopia offers no pragmatic solution, but is at least a kind of musical space wherein we can rest, collect ourselves, and observe the world through a utopic lens. All things can change, Björk sings. Love can be found again, and so can hope: “see this possible future and be in it.” See it, and thus be in it.

Yes obtuse, yes difficult, yes lacking in immediate pleasure, but Utopia is not vapid. Björk’s Utopia is hardly a manifesto for change, and art doesn’t change the world by itself. But I listened to it again yesterday, and again today, and I will probably listen to it tomorrow. In her flights of fancy, I see ways to reimagine everything, ways to live better, love better. Yes, in the end, this is only Björk’s utopia right now. But if we want it to be, it could be ours, too.

Mica Chau B’21 is a collective of cells that was mistaken for a person.