The fight for the right to repair 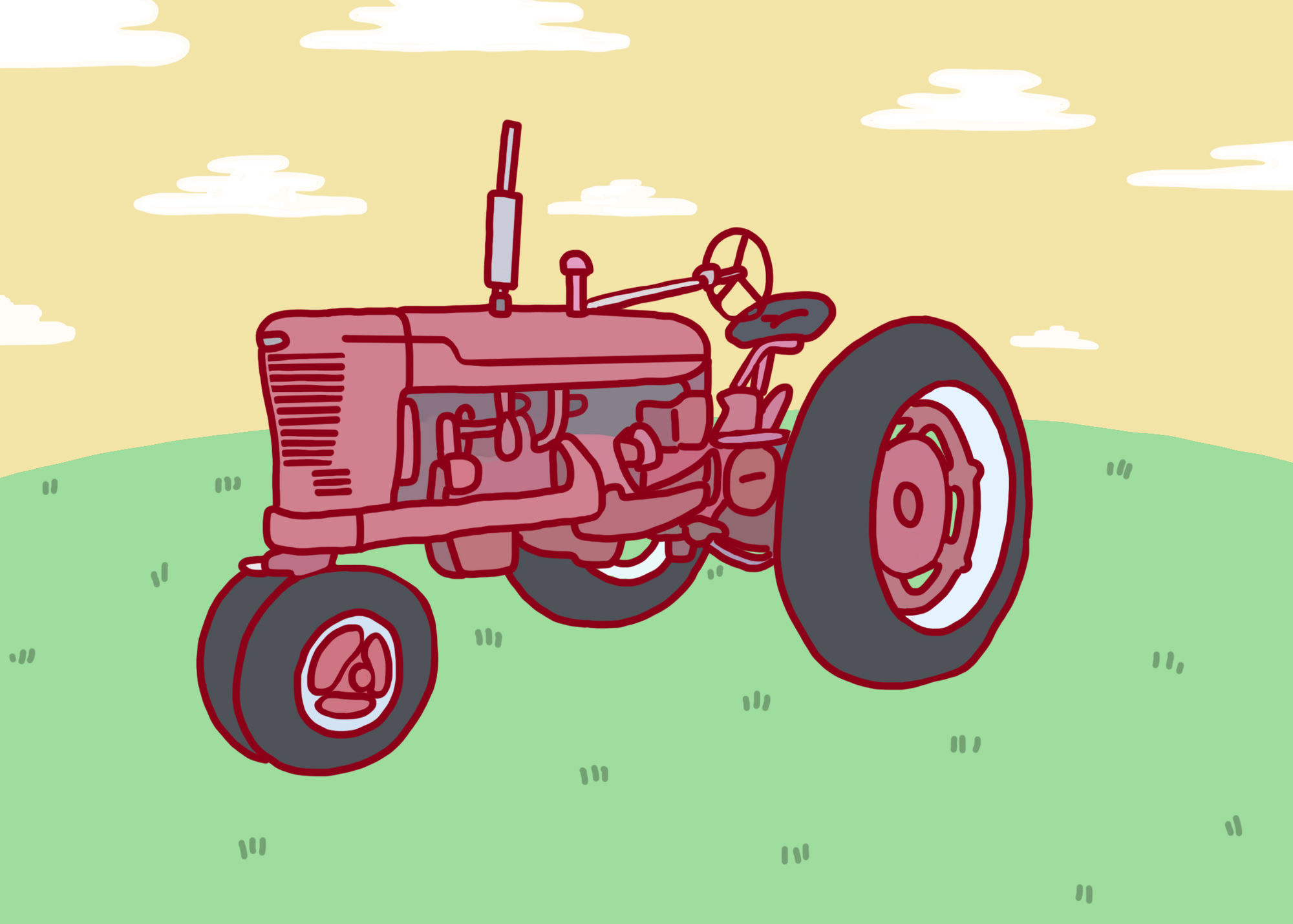 Tom Schwarz is a farmer in Bertrand, Nebraska, where he lives on the same farm his family has owned for five generations. A Motherboard Vice documentary from February 14, 2018 features Schwarz explaining why he joined a movement in Nebraska, fighting against companies like John Deere, Apple, AT&T, and Tesla, for the right to repair his farm equipment. As Schwarz gives a tour of his farm and his equipment, the camera focuses on the tractor that he first learned to drive on in the 1960s. “The beauty of that tractor in terms of repair is that I can go anywhere and get parts for it—we could tear this thing down and overhaul it in a week’s time,” Schwarz explains. The camera moves to a much larger, bright green John Deere tractor. “The seat in that tractor, over there, is more complicated than this entire tractor,” referring to the older model.

Schwarz explains that he could repair the older tractors easily and cheaply by buying used parts to make his own repairs. Schwarz can’t do this with his newer models because John Deere has placed digital locks on all of the software which operates the tractor, preventing Schwarz from running diagnostics on the tractor or replacing individual parts. Almost every part on a tractor made in the past decade has a sensor which communicates with computer operating systems that farmers can use to monitor the tractor’s operations. If a part breaks, such as a hydraulic sensor, the tractor’s entire operating system might break down. The individual sensor can’t be replaced by a farmer, because replacing the sensor requires a factory password to bypass the digital locks in order to calibrate the new sensor with the tractor’s operating system.

Some farmers in Nebraska and elsewhere in the United States have circumvented the digital locks by buying software, most of which is developed in Eastern Europe, from online forums,  allowing them to hack their tractors. Kyle Schwarting, a farmer in Atlanta, Nebraska, purchased this software to repair his own tractors when they inevitably require maintenance. Schwarting explained to Motherboard that taking his tractors back to the dealer to be repaired is both expensive and logistically impossible; as farmers face narrow windows to fertilize their crops or finish a harvest, the idea of taking a tractor to a certified dealer for a simple repair is, broadly speaking, unfeasible. Not only do these sorts of off-site repairs eat up valuable time, they also can cost the farmer an inordinate sum of money. As Schwarting explains, simply loading a tractor onto a truck to ferry it back and forth from the dealership can cost upwards of $2,000.

In an effort to circumvent these expenditures, Schwarting found a website that allowed him to buy software that would connect his computer to his tractor, run diagnostics on it, and make repairs himself. This type of ‘hacking’ is not illegal under US Copyright Law, which provides an exemption for farmers who need to break digital locks to repair their equipment. However, John Deere requires tractor buyers to sign licensing agreements, agreeing that John Deere owns the software in the tractors even after farmers purchase them for use. These licensing agreements allow John Deere to retain ownership over the tractors’ operating systems, and farmers who modify the software are liable to be sued for breach of contract.

Farmers trying to maintain their tractors aren’t the first people to recognize the need for a “right to repair.” In 2012, 86 percent of voters in Massachusetts voted in favor of a ballot initiative mandating the right to repair all automobiles. The legislation requires all automobile manufacturers to sell tools and information to car mechanics at a “fair and reasonable price,” and use a standard interface so that mechanics can access a car’s operating system in order to run diagnostics and perform upkeep. In response to the Massachusetts legislation, the auto industry agreed to make the right to repair the national standard. The legislation in Massachusetts set a precedent for activists to extend repair beyond cars to include tractors, consumer electronics, medical devices, and other products which require maintenance but can’t be repaired by consumers due to digital locks.

Kyle Wiens is the CEO of iFixit, a company which publishes and sells repair manuals and kits for electronic devices, providing consumers with the knowledge and tools necessary to repair their products. Wiens explains that the “right to repair” is actually an ownership right of consumers. “The core of a small American town is a gas station and a garage,” Wiens told the Independent. “Americans have been fixing things as long as they’ve been making them, and taking that freedom away seems un-American.” For Wiens, the right to fully own the things you buy and modify or repair them as you like is the individual right and freedom of the American consumer or small business owner. The local mechanic, the small farmer, or the creative tinkerer fits the bill of individualism and entrepreneurship that this vision prescribes. Wiens explains that cars in the 20th century could be fixed by local mechanics or by car owners themselves, because replacement parts were widely available in the market. Today, large technology companies hold a monopoly on repairing their own devices, which harms both local repair shops and consumers who wish to repair or tinker with their devices.

Over the past two decades, the face of consumer goods in the United States has changed as more devices are digitized and connected to a network. As consumer products have become highly technical and embedded with copyrighted software, consumers have lost the ownership rights they once enjoyed. Wiens and Gay Gordon-Byrne, executive director of Repair.org, wrote in October 2017,  “In past decades, companies that made electronic equipment typically provided the information needed for repair—and usually free of charge. Computers came with schematic diagrams showing how the various components on the circuit boards were connected.” However, manufacturers have increasingly kept this information secret in order to maintain a monopoly over repair services: “It’s ironic. We live in the age of information. And yet, at the very moment when information about how to repair electronics should be easiest for owners to get their hands on, it has dried up.”

Not only have manufacturers kept necessary repair information about their products secret, but federal copyright laws protect the software in personal electronics, cars, tractors, and other devices with digital chips from modification. In 1998, Congress passed the Digital Millennium Copyright Act (DMCA), which, among other things, grants a unique legal status to software in consumer devices. Much of the software in personal electronic devices is protected by this law, which means that attempting to modify or repair this software could constitute a copyright violation. As more and more devices become embedded with software, the grip of this legislation tightens over objects we long thought of as our own. Not only are consumers purchasing countless new devices over which they do not have full legal ownership, but technology companies frequently design these models to require upgrade and replacement frequently so that consumers must continue to purchase new goods.

Matt Zieminski, who works for iFixit and Repair.org, explained to the Indy that Apple’s environmental guidelines state that their smartphones are expected to last three to four years. However, the batteries on the devices start to degrade after about two years, which causes the phones to slow down and prevents new operating systems from functioning properly. In December of last year, after news broke that Apple had been intentionally slowing older phones under the guise of software updates, the company decided to offer a discounted battery replacement to customers who had recently purchased their iPhones. Of course, to install such a replacement would require handing the phones over to Apple’s own repair team.

Eighteen states, including Massachusetts, have introduced legislation mandating a “right to repair” or “fair repair” for consumers. As Zieminski described to the Indy, “Remember that time that you dropped [your phone] in the ocean or … in the toilet at home by accident. Well guess what: despite what Apple may say, we can actually repair these things easily and cheaply, but it requires us to have access to information and tools the manufacturers won’t let us have right now.” Much of this new legislation would require manufacturers to release service and repair guidelines, so that consumers can repair their own devices, or take them to third party repair shops where mechanics will have the necessary expertise to make repairs. Wiens explains that the repair information which the legislation makes available would not threaten the privacy or security of devices, as it only requires manufacturers to provide enough information to make repairs. “There’s a big difference between repair information and engineering documentation,” Wiens told the Indy. “One is what the engineer in California has, and one is what the Apple Genius in Providence has.”

The movement is growing quickly. This time last year, only eight “right to repair” bills had been introduced in state legislatures: this number now stands at 18. However, the farmers, consumer advocates, local repair mechanics, and iFixit bloggers are fighting an uphill battle: large companies such as Apple, Nikon, Tesla, and John Deere have spent remarkable amounts of money lobbying against the popular legislation. Zieminski explains that advocating for legislation which will benefit most Americans, local businesses, and the environment remains extremely challenging when the legislation’s critics have immense funding and political power. “It costs about $60,000 to pay for a good lobbyist to go and fight in a state for this bill. That’s a lot of money. Repair shops will certainly donate, and they have donated, but if you look at a consumer, they’re not usually the ones to just throw money here and there. So how do you get the money and how do you fight these big corporations like Apple—they could just wait you out in court at that price.”

The digital “right to repair” legislation that was introduced in Massachusetts last year is expected to be reintroduced in the current legislative session. Wiens and Zieminski are optimistic about the legislation’s potential to pass, especially as the movement is seeing growing support nationally and pressure is increasing on large technology companies to allow consumers to regain ownership over their property. Few issues have united farmers in Nebraska, tech bloggers in California, and mechanics in Massachusetts. Repair and ownership have different meanings for different people: for farmers, “right to repair” legislation is a means to a livelihood and to keeping up with harvest cycles, while smartphone owners will be able to extend the lifespan of devices and maintain upkeep at lower prices. “You have every single citizen on one side of this issue, wanting it to happen. And you have entrenched companies with lots of money and lots of lobbyists on the other side,” Wiens told the Indy. The outcome of this struggle between Big Tech and everyone else will have significant implications for the rights of consumers in the digital era.

Julia Rock B’19 thinks more hackers should be farmers.