Grad Party and the queer storytelling of “Pretty Boy” 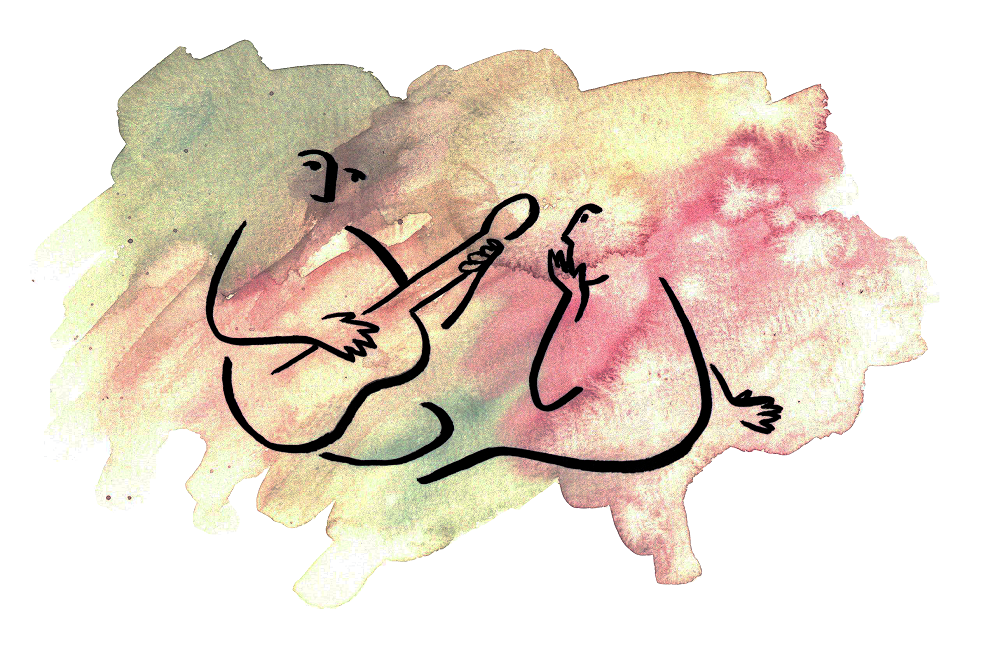 As a genre, the love song has a fraught history of reinforcing particular frameworks within the heterosexual matrix. The male singer-songwriter, subject and owner of feelings, sings about the female figure of his desire. In this time-honored tradition, the female figure becomes at once a muse for inspiring artistic expression and a vessel for emotion—in other words, the object of the male gaze. Even more innocent-seeming love songs, like the Beatles’ “I Saw Her Standing There,” explicitly center and are charged by the male gaze. But, of course, female and queer songwriters have always pushed back on this narrative, rewriting the terms of power in our own stories of intimacy. From Sappho to Frank Ocean, lyricists continue to find ways to restructure the gaze and what it can mean at the intersection of love-making and art-making. However, their structural inheritance is still defined by these power dynamics, to some extent. In Frank Ocean’s “Chanel,” he sings, “my guy pretty like a girl” and “can’t you see I am the big man,” positioning himself within this heteronormative framework even as he undermines it.

Many love stories begin with a glance across a crowded room, but some glances are riskier than others. The start of a queer love story is fraught with the politics of acceptance and coming out, even as new artists continue to expand the existing canon of queer love songs. Grad Party, first formed here in Providence last year, recently released a new single that explores these complicated aspects of queer romance within a simple narrative framework. “Pretty Boy” opens with an upbeat rhythm, but the lyrics feel hesitant as the speaker sets the scene: “Eyes across the room / you’re talking to her but I can’t help but think you sing a different tune / see I’m pretty sure that thing I felt, you felt it too…”

The question of being ‘out’ adds an extra layer to the song’s narrative almost immediately. This question of the other’s sexuality would be valid within a heterosexual dynamic, but it’s almost never asked. Straight love stories have the luxury of that assumption from the very beginning; the “glance across a crowded room” only has weight on the basis of individual judgment, and is unburdened by the question of sexuality. In this way, ‘straightness’ also underscores a privilege of straightforwardness. Grad Party, like Frank Ocean, subverts this tradition with lyrics that are at once straightforward and concerned with the unique vulnerabilities of queer romance.

Toward the end of “Pretty Boy,” vulnerability reenters the narrative. After a whole song about a mutual spark of attraction and keeping each other “warm at night,” a line of insecurity rises above the refrain: “I hope I’m right.” This vulnerability, a vulnerability inherent in the queer gaze, never quite goes away. Rather than resolving vulnerability, the song accepts vulnerability as a constitutive element of queer storytelling.

Grad Party made their start last winter in two rented rooms in a house on Power Street. Ian Bowers and Carlo Ladd, seniors at Brown at the time, wrote and recorded their first single, “Speak,” followed by their first EP. Now, having graduated, Bowers and Ladd are working together to pursue the project more seriously. Ladd told the College Hill Independent that he wrote “Pretty Boy” because he “wanted to write a poppy love song that was unmistakably gay.” Of course, the notion of queer representation in music is hardly new: Ladd sees Grad Party knowingly walking in the footsteps of artists such as SYD and Troye Sivan with this new single. However, he adds: “there still aren’t enough pop songs that communicate specifically queer romantic experiences.” Ladd explains: “I wanted to make my own contribution to that. The general public’s understanding of ‘gay’ music—and definitely my own, until I actively looked for queer pop—is often limited to empowerment anthems such as Macklemore’s ‘Same Love’ and Christina Aguilera’s ‘Beautiful,’ and while these are important, love songs normalizing gay romance are equally so.” Popular songs centering queerness tend to be more about asserting the right to exist than actual queer love. Lines like “born this way” come to mind, as well as “I can’t change even if I tried,” a sentiment centered in “Same Love.”

While the affirmation of identity is certainly valuable, there’s a lot more work to be done in telling actual narratives of queer love and attraction. Asserting humanity cannot and should not be the only acceptable goal for marginalized artists. That’s what makes “Pretty Boy” radical: it isn’t an anthem of empowerment, but a vulnerable expression of the hope for intimacy that at once occupies and subverts the traditional space of the love song. The song is primarily about a spark of attraction, a feeling of energy drawing two people together. “It’s dark but I can see the spark that’s you and me / it’s threatening a fire but we’re right where we need to be”—these lyrics could be about anyone. But as the song continues, it’s clear that this love story doesn’t have the privilege of simplicity or security: “Pretty boy, don’t you care what they think / if they care, I’ll keep you safe.” The risk of not only judgment, but also of physical violence, from the recurring “they” casts a shadow of realism over an otherwise lighthearted sentiment. The invocation of this omnipresent ‘they’ introduces a third-party gaze into what would otherwise be a dual space of the first-person speaker and the second-person “pretty boy.” As the song goes, before this ‘they’ encroaches, it “feels like just us around.” The imposition of societal judgment lingers somewhere in the background of every queer love story; we can’t fully escape the ‘they.’ This vulnerability is, as much queer pride, an integral part of the queer experience.

What does it mean to be unseen, or unheard? The phrase ‘unheard-of’ can refer to something rare in a positive way or, alternatively, to something so brazen as to be profane. But the importance of “Pretty Boy” is about more than queer representation in music. The problematic structure of the love song genre, where the male voice ‘woos’ a female object, cannot be entirely ignored, even in a same-gender setting. There is still the ‘I’ and the ‘you,’ the watcher and the watched. The vocal mirroring in “Pretty Boy” within the lines, “If you’ll be my boy tonight / I could be your boy tonight,” presents the potential for a mutual intimacy where neither partner is ‘objectified,’ and both have the subjective agency to want and be wanted at the same time.

And so the canon of love songs keeps expanding, charting many different courses of ways people can be close to each other. The traditional love song structure, after so many years of use, is mired in limited notions of what romance is. Queer artists reinvigorate this genre by using old tropes to new ends, embracing the challenge to represent expanding possibilities of what love can be.

ANNA HUNDERT B’18.5 thinks that Lorde was robbed at the Grammys.