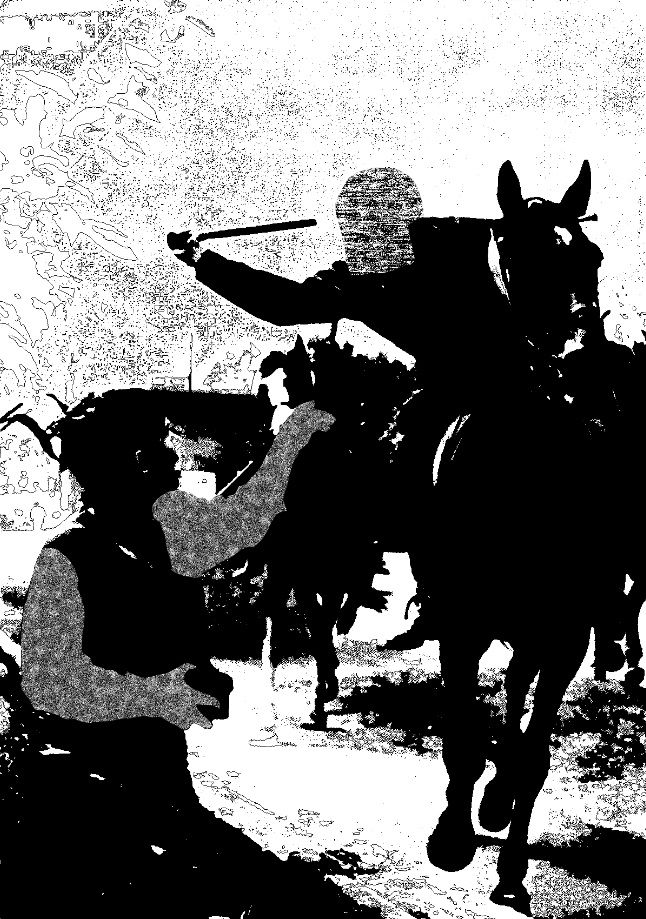 “The first task of the Magician in every ceremony is therefore to render his Circle absolutely impregnable.” – Aleister Crowley

Former U.K. Prime Minister Margaret Thatcher died on April 8, and the occasion to consider her ghost is nigh. The spirit of Thatcher animates many legacies, but one revenant (swirling, perhaps, with those of Nixon and Reagan) murmurs still that nations are built only of two things, markets and police. Markets sort out the dynamic components of the nation: changing preferences, diminishing resources, finding work. Police pin down the parts thought already to be stable: enforceability of debts and contracts, unified authority on judicial and political process, prevention of the impermissible.

An echo from the vortex: it is 1987, the year the Iron Lady is elected to her third and final term in Parliament as Prime Minister: “I think we’ve been through a period where too many people have been given to understand that if they have a problem, it’s the government’s job to cope with it. ‘I have a problem, I’ll get a grant.’ ‘I’m homeless, the government must house me.’ They’re casting their problem on society. And, you know, there is no such thing as society. There are individual men and women, and there are families. And no government can do anything except through people, and people must look to themselves first. It’s our duty to look after ourselves and then, also to look after our neighbor. People have got the entitlements too much in mind, without the obligations. There’s no such thing as entitlement, unless someone has first met an obligation.”

Every human community calls upon its own magic to produce truths out of uncertainty. In Thatcher’s time, as in our own, officialdom and police are crucial to the state magic whereby leaders’ views are realized throughout the land. Thatcher’s assumption that there is “no such thing as society” ran up against a few obstacles during her time as Prime Minister. Such situations called upon unwavering application of police power. Defiant assertions of the existence of society had to be snuffed out by the only unifying element Thatcher recognized, the police. Such was Thatcher’s response to the unrest in Northern Ireland, as well as to the idea that the miners and steelworkers who long toiled in state industries might reasonably be entitled to honest negotiations with their employer. The order Thatcher invoked brought record-high unemployment rates and inequality measures. Her tenure saw a near doubling of the portion of the citizenry in poverty. At the same time, it exorcised economic stagnation and drew renewed capital investment. Thatcher’s state magic quite effectively brought into being a market society, a nation of market participants fixed in that role by the insistent presence of the police.

An apparition, kensington town hall, 1976:
“It is clear that internal violence—and above all political terrorism—will continue to pose a major challenge to all Western societies, and that it may be exploited as an instrument by the Communists. We should seek close co-ordination between the police and security services of the [European] Community, and of NATO, in the battle against terrorism. The way that our own police have coped with recent terrorist incidents provides a splendid model for other forces.”

Thatcher was referring to terrorist incidents in Northern Ireland, where the Irish Republic Army violently asserted the region’s separation from Britain. The “splendid model” was the transition from military security forces composed of British soldiers to a newly-professionalized police consisting of people from Northern Ireland. The policy, deemed “Ulsterization” for the Northern Ireland province of Ulster, attempted to minimize the political costs of British deaths and allow the British-managed security regime to persist indefinitely.

What sense could a regional sovereignty struggle have within Thatcher’s individualistic vision? None—it could only be “internal violence,” an impermissible rupture of the state. These damaged individuals clotted into groups asserting a common identity. They even went so far as to claim that they were separate from the non-society of individuals. Under Ulsterization, the clot of group identity was broken up, and the bounds of individualistic society— the police—were redrawn using native bodies.

But some incarcerated bodies refused to be depoliticized. In 1981, jailed members of the Irish Republican Army demanded the status of prisoners-of-war and backed their claim with a seven-month hunger strike. Ten prisoners starved themselves to death, even though many who died faced sentences under 15 years. That such an act defies individual rationality left Thatcher unconvinced that something broader was at work. Her response to the deaths was unwavering: “Crime is crime is crime. It is not political.”

Notes from a 1984 speech, during fourth year as Prime Minister:

In Britain, too, the integrity of Thatcher’s order was threatened. By the late 1970s, while Thatcher was Leader of the Opposition and on her way to becoming PM, nationalized industries like coal and steel were operating at consistent losses. Thatcher brought the government in line with the rules of the market, closing steel plants and coal mines, often the major employer in the depressed areas where they operated.

John Stalker, then-Deputy Chief Constable of Greater Manchester, wrote in the Daily Mirror on Thatcher during the miners’ struggle: “Britain has never been closer to becoming a police state than when Margaret Thatcher was in charge... I saw at first hand how her authoritarian policies could have permanently shattered the bond of trust between the police and the people. She turned the police into a paramilitary force and put us on to a war footing...That was never more clear than during the miner’s strike in 1984.”

In the face of mine closures that would put tens of thousands of their number out of work—some announced only 5 weeks before taking effect—unionized miners
went on strike across Britain. They did so, though, with a measure of civility: because completely cutting off the supply of coal to steel plants would damage the steelworks, picketers compromised to allow a minimum amount of coal to reach steel plants. But when the strikers learned that more coal than agreed upon was reaching the plants, they intervened to try to block the deliveries.

On 18 June, 1984, at a steel precursor plant in Orgreave, Yorkshire, 5,000 to 6,000 picketers attempted to force the closure of the plant by preventing a coal delivery. They were met by 8,000 police from surrounding counties, armed and armored for combat with rioters. The picketers hurled stones and invectives, and as the delivery neared the plant, they rushed forward to try to block it. Their charges were hopeless, and, again and again, they were beaten back and dispersed.

Towards the end of the day, which came to be known as the Battle of Orgreave, police cavalry, at some unknown stimulation, charged the remaining picketers. More than 50 were injured and over 90 arrested. The charge gave rise to one of the miners’ strike’s classic photographs: a mounted policeman is caught mid-swing, his baton traveling directly towards a photographer’s head.

Following her corporeal demise, Thatcher’s ghost has undergone some contortions. Last week (as Rick Salame explains in this issue’s Week in Review, “Ring the Bells Out (Briefly)”) the market society voiced discontent, with thousands of purchases launching the 70-year old “DingDong! The Witch is Dead” to this week’s top singles charts.

Deciding whether to intervene as an officer of good taste and keep the song from the airwaves, BBC Radio 1 controller Ben Cooper said, “To ban the record from our airwaves completely would risk giving the campaign the oxygen of further publicity and might inflame an already delicate situation.” He was likely animated by Thatcher’s wayward spirit, his words the living return of Thatcher’s own. From a 1985 speech justifying a radio ban on Irish independence agitation: “We must try to find ways to starve the terrorist and the hijacker of the oxygen of publicity on which they depend.”

Perhaps her ghost has simply grown milder, today’s stakes lower than those under which she governed. In her memoirs, Thatcher describes a strain of political dissent posing an existential threat to the nation, writing of the “Hard Left”: “They were revolutionaries who sought to impose a Marxist system on Britain, whatever the means and whatever the cost... [they] wanted to defy the law of the land in order to defy the laws of economics. They failed.” Her unearthed legacy may boast more successes than the “Marxists” she disdained, but Thatcher, too, was undeterred by the costs and means required for her own ideological imposition.

BENSON TUCKER B’13, too, is part of the phantasmagoria.