A Ghoulish Passage from Lesser to Greater Perfection


After attending TransWorld Halloween & Attractions Show in St. Louis Missouri, my life’s project was completed and I attained perfection. There is nothing left for me to strive for. I am perfect/complete.

If you remember me in a less than perfect state, that is an old memory, because attending this industry-only trade show for haunted house-related products so ennobled my faculties of reason and enlarged my powers of apprehension, so satisfied my libidinal hankerings and smoothed out my psychic knots that I left the convention hall utterly whole, perfect, and complete.

And so now—clear-headed, mind, body, and soul freed from the yoke of the ruling passions—I will proceed to recount, with ghoulish aplomb, details of the event which is at last seasonally appropriate to write about. 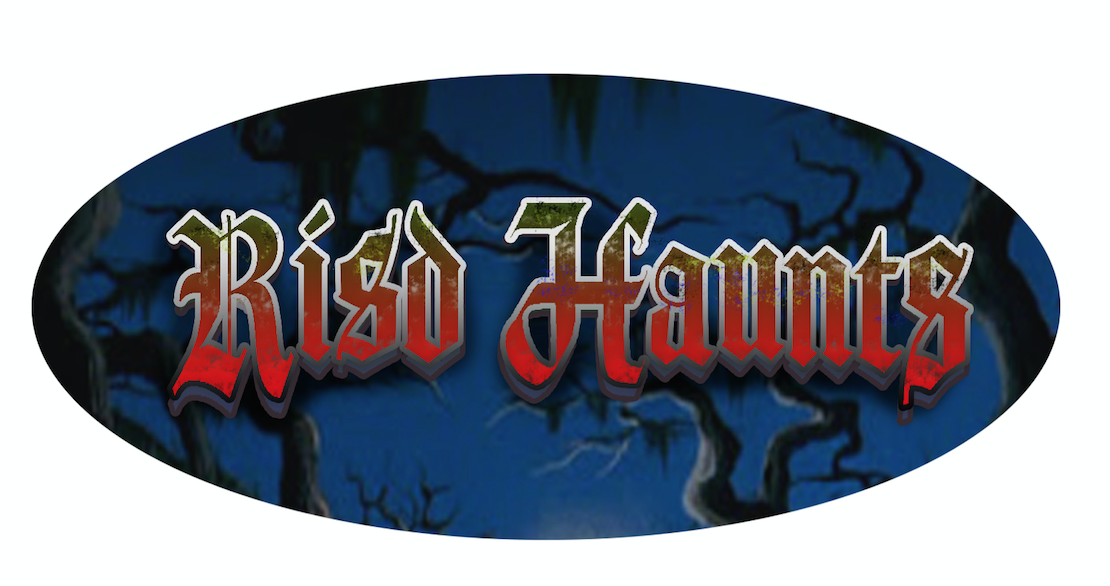 If you’ve RSVP’d to one or more of their warehouse raves, take a long walk in the spooky forest and bury your molly in an unmarked grave because “RISD HAUNTS” never existed. The enterprise is entirely fictional, devised by (special guest star) Jonah Max and I in order to negotiate around TransWorld’s strict pro-haunted-house-owners-only attendance policy. With the the invention of “RISD HAUNTS” and subsequent branding efforts, (as well as my legitimate receipt for a $769 clown autopsy prop, long story) we were able to qualify as “buyers” in the online ticket application, gaining full access to the TransWorld bargaining floor.
At the admissions booth, along with our Froggy Fog-branded lanyards, we were given ribbons stating “RISD HAUNTS”’s specialized subcategory: 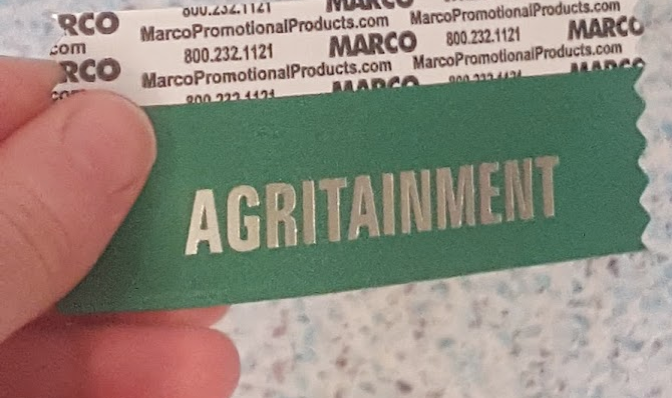 It’s difficult to convey the first impression of walking through the doors of TransWorld Halloween & Attractions Show. “Assault on the senses” and “feast for the senses” both fall short as descriptors. Perhaps senses are caught somewhere between the assaultive hunt and celebratory feast, and in this lacuna so much hissing of hydraulics, clanging of animatronically-rigged pots and pans, and popping out of sofa-sized zombie-horse puppet heads from behind a veil of fog-impregnated bubbles. 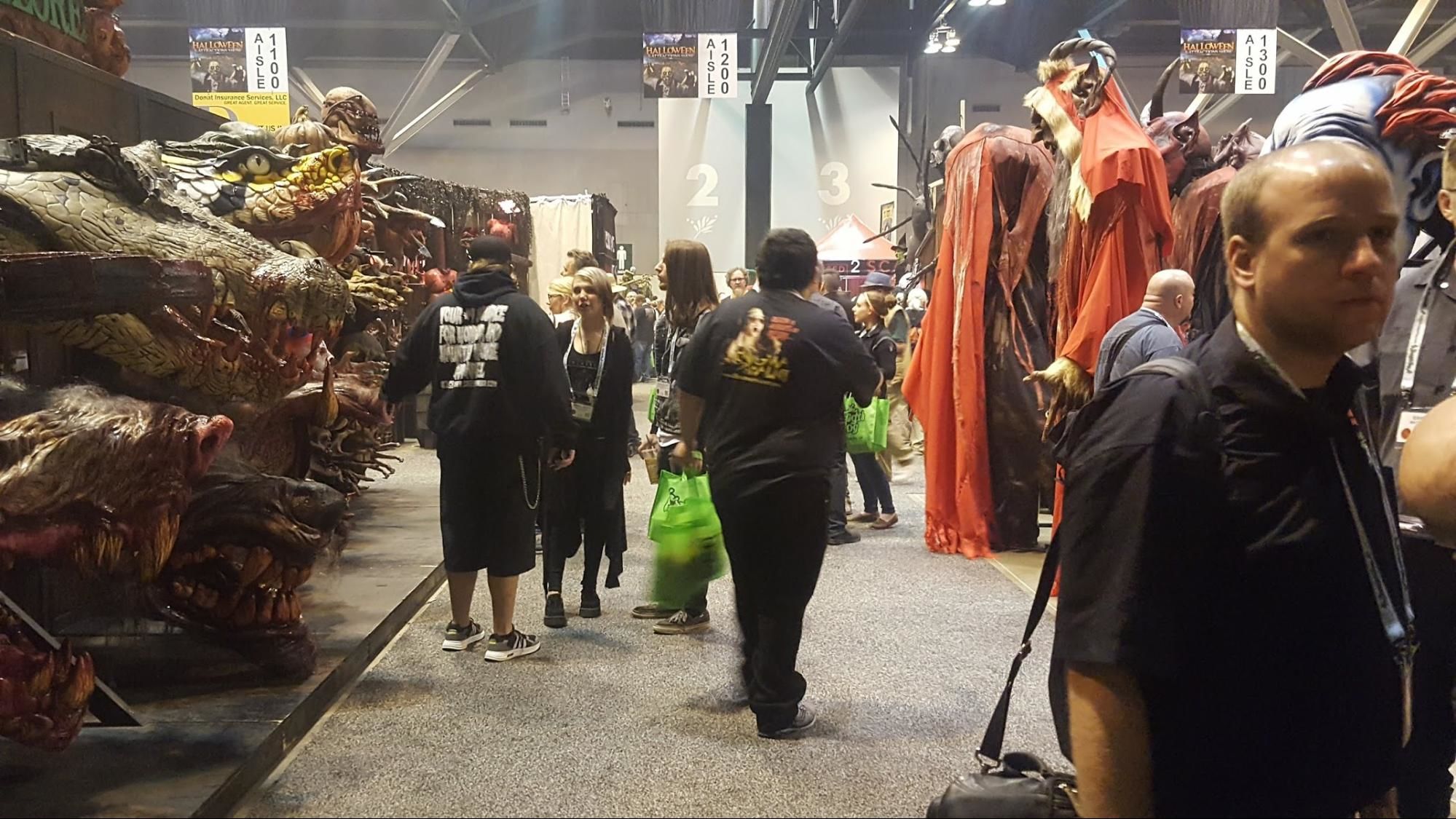 Jonah and I disband quickly after entering the gates, lost in the morass of stilt-mounted swamp-wraiths and hell-clowns.

The first thing I videotape are these rapturous figures, each hooked up to a motor, vibrating agreeably. These types of figures replace a haunted house employee and probably pay for themselves in the long term.  “Beauty will be convulsive or not be at all,” said some fucking asshole. 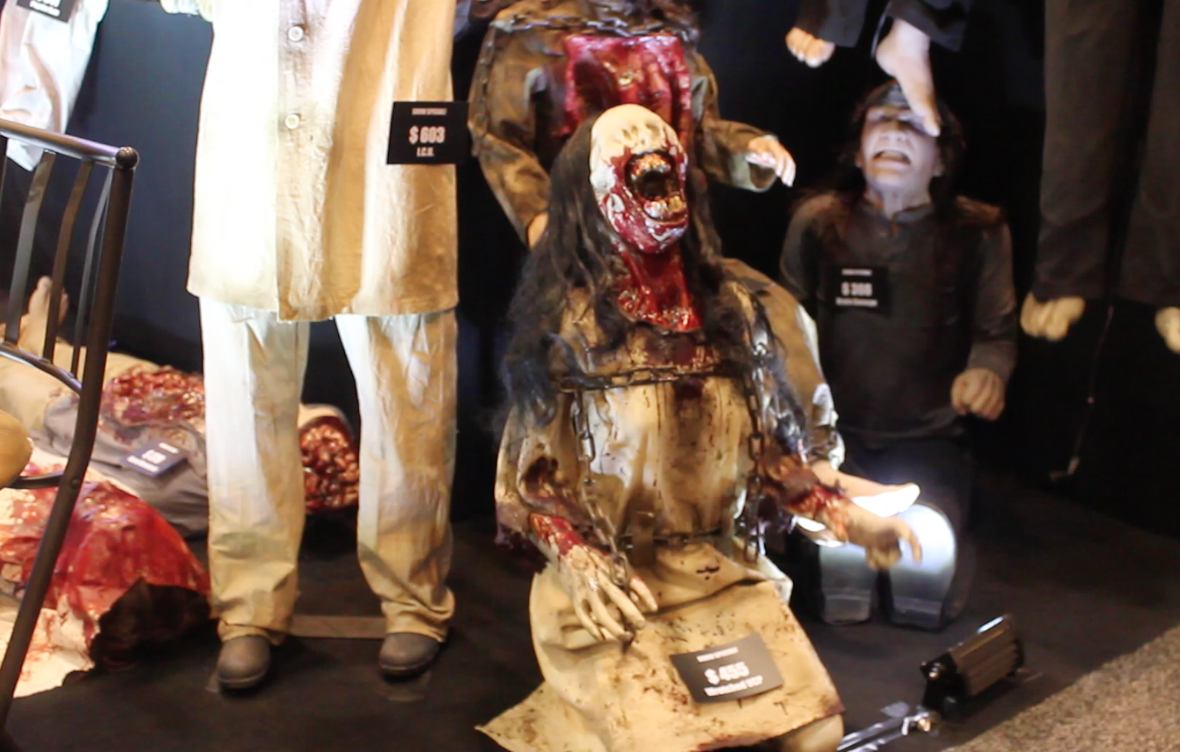 There are also live actors in a number of booths, wearing top hats and staging campy acts of dismemberment. 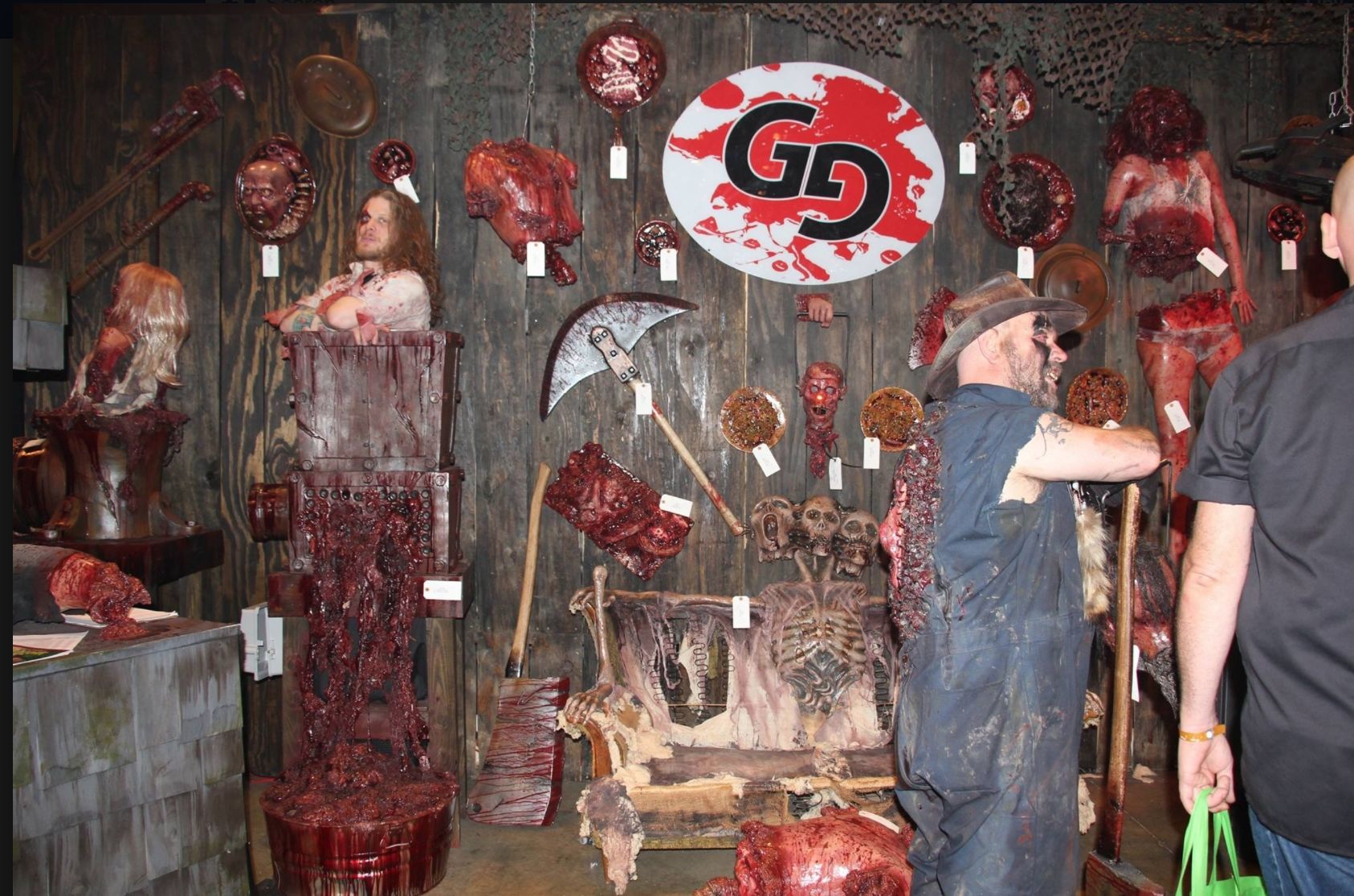 I am impressed by the monumental scale of the dark chateaus, Bates Motels and accursed lumber mills various companies have erected in the hangar for short-term display. 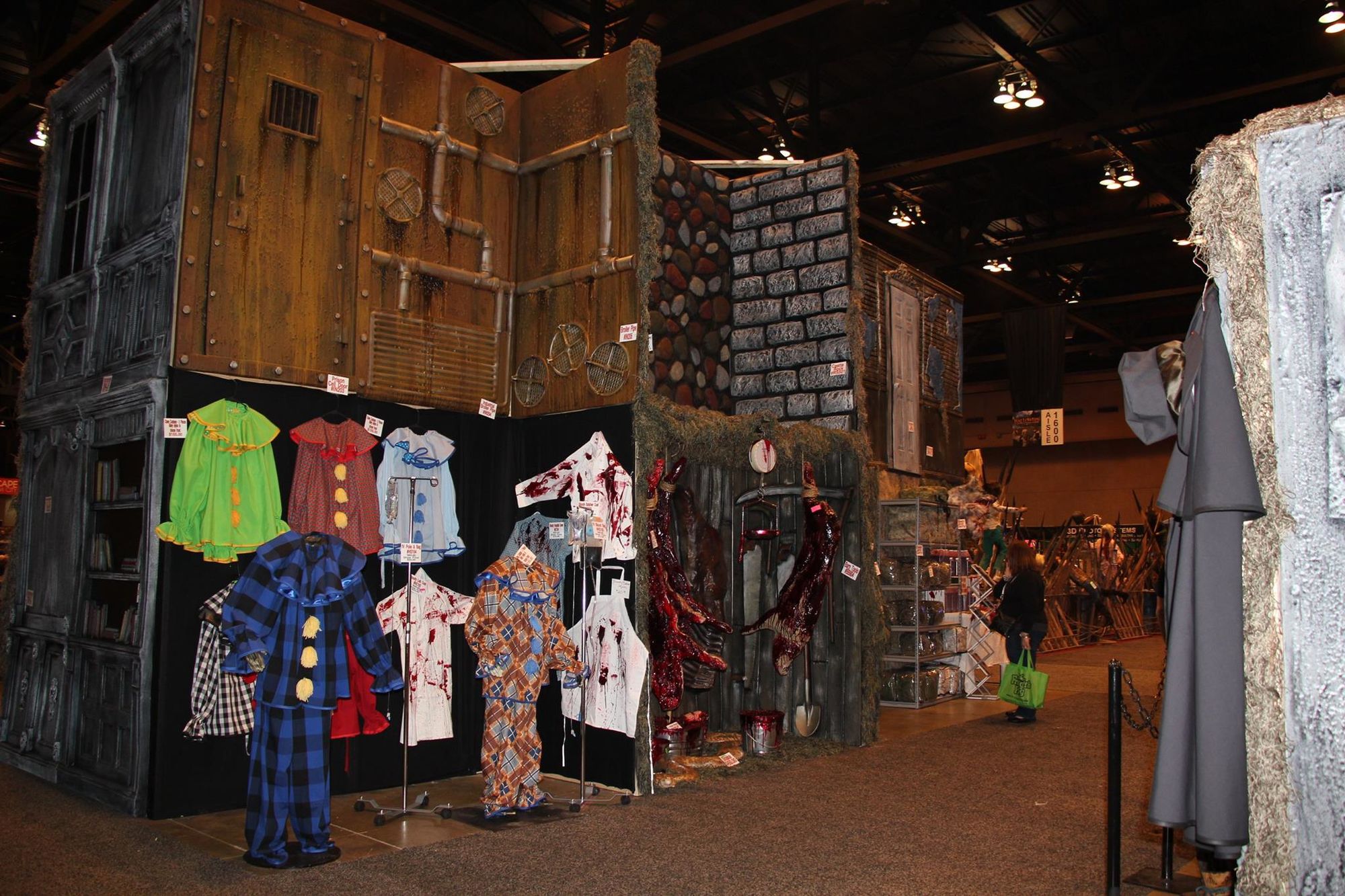 In terms of spatial navigation, the haunted house is an innately micromanaged format. Everyone goes through the same door and out the next in a one-way vector so that emotional responses can be carefully modulated and jumpscares correctly timed. Corridors are narrow to allow for the maximum number of twists and turns per square foot of floor space.

The convention hall, on the other hand, is designed to be as open and unpartitioned as possible, encouraging aimless drifting and free-associative modes of consumption. 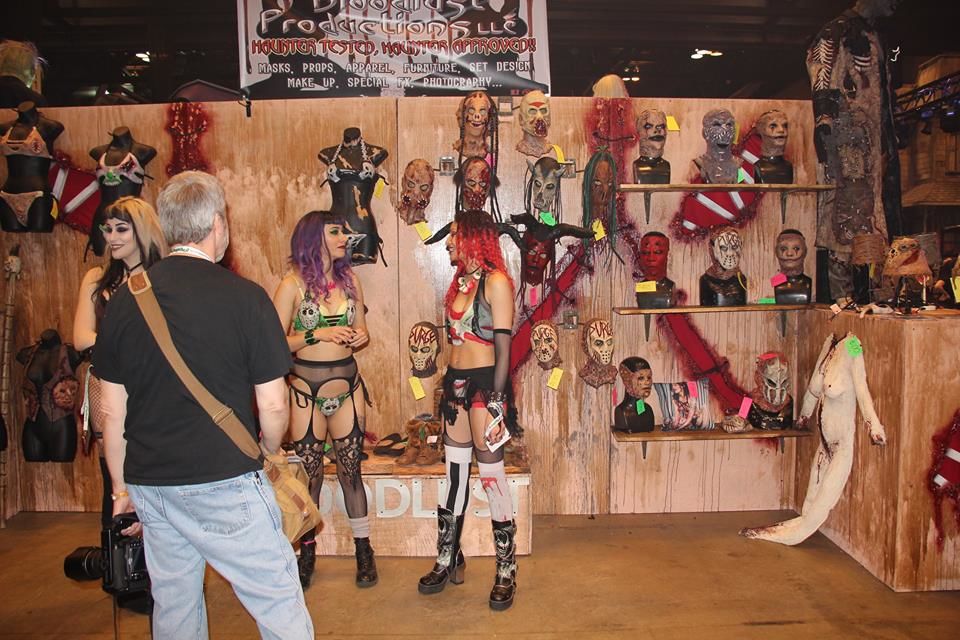 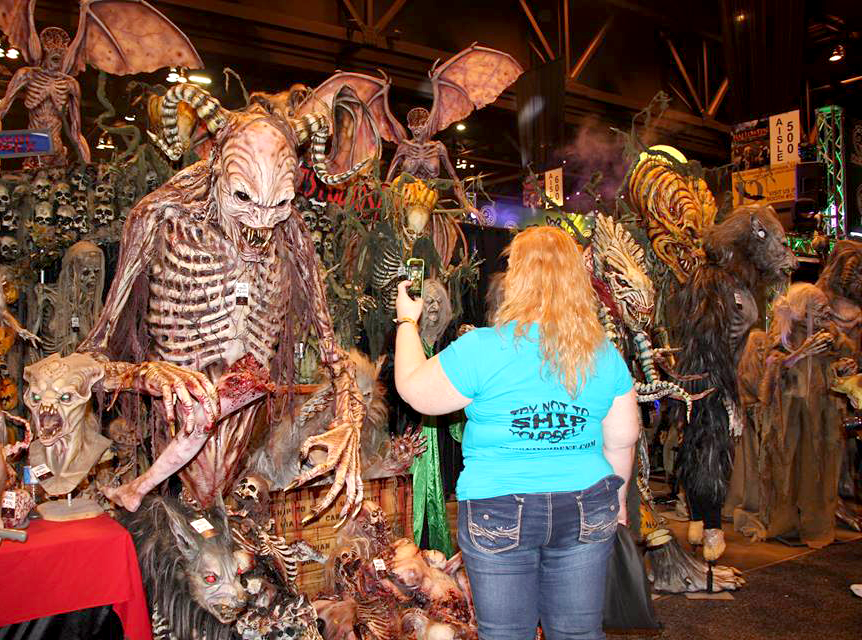 The distribution of booths does seem to conform to a general pattern, with the most technically accomplished props clustered by the door and more coagulated hot-glue blood sludge as you journey further out. A heavily fortified VIP lounge occupies the dead center of the hall. (Only those who sprung for the $310 VIP pass have access to the the inkjet printer and jar of cheese balls enshrouded therein.) 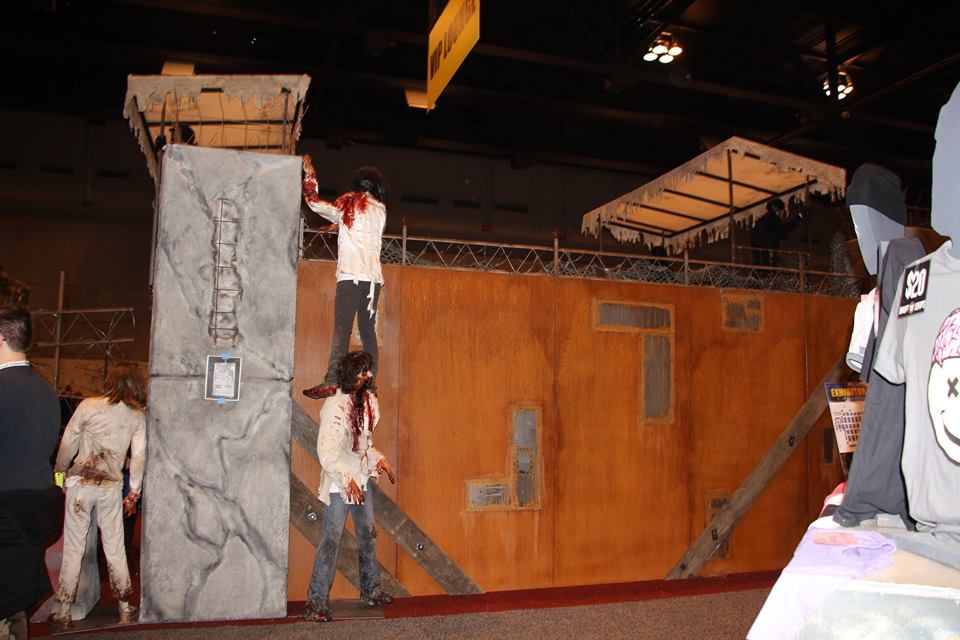 Beyond the lounge is a more spaced-out zombie paintball, VR app demo, and escape-room heavy area, tapering off into a Christmas inflatable no man’s land by the far perimeter.

But perhaps the most compelling area in TransWorld is the adjacent animatronics show room, the source of much of the clamor. The diverse array of automata are organized in a ring around a 50-foot-tall Diabolus with floodlight eyes. The effect is strikingly baroque, with the cabinet-popping banshees, demonic warthogs and hillbillies dunked in toxic waste all firing at various intervals, interweaving into some polyphonic suite of deranged robo-aggression. It works like a clock, basically—a clock that makes manifest all the pathological, violent kitsch our normal clock just barely conceals under its smooth white edifice. It’s all of the things Halloween is supposed to be about: the cycling of the seasons, the reaping, et cetera, and a rare triumph of death over the image of death. 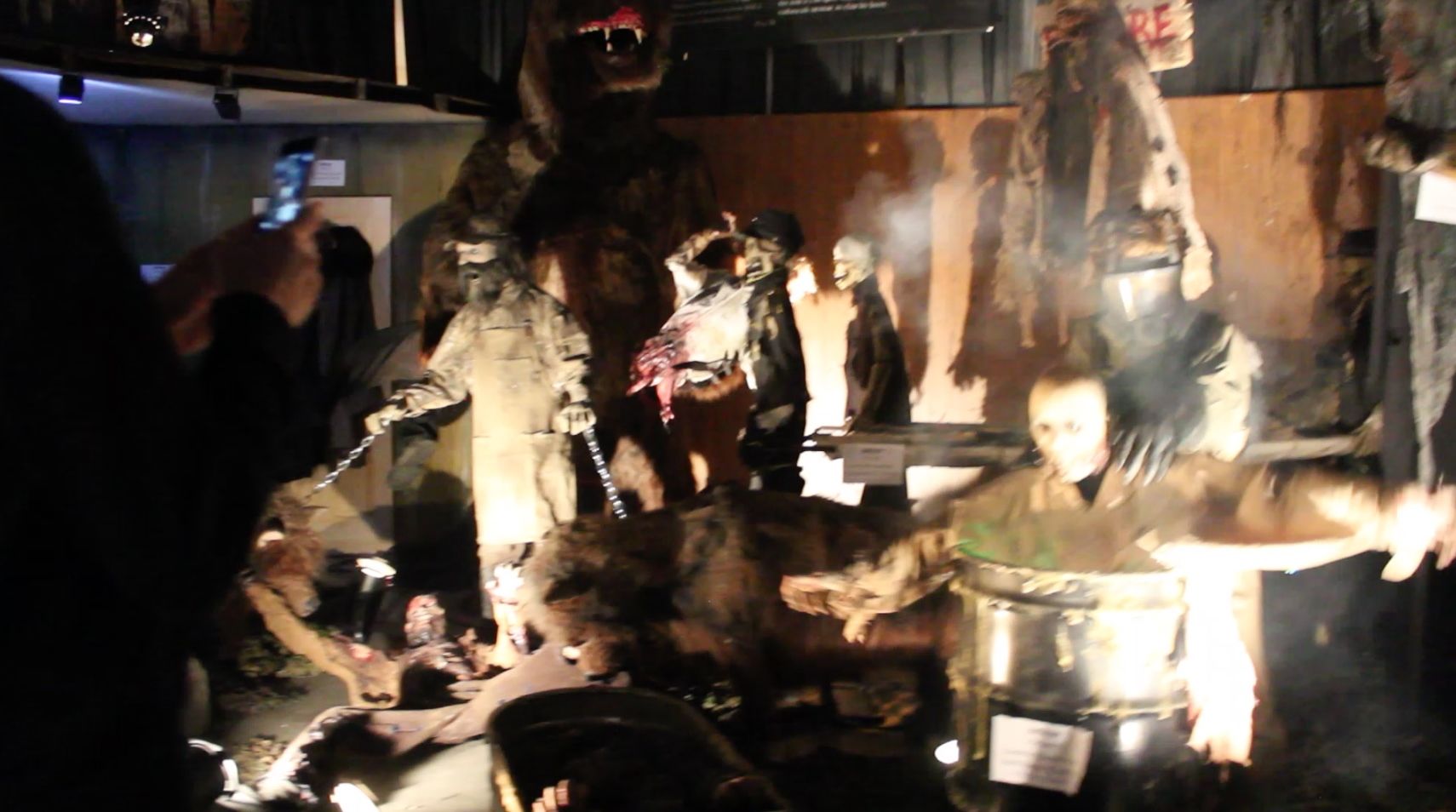 Unlike Providence’s Terror Con, at TransWorld horror franchise villains are few and far between. But nevertheless, the prop-makers seem to be working under creative constraints. There are a limited number of horror themed variables (or ‘gorephemes’) which TransWorld artists combine in various permutations. There seems to be no genre of monster (i.e. Frankenstein, Krampus, Slenderman), type of prop (loose limbs, weaponized fire hydrants) or surface treatment (glistening blood, soiled burlap) that isn’t echoed in the wares of least three separate vendors. And the mash-ups between these clichés prove just as exhaustive/exhausted. No limit to the number of creepy conventions prop and mask makers will layer into a single item in the desperate pursuit of novelty.

For example, the killer clown aesthetic is slapped on like just another coat of paint, leading to such contrivances as.. 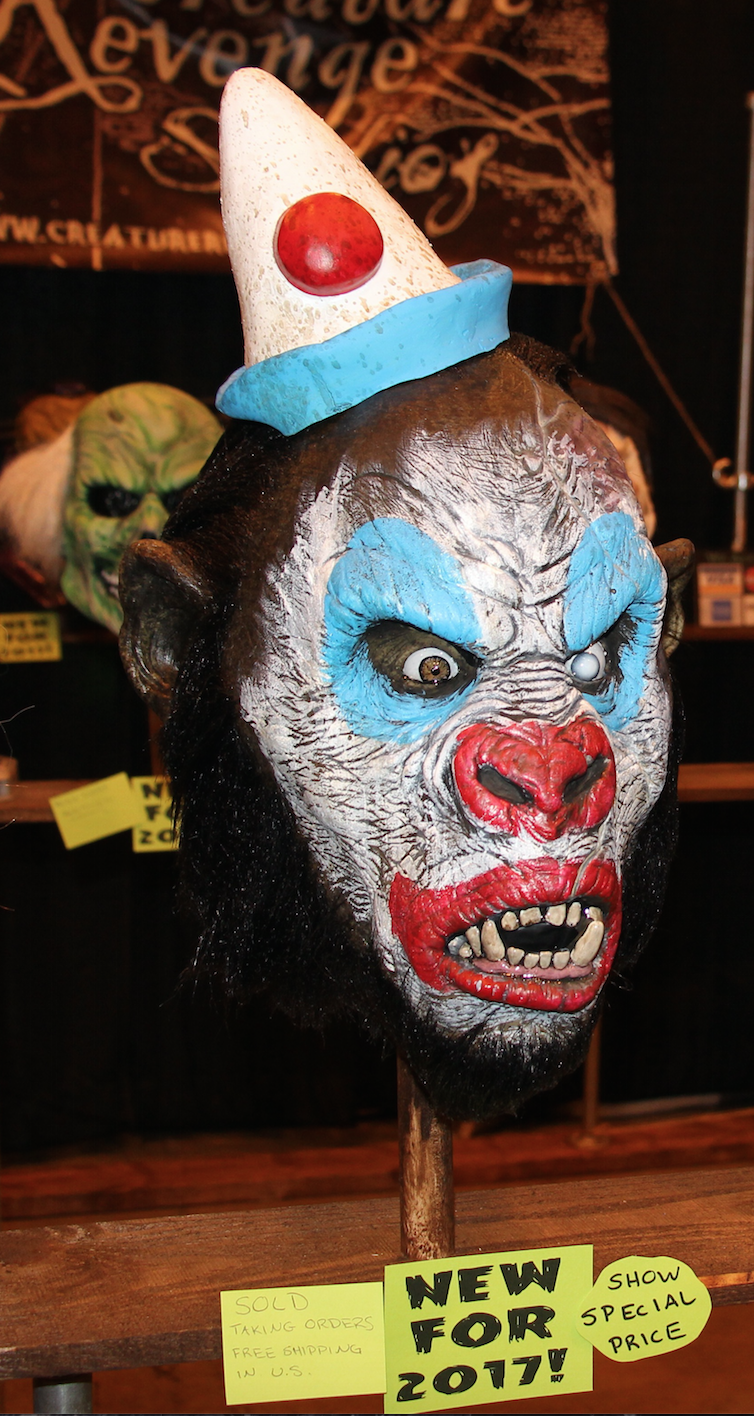 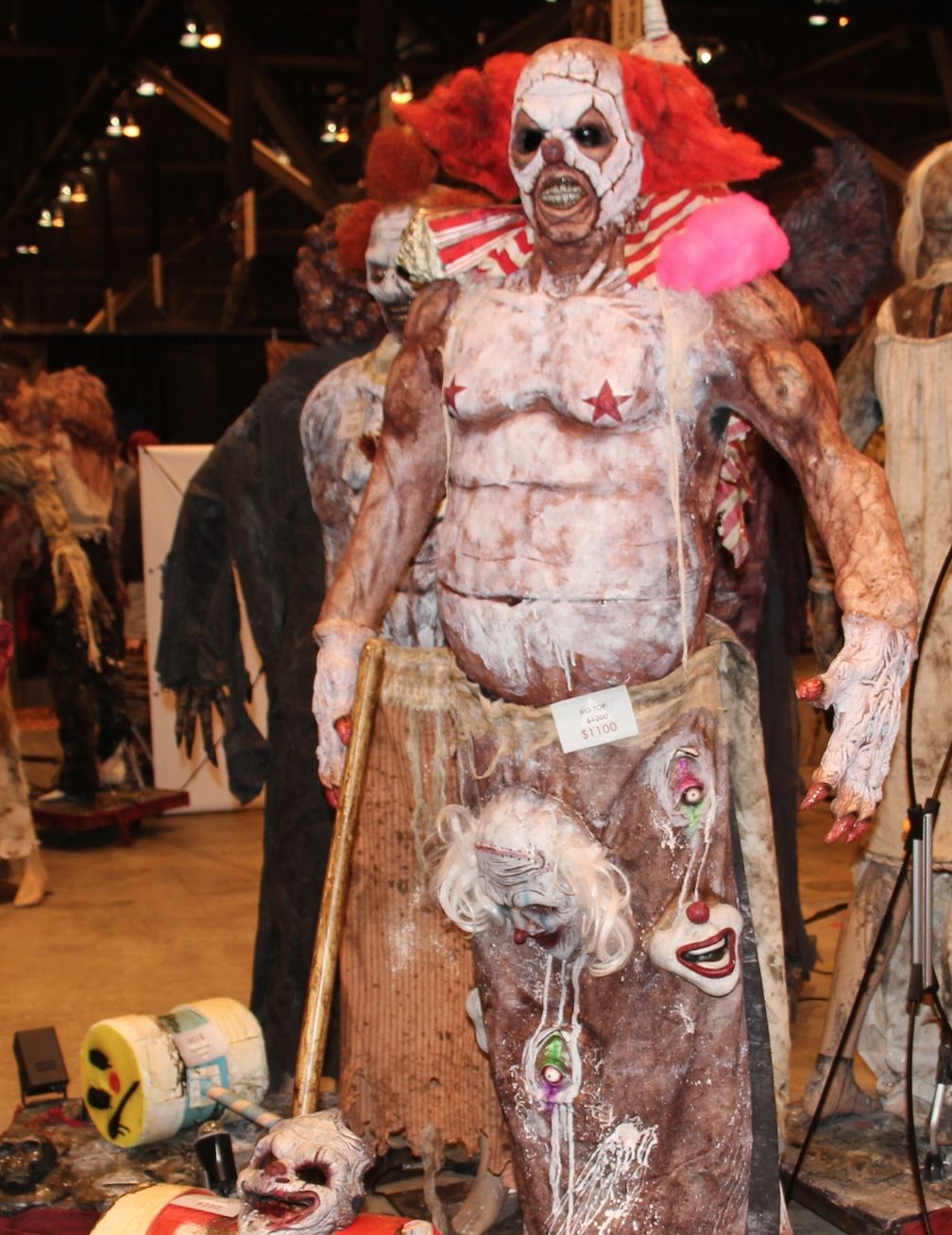 And the thriving subgenre of cannibalistic carnival food. 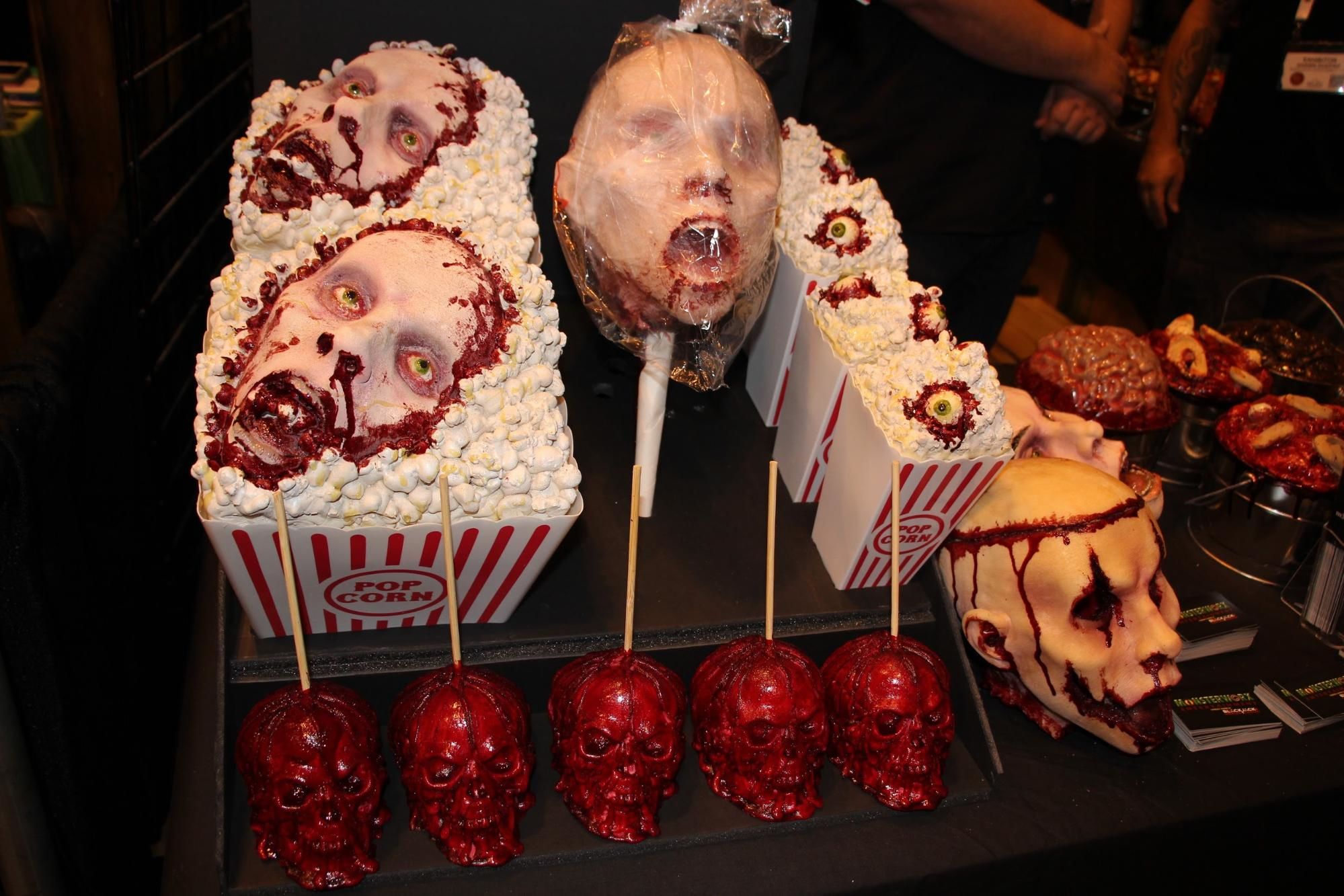 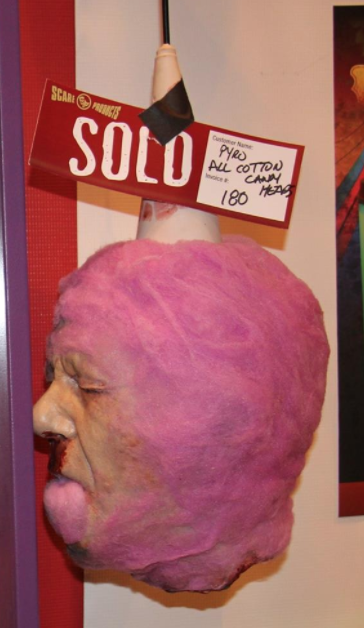 The Don’t Be A Monster Anti-Bullying Campaign Silent Auction is the haunted house industry’s attempt at community outreach.

I was actually hoping more vendors would try to embody real, contemporary threats... perhaps some ancient bacteria resuscitated from their frozen state due to global warming, or something.

The stand that came the closest to addressing topical fears was, unsurprisingly, Ghost Ride Production House. Ghost Ride is a company I’ve patronized on numerous occasions in the past, although I’ve grown to regret it. I was first drawn to their products’ incredibly convincing realism, with hand-punched hairs and hundred-layer airbrush paintjobs. But this same attention to detail can lead into very problematic terrain—elements like hair, clothing, and adornment situate Ghost Ride’s characters historically and socioeconomically, invoking real individuals in a deeply insensitive manner.

For example, today they’ve brought along a zombie Trump, a SWAT officer, a clown killed during a hostage situation, a chained woman with a tribal armband tattoo, a nuclear technician with plasmolyzed head and a twenty-something skater frozen to death in the snow among several hundred other products. Of the figures listed, the skater is the most personally upsetting to behold— his sneakers seem like they could’ve belonged to a friend. 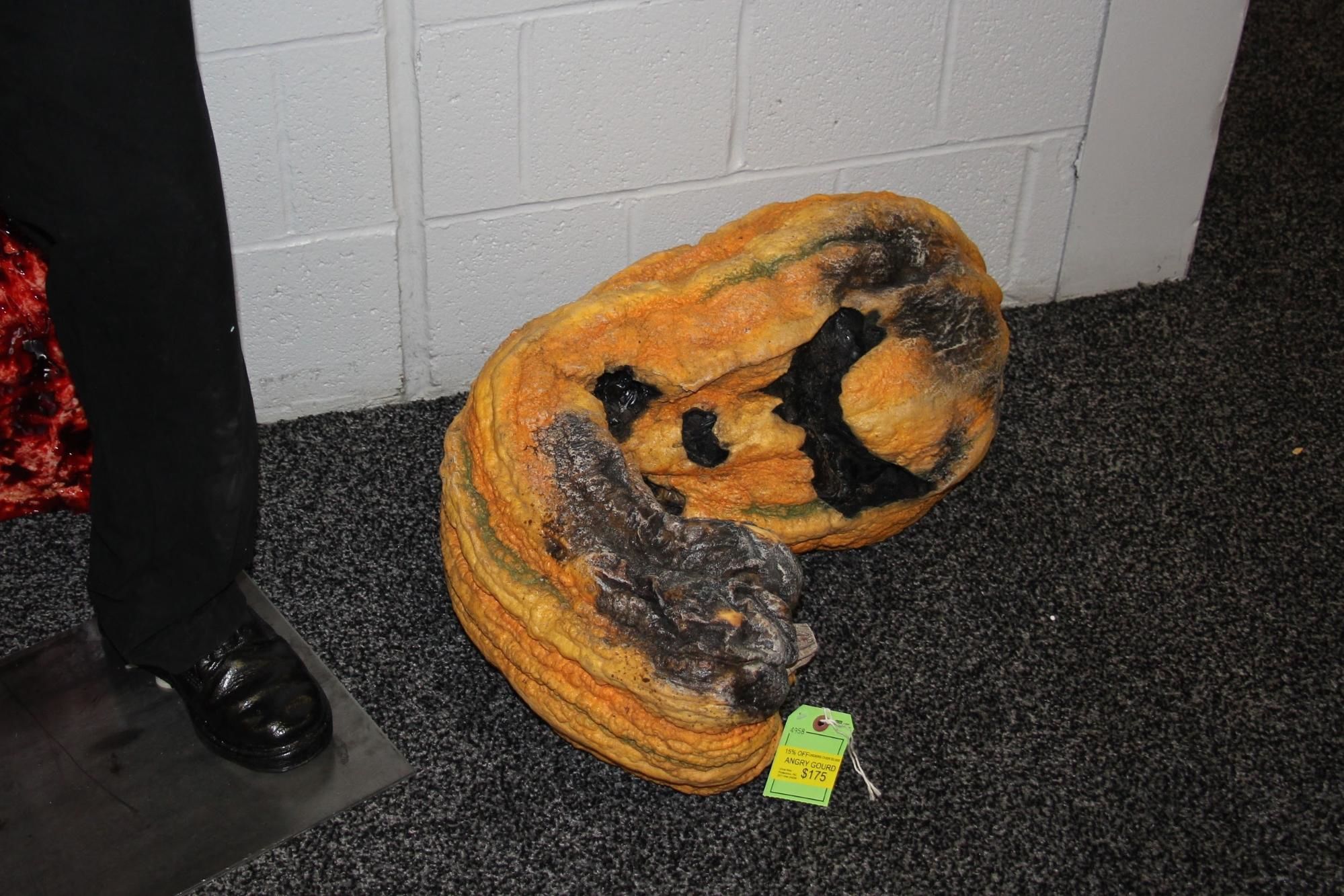 I can no longer take refuge in the abstraction of the gorepheme vernacular. A genuine cruelty has been shorn up here and I can’t stop looking at those Vans.

Now Jonah and I reconvene and have a few adventures in tandem. One adventure is sneaking into various seminars which give attendees insider tips and credits towards a Certified Haunted Attraction Operator Safety (CHAOS) certification. We go to one seminar on Pricing Rain Insurance for Haunted Houses. (Jonah really perks up for this one.) 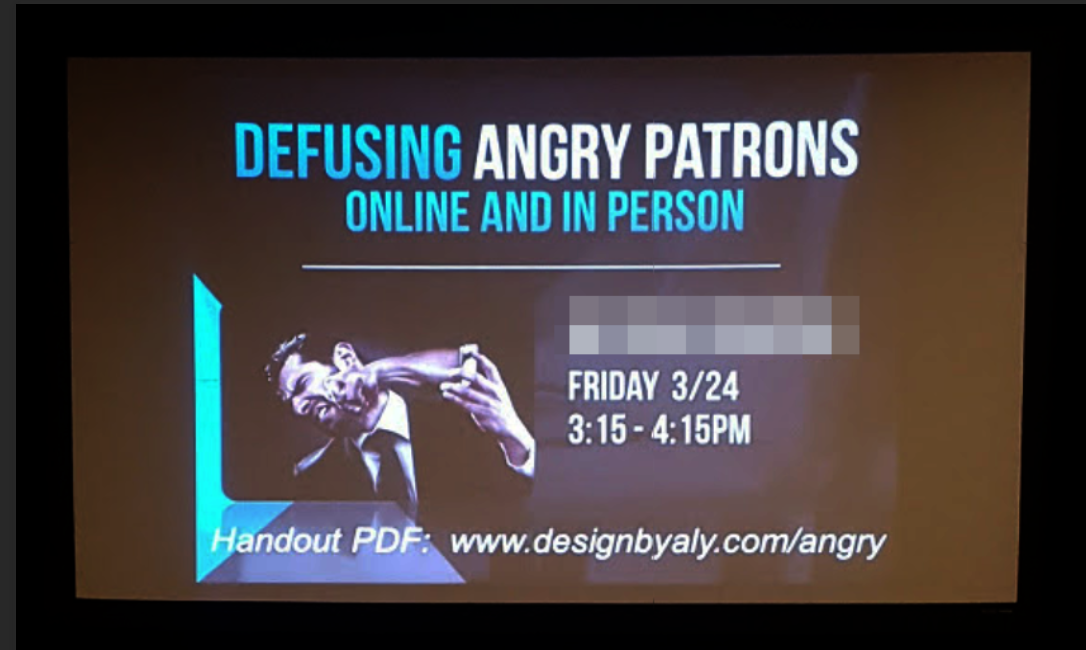 I am reminded of how attending a haunted house is often a very heteronormative date-night practice, in which scares facilitate physical contact between damsel in distress and male companion.

Another adventure with Jonah involves getting “Electric Chair” scent oil all over our hands, arms and clothes. I feel very guilty because I had insisted we smell the oils. I had no idea we would end up being anointed, but it is very unpleasant indeed. 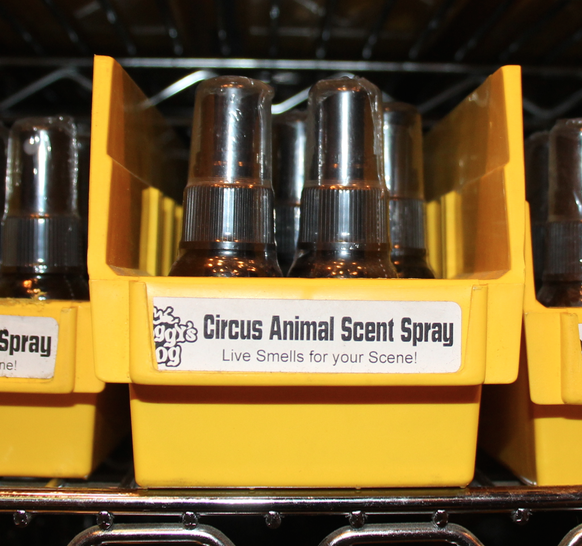 I could spin this log into a declamation of how pervasive commercial interests strangulate good old-fashioned Halloween fun, but my critique would get fed right back into the economic machine like last year’s candy. A pure Halloween is as impossible to conceive of as a pure death. Criticizing TransWorld along Marxist lines would be similar to criticizing the Scooby Doo live action movies for blaspheming the source material, when they were just following in the Hanna-Barbera bargain-basement animation tradition. My critique would be the Che Guevara tee to end all Che Guevara tees. So ultimately my final verdict on TransWorld is this: that it was fantastic, I had fun, and left perfected. 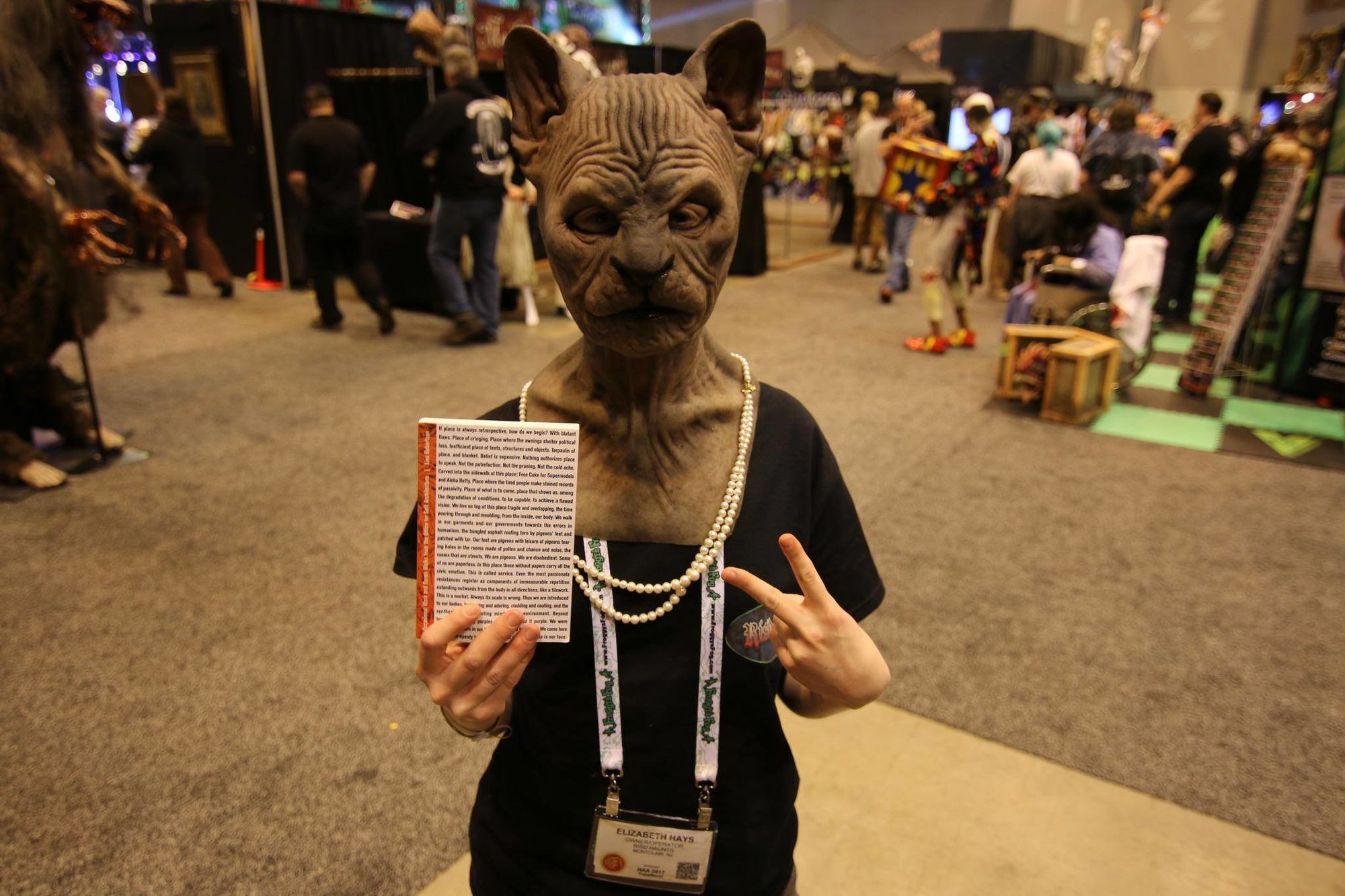 After our final day at TransWorld, Jonah and I head to the St. Louis Zoo. I remember thinking the animals’ fur wasn’t realistic enough, and that their personalities were too tropological and quaint. It reminds me of how I quit drugs because they made me see my life as too clean-cut of an allegory, and I prefer the frayed edge of a wraith.

LIBY HAYS B/RISD’19 is a droplet of glistening lymph.