One genealogy of state violence 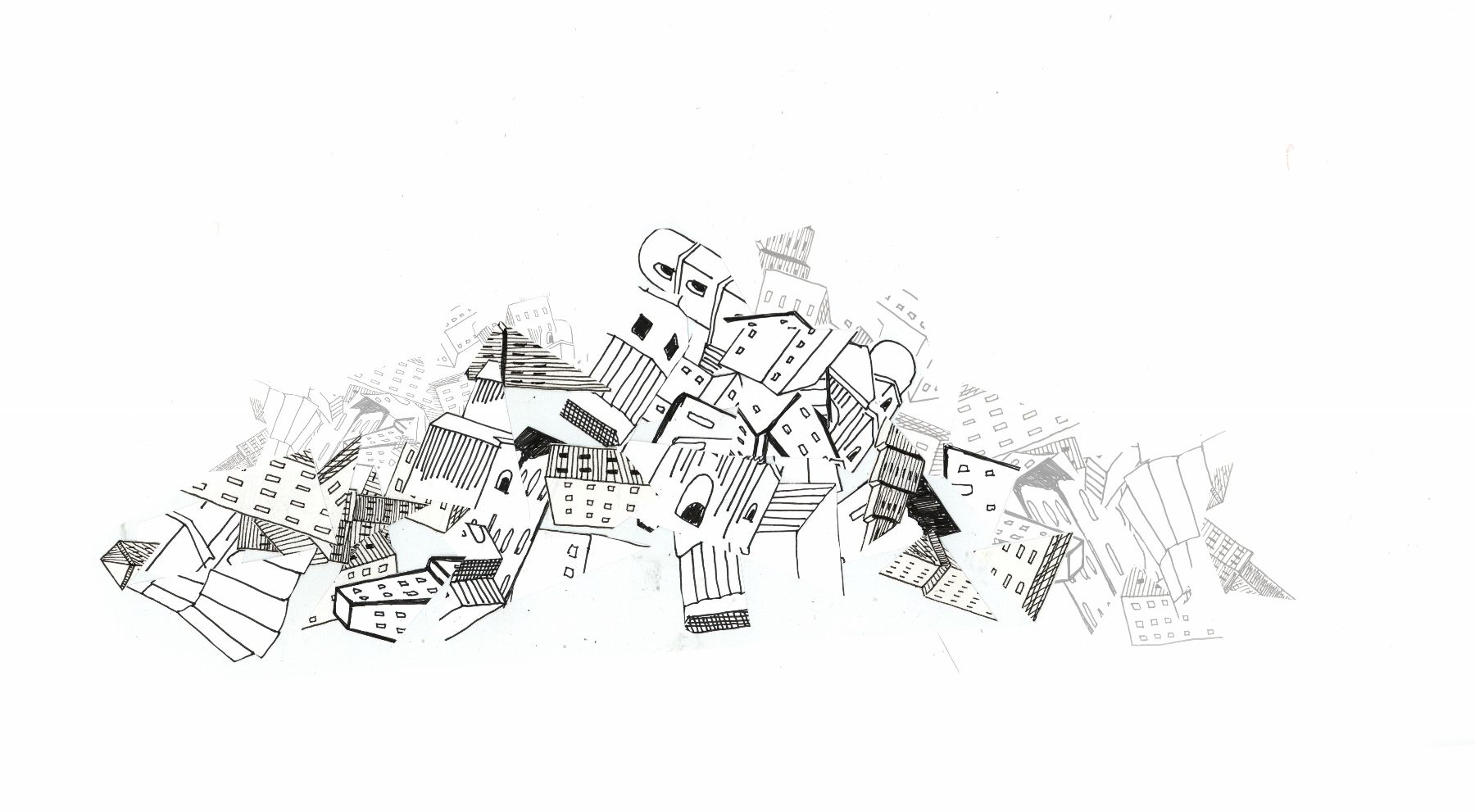 “To my daughter I will say, when men come, set yourself on fire.”

–Warsan Shire, Teaching My Mother How to Give Birth

“You have to be a murderous bastard to get that high up in the military.”

My father speaks, the crater scar on his left hand pulsing against the steering wheel. Seventeen years had to pass in our life together for him to fill the gaps of our family’s silence. We speak safely removed from our past realities, refuged in the dizzying buzz of nature in Western Pennsylvania. It is good place to forget, and to only hear of deaths on the kitchen phone.

I owe my existence to this murderous bastard. General Jose Maria A. He is my grandfather. He created my world as he fought for the end of many worlds. In the conflict that has raged in Colombia for the last 50 years, the US-backed Colombian army has fought against leftist guerrilla groups that were birthed by a long and painful history of fratricidal violence, corruption, repression, and instability. Other armed groups such as narco-traffickers, paramilitaries, and police forces have contributed to the pool of blood that has painted our rivers red. Farmers and indigenous peoples have been especially wounded by this war due to its dimension of land struggle. No armed group has shied away from corruption, rape, and brutal violations of human rights; the conflict shows a complete breakdown of our humanity that appears to have bound us in a cyclical state of hatred.

“They played soccer with a decapitated head,” my dad once told me. Who? It doesn’t matter anymore. At this moment there are no clashes.

How can reparations be given to the dead?

If there is something I have seen from this war it is the irreversible and deep mistrust it ingrains in our hearts. It is bad for our health. Some of my loved ones have been on the receiving side of violence. Others, like my grandfather, have been employed to commit it. They all heavily alarm and lock their doors like fortresses. They twitch, they ache, their blood flows as if escaping. My maternal grandmother is often visited by ghosts.

Grandfather, you are a myth. I have always known this. You wore crocodiles on your shirt and were saluted by everyone with palpable fear. You were trained in the art of violence by the school of the Americas. Your father died from complications of depression after his forced displacement; that’s when you became the Man.

All my grandfather has now to hold on to is the praise for his position. The brutality he became intimate with is honored. The gory nightmares are drowned down with a full belly and lulled to sleep in a nice apartment, government benefits, grandchildren in the US, and skin cancer from waging war under the sun.

In the theater of state brutality, both the victim and the perpetrator must be dehumanized. Without a doubt, the recipients of state brutality suffer in the cruelest and most prolonged manner. However, there is a secondary nightmare that falls upon the perpetrator. My grandfather released stresses of the war through keeping volent control over his household. He doesn’t speak of what he went through, or what he did.

I think of executioners coming home at night to their wives. I think of them at the moment they approve the execution, under the cross and the American flag. I think of gas chambers, electrocution, and firing squads, all still legal alongside the lethal injection in certain states.

There were times as a child when I liked to hold my grandfather’s dagger.

The Chicago Police Department released a video recently on its Facebook page titled “You Are Not Alone,” spreading awareness for the high rate of suicide amongst police officers. The video explains how police officers suffer higher suicide rates than the US national average. It shows clips of different sources of suffering from police officers, from dissatisfied partners and landlords to protesters calling them pigs. The most violent and striking image of this video is a Black woman weeping at the death of her child presumably by the hands of police or an incident involving policing. The rhetoric in this video was violently anti-Black, misleading and manipulative. Framing this woman’s devastation as something that contributed to the suicide of a police officer inverts and trivializes the effects of her trauma and the structural nature of police violence. Her suffering is exploited. Such a tactic is harmful propaganda especially in a city with one of the best funded police departments and high rates of police violence.

Ironically, in denouncing this distortion of the community’s trauma in order to boost the morale of police officers, it is evident that this video does not truly address the damages that this violent occupation causes upon the officers and their ways of life and families. For instance it does not address the fact that the rate of domestic violence in law enforcement families is four times the national average in the US. It is not trying to find the root. This is why I am reaching into the suppressed sufferings of my own grandfather, who has caused so much harm in the name of the state and of his honor. I recognize a similar phenomenon. I also recognize his pain.

In July, I came back to Colombia after almost a decade. I finally got to see my beloved  maternal grandfather Jaime again. In the central plaza of Bogota, he took me by the arm and showed me how the city broke into riots of April 9, 1948, the events that unleashed the civil war that General Jose Maria fought in. Walking on the old backbones of the city, his memory somehow stained every old building, and it moaned in their cracks. The dome of the church was a broken egg. “Half of it was just gone,” he said.

Many years after the riots, my grandfather Jaime’s home was broken into by robbers in collaboration with the police. He and his wife, who was suffering from severe arthritis at the time, were tied up and placed against the floor with guns, as well as their sons and daughters and their little grandchildren. It is funny, how if the war didn’t kill them, maybe the aftermath could have. This event was not shocking to them, but rather a confirmation that in violent circumstances, these events are expected, as there are no standards, as everything is degraded, as anyone could be your next attacker. Their small shoe factory was eventually extorted to its end. They live in constant paranoia. I’ve left them behind while they were in this state.

When my father told me about my grandfather I felt a cold, bitter resentment. I feel it everyday in the black coffee my father drinks at four in the morning.

The riots which erupted in 1948 were Jose Maria’s blood inauguration. A young soldier’s first battle kill. He was around the age I was a few years after my first period. He was to guard a Catholic school in the central plaza called Colegio Mayor de San Bartolome from the liberals, the rioters, the rebels who were destroying the Bogota after the murder of presidential candidate Jorge Eliecer Gaitan. The nuns cleaned the soldier’s spears with their white curtains. White curtains turned pink.

There were times when the Orinoco River flowed pink from all the bodies dumped into it.

He abused and beat his kids when he’d get home from his missions. He’d turn on his wife too. Made everyone turn on each other, ready and lined up at the door to turn each other in for their sins before this fearful master. He softened up at the birth of his first granddaughter, born of the son he almost beat to death. Her cheeks glowed pink.

Yet he could not protect her from future violence that would come her way, histories of sexual violence which are hushed and not mentioned in our families. He, at 75 years old, screamed at my tiny mother over trivial issues during his visit to the US. Those screams were not about the way she was raising me at all. They were a learned, primal growl from the bellows of his discontent.

“BOGOTA, Colombia, June 29—The acting commander of the Colombian Army, Gen. Jose Maria Arbelaez C____, said today that security forces had neutralized leftist guerrillas in the southwest of the country.

Speaking to journalists, General Arbelaez said troops were in control in the jungle department of Caqueta where the largest guerrilla force, the Revolutionary Armed Forces of Colombia, had been most active.

‘At this moment there are no clashes,’ he said.”

That is all he has ever said. His saddest poem.

MCAS has killed many flies.