Behind the Bag Ban

A look at reusing and recycling in RI environmental policy 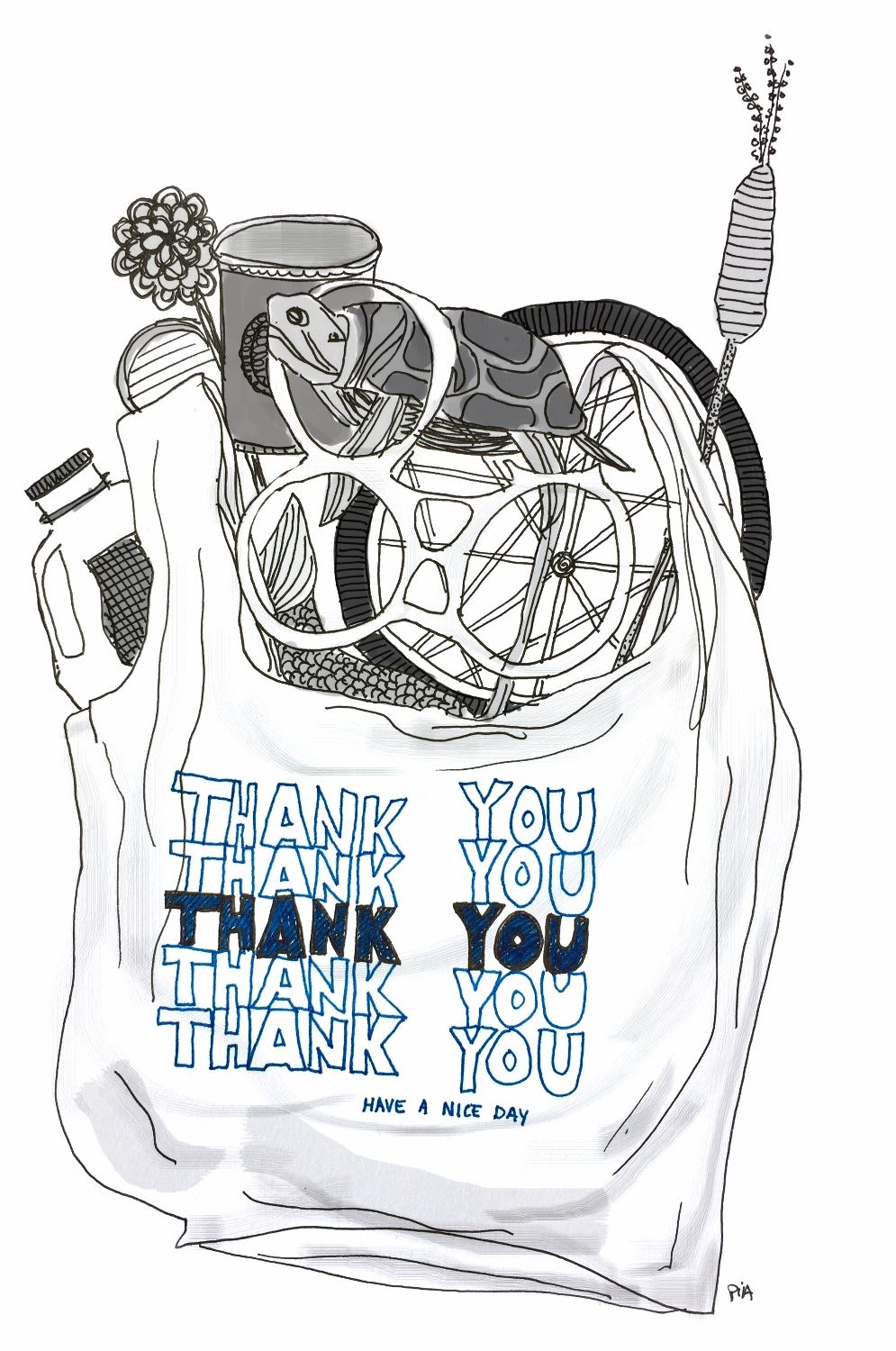 This past spring, two communities in Rhode Island, Newport and Middletown, banned single-use plastic bags. Both bans were passed unanimously by local city councils, both will go into effect on November 1, 2017, and both were met with almost no resistance from residents. Marine health is an incredibly important issue for both of these seaside communities, and across the Ocean State. However, as similar bills have failed on the state-level, smaller legislatures are now stepping up and taking on the responsibility of environmental stewardship. In spite of their intentions, the consequences of these bag bans for Rhode Island ecosystems are not straightforward.

The Clean Ocean Access (COA), a non-profit based out of Aquidneck Island, has organized hundreds of beach cleanups around the area, gathering thousands of pounds of ocean debris since 2006. COA was also behind the legislation in both Newport and Middletown, led by co-founder and executive director Dave McLaughlin. “It’s an island-wide attempt to remove bags from retail,” he told the Independent. By removing bags from retailers, COA hopes to reduce the amount of plastic bags and other materials that end up in the ocean and Narragansett Bay.
The movement to institute the ban began on Change.org in the fall of 2016 with a petition initiated by the COA calling on the city of Newport and the towns of Middletown and Portsmouth, both located on Aquidneck Island, to change their policies. In response to the petition, which ultimately gained over 1,000 signatures, the Middletown and Portsmouth city councils initiated public hearings and legislation to address single-use plastic bags. McLaughlin spoke at the hearings in both Newport and Middletown this past spring. His data-driven plea, emphasizing that the COA has removed more than 94,000 pounds of debris over the last 10 years, played a large part in illuminating just how serious a problem this is for the local ecosystem.

After the hearings, Newport’s city council passed the legislation with almost no opposition. Councilman John Florez, who introduced the resolution for the bag ban, told the Indy, “We have a tourist driven economy, and having clean waters is a critical part to our ocean economy.” Local retailers rely heavily on tourism, fishing, and sailing for their business, so a law that could help preserve the ocean ecosystem would be in their favor, despite the burden of transitioning away from single-use  bags.

Single-use plastic bags have a wide-range of environmental impacts associated with their production and consumption. Plastic bags are made from long chains of hydrocarbons which are made from petroleum and other crude oils and natural gases. Some estimates claim that over 12 million barrels of oil are used to produce the 100 billion plastic bags used in the US each year.

The images that we most commonly see of plastics in the ocean are those of sea turtles and birds entangled in six-pack rings, but those pictures only tell part of the story. Plastics that end up in the ocean frequently damage ecosystems or release toxins and oils into the water as they break down. Depending on the type of plastic, the temperature of the water, and the amount of direct UV exposure, debris can take anywhere between one year and 100 years to break down, without ever fully degrading; they split repeatedly into microplastics, releasing toxins and chemicals as they degrade. Once these microplastics and the chemicals they release are ingested by sea creatures, they not only damage the individual animal’s health, but also enter the food chain, affecting subsequent trophic levels for years to come. Given the widespread recognition that plastics are toxic when released into the environment, when the citizens of Newport and Middletown were presented with legislation for a bag ban, they leapt at the opportunity to be better environmental stewards. However, the bag ban might not be the only way, or the best way, for those citizens to support the environment in the way they hope to.

In an investigative report conducted in 2011, Le Journal de Montreal delved into the impacts of single-use versus reusable bags. Despite reducing the number of single-use plastic bags in circulation, the newspaper found that reusable bags were not as eco-friendly as was commonly thought. Reusable bags are often made from cloth and durable plastics, both of which are not recyclable. Even though an individual may use a reusable bag for around five years, that bag will end up in a landfill for decades after its use. The report also found that among the store-brand reusable bags tested, four tested positive for toxic levels of lead. Once a reusable bag containing lead arrives in a landfill, the lead will be released over time and contaminate the soil. Unfortunately, single-use plastic bags jam the machines at standard recycling facilities. Given special facilities, however, they are efficiently recyclable.

While Rhode Island has a plastic bag recycling program—ReStore—it is not used by enough citizens to provide a wide-spread solution to plastic bags. There are bin locations at many larger grocery and big-box stores, and at the Material Recycling Facilities in Barrington, Westerly, and Woonsocket. But without the simplicity of curbside removal, ReStore does not see widespread use. Another problem is the obscure publicity for the program online. The Rhode Island Resource Recovery Corporation (RIRRC) website has exceedingly limited information, only telling visitors that plastic bags and films are “recycled through a special program called ReStore. You can find ReStore containers in large RI grocery, pharmacy, and big-box stores.” However, there seems to be no database of where these bins are located around the state, on how much plastic is recycled through ReStore, or any explanation of how the plastics are recycled.

The RIRRC was created by the Rhode Island state legislature in 1974, also known as the Rhode Island Resource Recovery Corporation Act. The corporation was created to manage the state’s municipal waste, and has been behind several key recycling initiates, including the first law making statewide recycling mandatory, RI Recycling Act 1986. It is telling that in the RIRRC's description of its history since 1974—which includes several other statewide recycling initiatives like the Recycle Together RI program, and local initiatives like the Maximum Recycling program, which was only prototyped in Foster and Scituate—ReStore is nowhere to be found. RIRRC, seemingly, has not invested much time or energy in publicizing ReStore.

“Only five to 10 percent of plastic bags are actually recycled,” McLaughlin explained to the Indy over the phone. The rest end up as litter or in landfills, bringing us back to the environmental impacts that plastic bags can have in the ocean. “Ocean health is a time-sensitive issue—it’s out of control,” McLaughlin added. While perhaps providing a better long-term solution for the issue of plastic bags, due to the lack of public awareness around existing bag recycling programs in Rhode Island, they do not capture enough single-use bag waste to render the bag ban unnecessary. McLaughlin admits that having reusable bags enter landfills is not a long-term solution for the bag issue. However, coastal states cannot afford to wait for longer-term solutions to become realities. McLaughlin isn’t sold on the idea that recycling programs are the best solution either.

From 2013 to 2016, the COA removed over 57,000 pounds of debris from the beaches and waters surrounding Rhode Island. Among the pollutants removed that year were 11,766 plastic bags. Yet plastic bags were only a small part of the problem. There were 42,561 cigarette butts and filters, 11,409 plastic bottles, and 18,730 food containers. Recycling programs might promote the idea that things can be used once and recycled without any consequences, a mindset that can transfer over to other non-recyclable debris. “Prohibiting plastic bags from being passed out at retailers is a good first step to get people looking at their footprints, then looking at all other single-use materials,” McLaughlin explained over the phone. Those single-use materials are a big part of what McLaughlin sees as a cultural mindset of disposability that is damaging the marine environment of Narragansett Bay.

“Fifty years from now, we might have great recycling,” McLaughlin conceded. Bag bans will severely cut the number of plastic bags in circulation, thus limiting the amount of ocean debris, and while it will lead to more reusable bags ending up in landfills simply by more reusable bags being used, the cultural shift it could create might outweigh those consequences. Councilman Florez hopes to capitalize on this cultural momentum and take action on other environmental legislation. “Straws end up in our waters too. There’s also potential to talk about the release of balloons into our atmosphere,” he told the Indy. “Newport is the preeminent seaside community in the Ocean State. We have a responsibility to be stewards for the environment.”