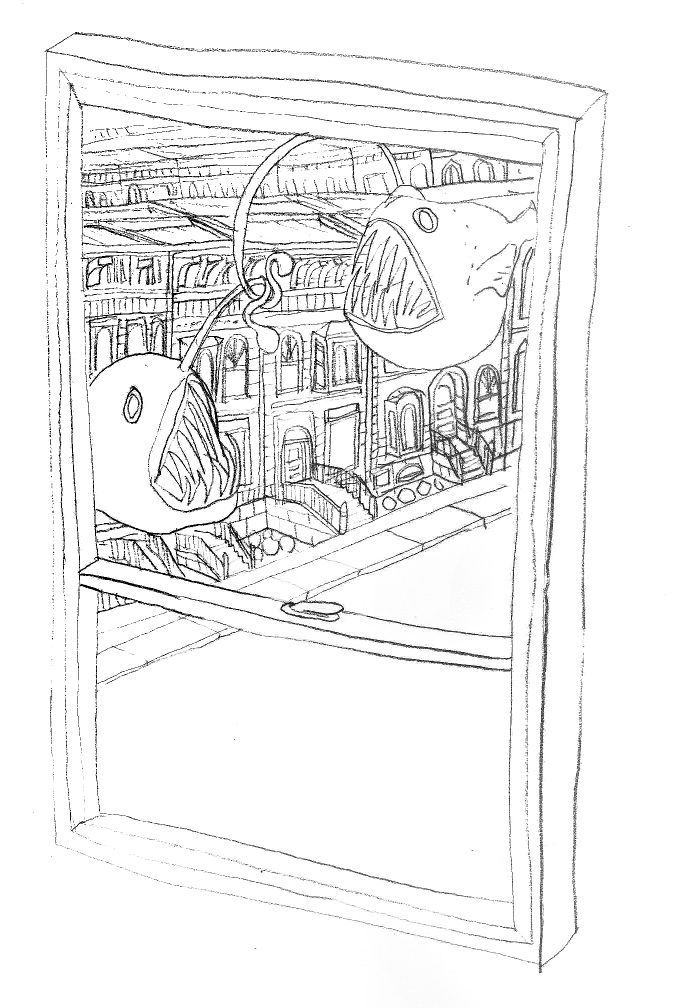 WHEN I FIRST HEARD THAT the deep ocean contained most of the earth’s habitable space, I didn’t really believe it because I didn’t know anybody who lived there. But about six months ago I was having coffee with Rick, and he said that two of his best friends from college had just moved there because the rent was cheap, and that a brunch place had opened up that they were all hoping would “really transform the neighborhood.” After that afternoon I started to hear about it everywhere I went. I would come into work on Monday morning and hear my coworkers giggling about how fucked up they were on the train ride back from a loft party down there, and how the dj was spinning records from the mid 2000s that everybody totally loved but had completely forgotten about, even though it wasn’t all that long ago. Girls started changing their location on OKCupid to “deep ocean” as opposed to the more traditional boroughs, which made it seem like maybe it was a burgeoning community.

I’m not old yet, so when my lease expired in September, I started to consider the idea of moving down there. I took one afternoon off work so that I could feel out the commute without having to worry about being somewhere on time, and I was surprised at how easy it was. It was a long trip, but it was a straight shot without a transfer, and I found it peaceful enough to maybe get some good work or reading done. On the walls of the train they had posters that read “Take the C train to the deep sea!” in mid-century style that made them look like they were telling you how to get to an exhibition at the World’s Fair. I felt like I was rediscovering a neighborhood that was part of the city’s rich history, even though in reality the subway extension had only been built two years earlier, not in the mid-century at all, but as a direct result of some irresponsible funding and one haywire housing development.

I got off the train and looked around. Only about half of the people walking around looked like I did, and the other half were just fish, which initially made me uncomfortable, but then I realized that I could get probably get a lot out of a culturally diverse neighborhood and that it likely meant there were already gourmet grocers and maybe a bakery or two. The train station hadn’t even started to rust yet, which I figured was pretty remarkable considering. The water was a lot colder than the water I was familiar with from swimming at beaches on the surface, but the idea of a place with its own climate identity was appealing. Maybe everybody would be united under the weather.

I met up with my sister Abby, who told me she’d show me around and introduce me to her friend who had a bedroom opening up, and not to judge too quickly when he insisted on calling his part-time barista work “freelancing” for Cafe Jed. Abby’s friend Sandro had a long face and the kind of stubble that made it clear he spent at least a couple nights a week sleeping somewhere other than his apartment, which I couldn’t place as either a good or a bad thing. We walked along the main avenue for about five minutes talking about shows we’d seen recently, and Sandro mentioned that he sometimes used the apartment to host live-audience recordings of his radio soap opera El Bandido Borracho, the name of which I recognized because its title character had a really strong presence on Twitter (@bandidoborrachopodcast). We passed a couple of cafes that looked nice, and one grocery store that had a poster for sea-salt caramels in the window, but I didn’t understand why you would buy them there when you could get better and more authentic ones from any number of storefronts down the block.

When we turned onto sandro’s street, I noticed that all the buildings looked really consistent, settled in a row with patches of moss in front and bay windows facing out. I’d never seen a neighborhood that felt so cohesive, but then Sandro pointed to his building, which was two stories taller than all the others and had a stainless steel facade with a garden on the roof. It also hadn’t seemed to develop any rust yet, and I began to wonder whether the salt water prevented stainless steel from oxidizing, because all the new buildings seemed to be made of that and panes of glass with a slight green tint.

We walked up Sandro’s steps and into the apartment, and right before we entered Abby gave me a look of “Hope this works out for you!” I’d seen the look before every time she tried to set me up with her best girlfriends, but I’d failed sequentially and then she stopped trying, so I thought it was really nice of her to help me find a place and I hoped I wouldn’t fail sequentially at that also. Sandro gave me “the grand tour,” which really just consisted of the kitchen/living room, his room, which had a bed vaulted above a desk with a bulbous silver microphone with an attached mustache that made it look like a nose, and the empty room, which was spacious enough but unfurnished so I had to imagine my way into it.

In my imagination, the walls were all off-white except for the one behind my bed, which would be the color of the Connecticut/Oriental/Vermont Monopoly spaces, which I always thought were blue but my parents told me they were gray so I still don’t know what exactly to call it. There was a table by the side of my bed with a lamp on it and the lampshade had a steam train going across. I had a floor rug with a stitched portrait of a dog in a bed so that I wouldn’t be sad when I thought about my childhood dog.

By the time I could really imagine the room as my own, I noticed that Sandro and Abby had gone into the other room. When I asked them why, they said they wanted to leave me “alone with [my] thoughts.” I looked out the living room window and into the deep sea, watching the bioluminescent fish swim past and light up the sunless waters in the places the streetlights didn’t quite reach. A pair of anglerfish floated across, their antennae tethered together. One bristlemouth chomped idly on kelp.

Sandro split because his shift at Cafe Jed was about to start, but he left me and Abby the key and told us to take as much time as we wanted exploring the apartment or the neighborhood. We walked outside and made our way slowly toward the train station.

“Remember when mom and dad would drive us places,” she said, “and we’d look out the window and dad would let me punch you every time we saw new buildings going up?”

“And you’d yell so loud, and after a while dad had to stop because we’d have drives where you were punching me the whole way.”

“I haven’t played in such a long time,” she said as we swiped into the train station. “It’s been a while since I’ve been in a place where it’s actually a game if you choose to play it, and not just a,” she paused, “a perpetual motion machine.”

“We could play now, I wouldn’t mind.”

Abby and I got on the train, and she punched me lightly in smaller and smaller intervals all the way back to the surface.