Week in the Munchies

It was 7PM, supper had come and gone, and our hero’s tummy had the rumblies, the phantom taste—his favorite McDonald’s cheeseburger—on his tongue. It was then and there that our odyssey’s protagonist, an unnamed but well-remembered eight year-old boy in East Palestine, Ohio, decided to take things into his own hands.

After reviewing a few instructional videos on YouTube, the boy nicked the keys to his (sleeping) father’s van. Never one to leave a child unattended, he strapped his four-year-old sister into the passenger seat and set off. According to witnesses, the boy followed all traffic rules, stopping at red lights and driving below the speed limit, although a resentful neighbor noted a failure to use his turn signals. Our dynamic duo pulled up to the drive-thru McDonald’s on Market Street, a half mile from their home, with no intention of taking any charity burgers. Instead, they produced a piggy bank filled with enough money to cover several Happy Meals®.

After realizing that they were not being featured on a YouTube prank show, employees at the chain called the police to escort the young adventurers home. Both were given cheeseburgers and fries on the house as compensation for their troubles. East Palestine police were impressed, if alarmed, at the feat, saying that they expected to see more damage or even an accident when they first received the report. But only East Palestine police officer Jacob Koehler truly got to the heart of the matter, reminding us all that The Internet™ is our real enemy here. “With the way technology is… kids will learn how to do anything and everything,” explained Koehler, no doubt pondering the immediacy of the singularity. “This kid learned how to drive on YouTube. He probably looked it up for five minutes and then said it was time to go.”

As he dries his tears, this reporter, a twice-failed veteran of the NY state road test, is forced to accept that maybe it’s time for us millennials to acknowledge our inferiority and clear the roads for these hungry Digital Natives. At the very least, the Indy spies with its little eye a new target market for Seamless. 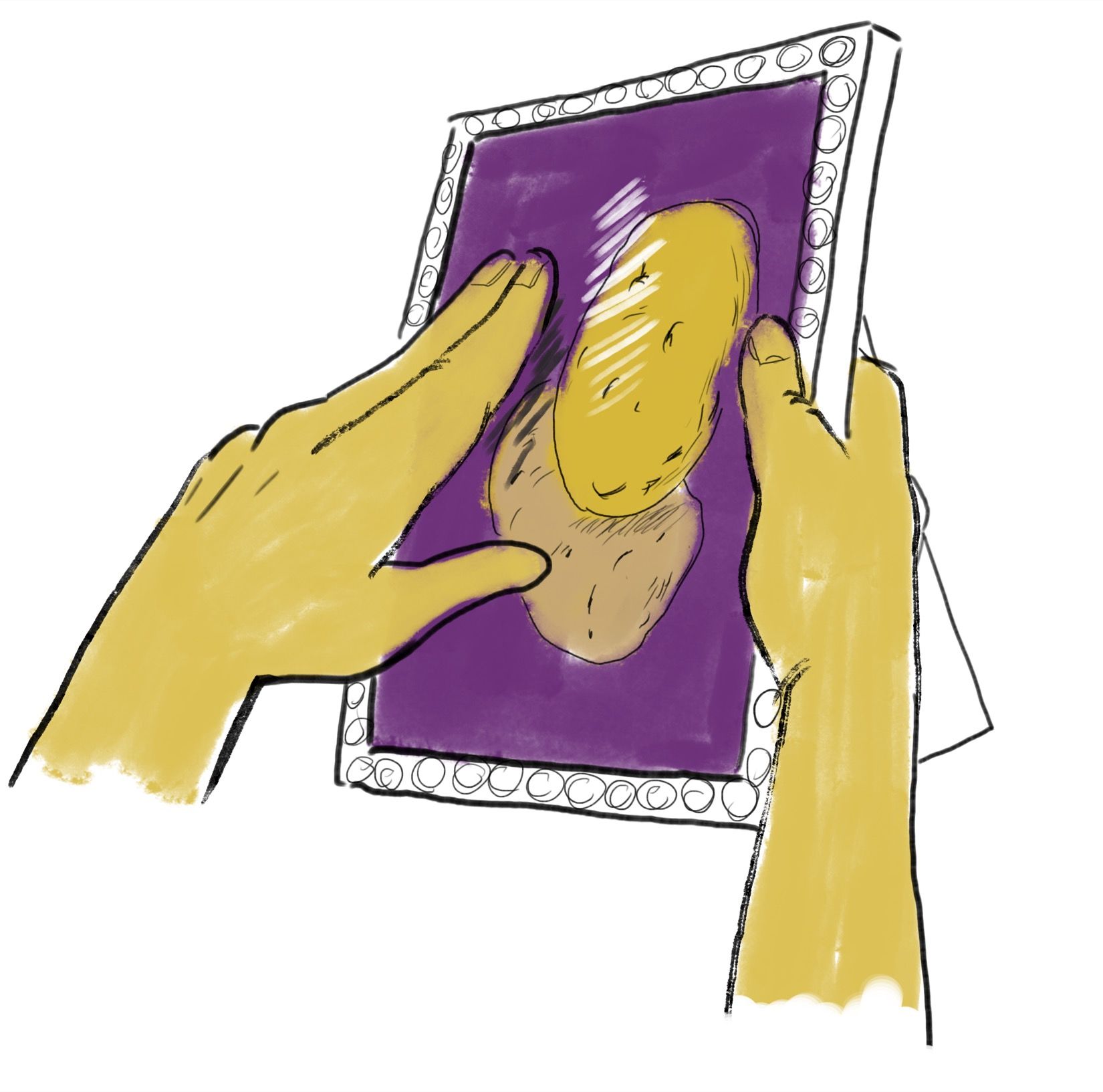 Japan is in a crunch. Last August, a record-breaking four typhoons hit the northern island of Hokkaido, Japan’s largest producer of potatoes. The typhoons ruined this year’s crop, throwing all potato related products into scarcity. The biggest loser? The Japanese snacking industry.

Alright, you’re asking, why is this so bad? Import a couple million canisters of Pringles and call it a day. Give the people what they want. According to Bloomberg, potato chips made by the Japanese company Calbee—the nation’s leading snack-food vendor—rank as the most popular snacking products in Japan. Forget Pocky. The people have spoken and they want their chips.

In line with global austerity measures, the reductions in chippage may be fitting. Fox News reported numerous import regulations limit the number of foreign ‘taters allowed in Japanese products. It’s the perfect opportunity to yell “Don’t tread on me!” especially because stepped-on chips are just shitty crumbs.

Images of Japanese grocery stores paint a bleak portrait. Rows of shelves sit empty. Calbee suspended production on its most popular flavors, including “Lightly Salted,” “French Salad Dressing,” “Pizza,” and “Plum.” Other rivals in the Japanese chip industry have also suspended production. As a result, hungry citizens have taken to alternative markets. Fox News reported that bags of chips are selling for ¥1,250 to ¥1,500, or about $12 to $14, on the auction website of Yahoo Japan Corp. Under regular potato conditions, a single bag usually sells for ¥130, or $1.19. Beyond easily accessible auction sites, the precious chip supply has inundated less official markets. Single-person vendors have been spotted selling bags on the street. Some are even enforcing a “one-per-person” limit to meet with demand.

Since the shortage began, the Twitter-sphere has been full of ‘tater-less tweeters. One customer reacted with halting optimism: “I realized how addicted I was to potato chips after the halt, I’ll be waiting for sales to resume. Hang in there!” (via Fox News). Numerous tweets are accompanied by images of empty grocery store aisles and captions of remorse. “It became difficult for the people to obtain potato chips,” one user wrote. Another tweeter posted only, “potato inflation state.”

The only hope for resolution lies in lightening import restrictions. As Rie Makuuchi, a representative of Calbee, told Bloomberg, “We’re doing everything we can to resume sales again.”

The future is uncertain. The public will wait for regulations to be changed. If they aren’t, Calbee and its competitors will depend on the next season’s harvest for a renewed spud crop. Until then, the shelves remain empty. The remaining chips will go to the highest bidder. Flavors like “Moist Mild Soy Sauce,” “Pizza Potato,” and even “Plum” are now reserved for the 1 percent.

Living with others is hard. For humans, cohabitation raises a seemingly insurmountable tide of petty conflicts. When in close proximity, two humans are prone to fight over attention, clothes, and food. And in the absence of parental mediation, someone will always come out on top.

This week, we received yet another reminder that rats are not immune to the problems of humans. Unlike their non-rodent counterparts, however, rat rivalries are much more photogenic. A recently uploaded Youtube video titled “Subway Rats Fighting for Food - New York Subway Rats Again!” depicts two little vermins (brothers, we assume) squabbling over a piping hot churro. The video, which has gained nearly 100,000 views over the past nine days, comes as part of a long line of ravenous rodents caught on cam.

A question: do rats have free will? Many conspiracy-prone forum-goers would say no. Zardulu, an NYC-based performance artist who was recently ratted out, has widely been cited by members of the online community as the force behind such beloved subterranean celebrities as pizza rat and selfie rat. There’s no definitive evidence at this point, but subway rat training programs aren’t out of the question. We think, however, that there’s something more primal at play here. You can’t teach a rat how to be a rat. Unless you are a rat...

The churro rats, as they are often referred to, are bringing something new to the canon of viral vermin, something not offered by their pizza-toting and pole-dancing brethren: drama. And this is perhaps why so many people are invested in their saga. The churro rats’ skirmish speaks to a universal experience of familial friction that extends well beyond the rat community.

Imagine this: two brothers walking through aisles of the local Costco, hoping to score some some lunch, maybe even a little dessert. What’s on the menu? Churros, hot and sweet. Mine! No it’s mine you ratfink!!!

Perhaps YouTuber kepingitrealdothesame proposes one solution to the eternal problem of cohabitation in a churro-filled world: “split it on half there’s enough for both of you don’t be stingy!”