How I Never Became an Internet Rapper 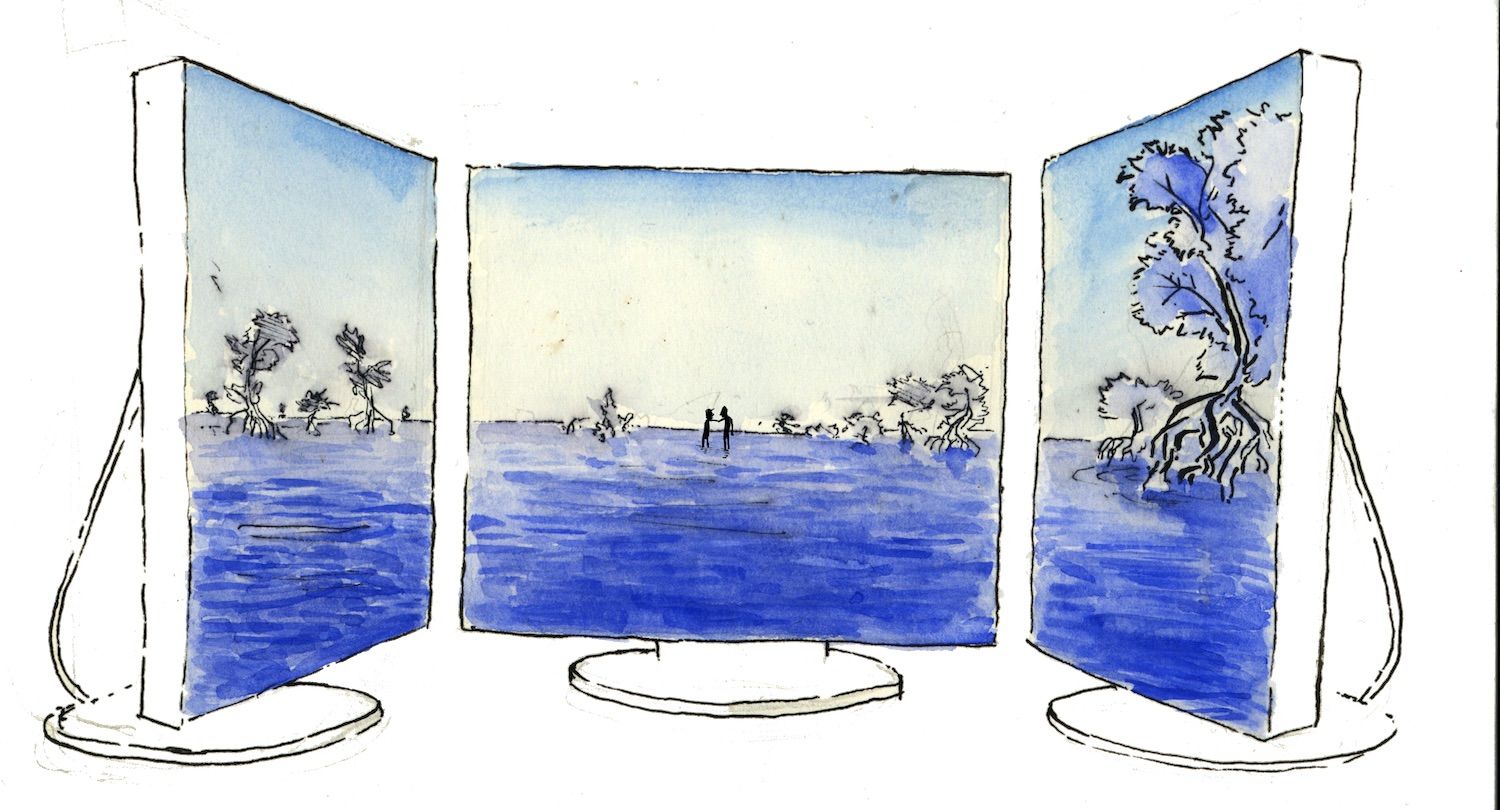 The frontier is an important kind of -topia for the Western imaginary. Media theorist Lev Manovich looked at computer games from the 90s as models of how we navigate virtual spaces. He underlined the notion that “narrative and time itself are equated with the movement through 3-D space,” reminding us of a now archaic mythology: the Web as the American Wild West. The adventures our computer games afford us are troubled by histories of the American settler, carving his ways into the unknown.

Iraqi. Refugee. Crossfaded and surfing perpetually through a sea of unknowns, Zahra is my host tonight and the following four nights. His face is scattered across the apartment; I first notice it plastered thinly across the fridge. Our interactions this week have been padded for the most part, couched in small talk and a quiet appreciation for each other’s clothes. Tonight, we are wearing similarly oversized fits. I read solidarity into our ability to blanket these lanky Eastern bodies. I didn’t even see you. Astonished that he isn’t the only one up at this hour, he edges closer. What are you—writing? I explain my practice poorly, leaving pauses for Zahra to interject and steer us somewhere new. Let me show you what I’m writing.

I am allocated one of his three monitors. Zahra has written a hollow black block of an ocean into existence. Above its surface, a sparse line of dark mangroves hover, gently hurdling into a beckoning distance. I tell him I like the color palette, wading through still waters. There is no avatar.

I test the left mouse, sending a blank human form into the void. I click again, tracing the tired trajectory of bodies flailing softly. Try hitting a tree. Making contact with the mangroves triggers something radical in their make-up: the branches petrify and emanate a series of cold emerald flashes before regenerating and continuing their linear buoyancy. The trees continue moving.

If there is a second level to this game, I cannot find it. The waters do not end. Wherever I float, the trees feel close, like how the moon chases cars. I make bolder efforts to master and alter the landscape. I rattle the left mouse, firing into a skyline littered with empty silhouettes before freezing them mid-air.

Disdain undisguised, Zahra remarks that I am playing the game like a fucking first person shooter.

I promise to be more mindful of the inert bodies, scrutinising their graphics. The bodies are so blank they look 2D, I begin to explain. Already, Zahra is toggling through alternative textures and color schemes on the monitor adjacent. By rendering these humanoid figures to match the derelict trees above, Zahra enacts a shift that feels elemental. Bodies and trees come raining down, dissipating beyond the horizon. The environment is refreshed—beautiful as ever, but a touch more cohesive. I accommodate the possibility that these projectiles are infinite iterations of Zahra. There is a strange comfort in the freedom of releasing and suspending the self to no end.

I like how you’re playing it, I just don’t think most people would play it this way. Zahra is scratching his frazzled hair. I divert my gaze as he turns to tap my elbow emphatically. What I want… is for everyone to play this game. But they won’t get it because they just won’t get it. Zahra disengages from this emotional lapse to unmute his computer. So there is a soundtrack. The noises are cluttered at first. Frenziedly, they flicker amongst a pool of piano keys until sweeping sharply into a four-by-four beat. A trap song? The dizzying familiarity spoils the ether. The mystic ecology of this game has cracked. The hi-hats are quantized in a way that convinces me trap cannot be Zahra’s signature sound. I ask where the music comes from, earning an indignant radio silence. I made it, he says, cocking his head. I like when people don’t know who I am. It’s funny.

I am an hour deep into this game before it hits me that I have already been acquainted with Zahra’s work. His music has found its way into my downloads folder from as far back as 2013. I urgently rack my computer for some vestige of his creative personae. I find one of his monikers embedded in the track credits alongside the names of people I might call heroes, representatives of New York’s influential alt-rap circuits. I decide to press him on it. His lips crease playfully and the stories roll through.

He recalls a time when Queens rapper Heems of Das Racist wore an obtuse headscarf to a music video shoot because he couldn’t recite his own lyrics. I deduce that my last Heems experience must have been further down the rapper’s sartorial timeline, some time after he had tweeted “taliban chic” into existence. The year is 2015: too far into his Xanax stupor, Heems has taken his pants off on stage. Members of the audience are denouncing his use of the n-word in a drivelling rant. “Look, I went to W E S L E Y A N,” he answers. I left the venue flanked by two good white friends who mused to each other about Das Racist (RIP) and the importance of brown man rap commentary in a post 9/11 America. Heems went on to lecture at London’s School of Oriental and African Studies days later, where students held the man accountable for his performance. Opening up about his struggles with substance abuse, he offered an apology that I’ve heard him say before, only reading it this time struck me harder:

“I’ve always felt bad about appropriating an artform that isn’t mine.”

Zahra chooses to lecture me on doing you and becoming somebody. I retain the following: I could be famous. I could be famous if I really wanted it, and Zahra wanted me to want it. Zahra’s throat fry is peaking. Eyes unusually glazed, Zahra looks like he might cry. If Zahra cries tonight, it is because he is not famous. There are never enough people tuning into his live-streams, engaging with the delicate facets of his character. It is the static truth that shows itself as he shuffles across his apartment floor, punching his keyboard and wrestling vitamins out of pill jars. Ignoring my request for something to smoke, Zahra corners me on the edge of his patio, where he demands that I pelt a glass bottle onto the street below. Now. Throw this. He shakes his head sadly as I sidestep him. That’s the problem. You don’t write games—you just play them. I nod, confused. Word games, I suggest tentatively, are something I do. But you can’t show them to me. I nod again before flinching as Zahra open-palm slaps me, catching the side of my head. My skin feels raw against the wind, but I feel outside of myself this morning.

I am reminded of a line from Antoinette Rouvroy, who once wrote that the virtual is about conceptualising the self outside of oneself. The virtual dimension produces a “melancholy arising from the inescapable experience of never being able to own or possess oneself, with an attempt to recollect oneself over time—” The worlds that Zahra codes late into the night are mathematical proofs of a man working himself mad for recognition. Zahra’s music has taken him places, but it is the prospect of moving out and moving on that pains him the most. The mystery of Zahra’ sadness is no longer a crypt but an open patio, two stories above concrete.

Zahra apologizes, caressing the side of my face for a moment before pulling me in for a hug. The next time you’re in the city, I won’t be living on Nostrand Ave. Swivelling beside me, he points to a white box down the street that will soon flourish as an Urban Outfitters or American Apparel. He spits in its direction, chasing it with the butt of a cigarette. Time moves differently for a refugee.

Zahra collects himself when the time has come for crooked cops to collect their cut from the club downstairs. We peer over the rooftop together, watching bottle glass crunch under their boots. In one final gesture, Zahra tells me that I will never be shit. Not ever.

CJ PARK B’17 always felt bad about appropriating artforms that aren’t his.