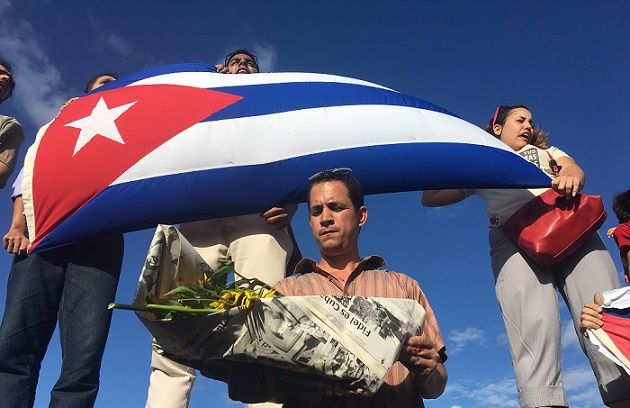 Fidel Castro, leader of the Cuban Revolution, died last Friday. His brother, Raúl Castro, currently the head of the Cuban government, announced the passing of the revolutionary in a brief message broadcasted on national television: “Beloved Cuban people, it is with great pain that I must share the news... that today, November 25, 2016, el Comandante en Jefe de la Revolución ha muerto.” The death of Castro, one of the most controversial political figures of the twentieth century, has unsurprisingly spurred heated emotions around the globe. Whether it is recalcitrant hatred or devotional love, we all seem to have strong feelings for Castro. In Miami, Cuban-Americans, a diaspora that heavily opposes the regime, began celebrations on Calle Ocho as soon as the news was received. For the Cuban community in Miami, Castro’s death represents the end of an era of political oppression, an opportunity for change in an oppressive economic system, and even the possibility of returning home. US media outlets describe the Castro legacy as one marked by political prisoners, the repression of press freedom, and the absence of democratic elections. Meanwhile, in various African and Latin American countries, where Castro is a symbol of Global South power and resistance to US imperialism, crowds gathered outside Cuban embassies in capital cities to pay their respects. Here, the media cite the achievements of the Revolution in terms of education, health, and reduction of crime. In the upcoming days the ashes of El Comandante will travel across the island, giving the people of Cuba an opportunity to say a last goodbye to the leader. What will follow is a time for reflection, remembrance, and speculation of an uncertain future.

It was a little after midnight. I was at Corner’s café, one of the many bars that appeal to a specific sector of Cubans who can afford it. Los Boys, a local band, plays funk and rock covers. Another night in La Habana; one of the few I have left. My friend from Chicago, who was outside of the bar talking with a Cuban friend, signals for me to come outside.

He delivers the news: “Seba, Fidel Castro just died. I’m not lying. Raúl Castro just said so on TV.” It wasn’t a lie.

Outside of the bar, I saw some people on their phones, all of them talking about what had just happened. Inside, people are still listening to Los Boys. I don’t know what to feel. I don’t know what to say. I just observe. I leave Corner’s and head to my apartment, which is close by, to check what’s on TV. As soon as I turn it on, I hear Raúl Castro’s message again. Now I finally believe it. Fidel has died.

I return to Corner’s and I find the bar empty, the employees cleaning up. I ask one of them what happened with the show and he tells me, “We stopped it halfway through…I am not sure if you already know but el Comandante has died.” I leave with my friend and go to the house of the bassist from Los Boys, which is also close to the bar, because it’s his birthday. And at it is at this point that something I would have never expected to happen after such a historic event takes place.

Yes, the night that the leader of the Cuban Revolution passed away, we ate cake. It wasn’t planned, we already had everything set up. On the night that one of the most important men of the 20th century died, we celebrated the life of my friend, the bassist. Yes, the night that Cuba changed forever, no one in the house said anything and we took out our instruments and played music. Happiness reigned over any feeling of uncertainty and sadness. Or perhaps those feelings were so strong that they collectively agreed to not show them. Or perhaps they showed them through their laughter and musical improvisations. Or perhaps there was no sadness. The truth is I don’t know, I didn’t ask. I don’t think I’ll ever know. But what I do know is that the night in La Habana was very far from what it was like in Miami.

Saturday morning arrives. I receive a text from one of my Cuban friends, a fellow student, inviting me to come by the University. Professors and students are leaving flowers on the staircase in front of the famous statue of Alma Mater that marks the entrance to the University of Havana. I walk to the University from my house. The street is relatively empty. There are only a few cars. You can feel the silence. To get to the staircase in the University I have to pass by Ignacio Agramonte plaza. One of the streets that surrounds the Plaza is full of messages for Fidel. Once at the University, the security guard asks me for my student ID. I’m shocked. No one’s ever asked me for it before. They never ask.

Many people are wearing black. At the law school there’s a short line to write notes to Fidel that will later be sent to Fidel’s family. The students are emotional. The air is heavy. Of course, I also write a note.

I arrive at the staircase. Emptier than I had hoped. The students walk slowly. The masterly voice of Mercedes Sosa signing La maza and Vengo a ofrecer mi corazón sounds over the loudspeakers.

Then another one of my friends, from Honduras, calls me to let me know that el Instituto Cubano de Investigación Cultural Juan Marinello (the Juan Marinello Cuban Institute of Cultural Investigation) is hosting an event to celebrate the legacy and life of Fidel that is being organized by el Colectivo Pangea (the Pangea Collective) and Proyecto Nuestra América (Project Our America), social organizations focused on political and social justice education.

At the event there are around 40 people, all of them young. They carry flowers in their hands, some banners, and a couple of Cuban flags. We go to the street. We arrive at calle 23 in the neighborhood of Vedado at the intersection with calle L, a very busy corner. Once there, we head down calle 23 until it meets the Malecón at the ocean, screaming slogans like “¡Fidel, Fidel! ¿Qué tiene Fidel, que los imperialistas no pueden con él?” (Fidel! Fidel! What is it about Fidel that the imperialists can’t handle?) “¡Viva Fidel, ahora y siempre!” (Long live Fidel! Now and always!) “¡Compañero Fidel Castro, presente!” (Comrade Fidel Castro, present!).

People on the street take out their cellphones and start recording. Cubans with cellphones record everything. Almost no cars go by. An American couple stops me to ask what I think about what’s happening. More Cubans have gathered by now.

Now we’re at the Malecón. Some poems are read about and for Fidel. The group makes a circle and in the center a young boy holds a boat made of newspaper, onto which people leave flowers and say a word or more about what Fidel meant to them. The environment is a contrast with that of the University. Here, there’s a more lively tone, more energetic, more explicitly political. The event culminates by offering the newspaper boat to the sea like a symbol of a new beginning for the Cuban Revolution. By coincidence it was the morning of November 25 1956 that Fidel disembarked from Mexico to Cuba on el Granma, as one of the members at the gathering reminds us. On my way home along calle 23, I notice that the movie theaters are taking down signs for the films and other cultural activities scheduled for the coming days. Arriving home I see that the teatro Mella doesn’t have a single letter on its marquee. This week, the movie is in the streets.

[Originally published in Spanish in Diálogo.]