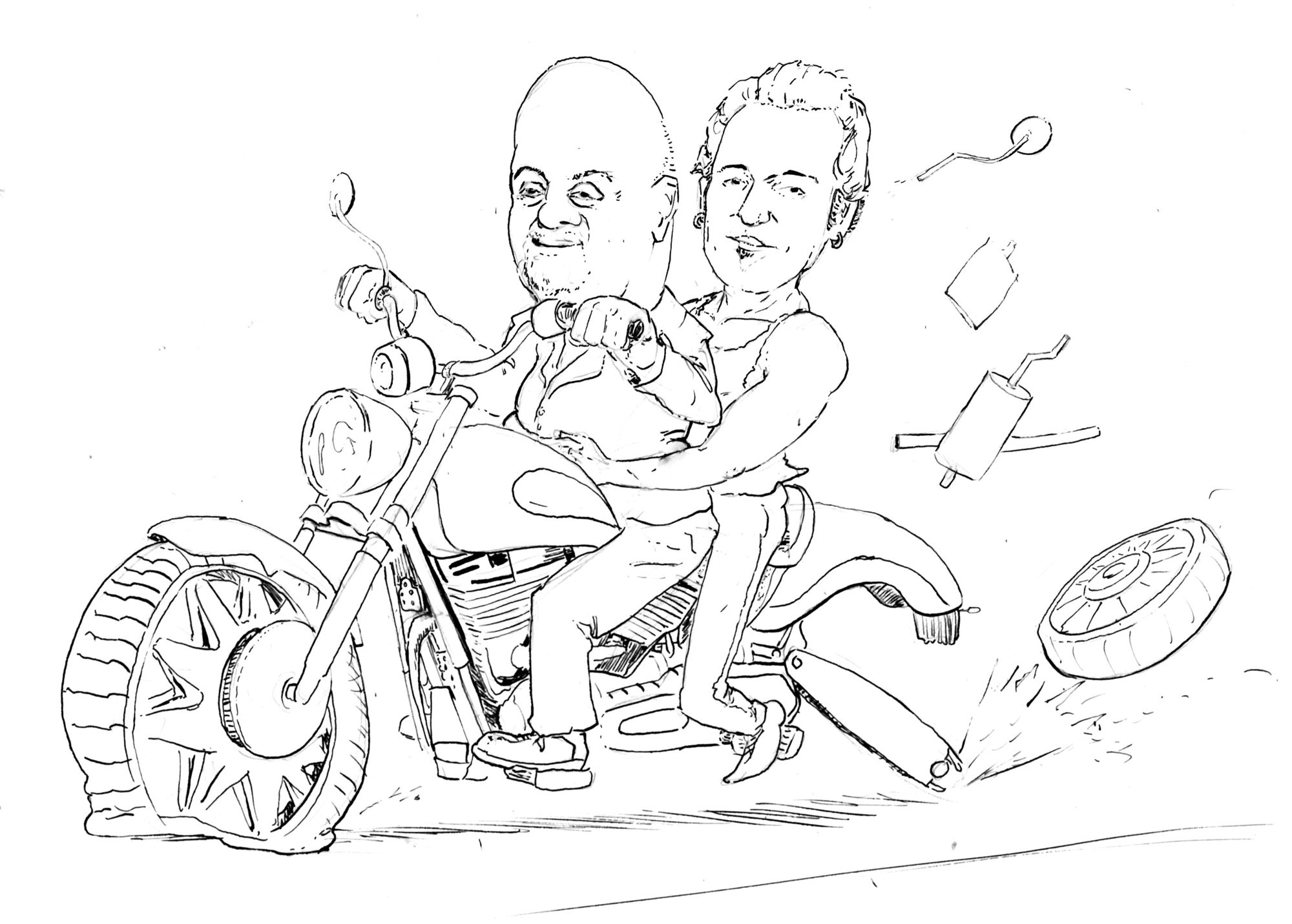 Bruce’s steed had never failed him before. Springsteen trusted the motorcycle, built for him piece by piece by his friend Billy Joel, and each time he revved its engine he could hear Billy’s promise in its whir, feel his human touch in the bike’s vibrations. As the Boss set out from his Freehold, New Jersey home this Veterans Day, Billy’s horsepower gripped between his thighs, he expected a typical ride through Freehold’s backstreets. After a few short hours of racing in the streets, however, Billy’s beast broke down (he never did have the endurance) and Bruce found himself stranded, a wreck on the highway. The star found himself with no option but to take the long walk home into town, or simply to wait on the roadside rocky ground for a passing state trooper of highway patrolman. In his sad eyes, Bruce entertained a vision that old Billy would drive all night to take him into his gentle arms (those were lonely days after all).

Alas, luck struck for Springsteen not in the form of Joel’s pink Cadillac, but in the form of locals Dan Barkalow, Ryan Bailey, and Bob Grigs. The three motorcyclists, all veterans, also expected a casual tour of Freehold’s finer roadside gems as they mounted their bikes that day. To their surprise, one of those gems was that vision in leather, daddy in denim, steel-eyed stallion of sweet Jersey dad-dreams, the Boss himself. Barkalow admitted being a bit starstruck at the encounter, but after Springsteen hopped on the back of his bike (parting with Billy’s masterpiece, sweet sorrow) and bought the gang a round of drinks, the group said he was just a “down-to-earth guy” who had seen better days.

After a few weeks of dodging Bruce’s late-night calls and voicemails (“having restless nights, Billy, take me back in your arms”), Joel paused his set at Madison Square Garden on Monday to admit that he had built Springsteen’s bike at the bike shop he owns—the esteemed 20th Century Cycles in Oyster Bay, Long Island—and apologized to the artist with a cover of his song “Born To Run.” “No good deed goes unpunished,” said Joel, as his phone pulsated gently backstage with Bruce’s customized Rosalita ringtone.

Springsteen was spotted later sitting in a dark corner of a bar across the street. “I’m on fire, Billy,” he whispered. “Our glory days have yet to come.”

Mitt Romney and Alexander Hamilton walk into a bar. They sit down and have a nice drink—a crisp cider, or maybe if it’s Mitt’s choice, an ice cold Keystone Light. When they ask to close out their tab, the barback passes them a crumpled manila envelope. Inside: a few misplaced documents, including a bullet-pointed list of policy roll-outs and a blank check from the Trump Organization. Additionally, a piece of scrap paper with ripped edges and a belabored cursive outlining a request for an apology:

Dear you two irrelevant/dead politicians, I demand an apology. Your actions made me, a cis white male about to assume the most powerful office in the world, feel small inside. While I fundamentally don’t understand guilt, I am sure that you feel guilty about this. While the city of New York is spending $1 million to protect me from any consequences of what I say and do, they are spending $0 on protecting my ego and fragile heart. I will require you to find the highest platform from which to shout, “Trump is really just a great guy!” Preferably your Twitter account.

It was clear from the letter that Trump had a special spot in his vengeful heart for Hamilton. Listen, I’ve always loved the theater, he wrote, and I have always stood behind the kind of conservative values promoted by  productions like Jesus Christ Superstar and Annie, Get Your Gun, I assume. But I have never believed that yelling ‘fire’ in a crowded theater constitutes free speech, and that goes double for yelling that my vice-president-elect ‘believes homosexuality is a choice that can be freely discriminated against with the support of a higher power’ in a theater. Singing and dancing is alright with me in a pent-up way, but I won’t stand for such violations of expression!

In a section directly targeted toward Mitt, Trump writes in an attempted shorthand—Play your cards right and we could be half-smiling at a dimly lit table in my restaurant. That’s an honor, believe me, it’s harder to get a reservation there than a spot on my cabinet, there’s some very important people who would tell you that. And if you’re lucky, there might be a young garlic soup with thyme and sautéed frog legs in it for you.

Under a signature sized to compete with John Hancock, Trump ends with a postscript, because, after still complaining about the media’s campaign coverage three weeks out, postscripts have become his sort of thing. PS: you can be Secretary of State too, if we go Dutch.

People of Sweden, we fucked up—again. We, your humble Gävle goat committee, have failed you. I, Eje Berglund, Gävle goat spokesperson, am eternally ashamed.

We had security guards, and they were bribed. We had cameras, too—they were hacked. We also had fences—ok, admittedly we didn’t try that hard on this one. We opted for some rustic old Swedish fences, likewise terribly breachable and wonderfully pleasing to the eye. Why haven’t we made this damn goat fireproof, you ask? Well, we caved and tried that five years ago. The fireproof glaze turned our beloved yellow goat brown. This simply wasn’t passable—an insult to our Swedish aesthetic. A brown goat is basically the same thing as a burned goat.

This year’s beloved Gävle goat was tragically set aflame à la Molotov Cocktail last Sunday, less than 24 hours after its unveiling. It was the 35th to be destroyed in our tradition’s 50-year history. Sure, the creature is made entirely of straw, but that’s not an invitation to whip out your lighters. This gentle giant is built to celebrate the Advent, one of the most important holidays in this country’s history. It also cost us $250,000 to build, so, yeah...thanks a lot, jerks.

What is this fascination with fire, seriously? Every year, we build this majestic 42-foot-tall goat, only to have it desecrated and demolished by hooligans. Worse, sometimes these vandals aren’t even Swedish. Anyone remember 2001, when that American guy burned our goat, and made no intention to flee? Legend has it he just tossed on a pair of Raybans and oogled until the handcuffs snapped around his wrists.

We’re sick and tired of cleaning up giant piles of goat ashes, to be fucking frank. Why can’t you guys just leave the poor thing alone? Think of the kids. Do you have any idea what it’s like to watch the joy of your child suddenly crushed when they see the goat collapse into a pile of char? I take my children to this celebration every year; this year, my daughter didn’t even want to go. “It makes me too sad to watch the big goat eyeballs burn off the big goat head,” she told me. She’s nine.

My son hasn’t talked to me in a week. I’ve received several reports that he’s been skipping school. His Google history over the past three days consists of every conceivable combination of the phrases “lots of fire,” “pyrokinesis,” and “ruining Swedish history for dummies.” Tonight, I found lighter fluid and a kitchen lighter in his backpack. You criminals, you have no sense of decency! You are ruining my family!  Let the goat live!